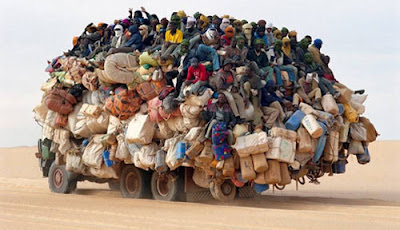 When I laid my eyes on this photo I immediately thought of a typical "Smith" sidecar loading scenario. 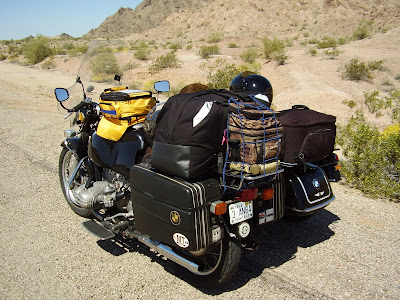 There is actually a motorcycle, sidecar and passenger in there somewhere!

After years of riding solo motorcycles, one of the thoughts I had about side car riding was" We can haul more stuff"
Well ,as these photos show we have been been very successful with that task. we sometimes go out for a week so there
are numerous items we always think we need. Darian must have her favorite pillow, which of course is understandable.
It has volume but no weight so I have no issue with that. Besides, if she's happy, I'm happy. Every time we travel I
attempt to ween down the "stuff". Obviously I'm not having much luck at that. I've got it down to a somewhat clean (in my opinion)
looking pile . I try to stay away from "bungee' straps and have generally succeeded in that. 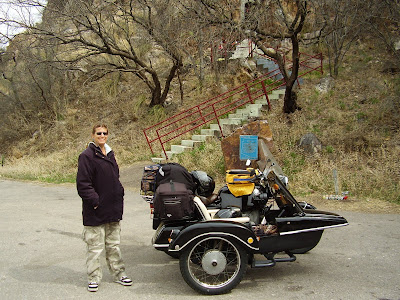 Check list: Let's see........two sleeping bags, two inflatable sleeping pads (one with a leak that Darian always seems to get), two small camping pillows, One tent, two chairs, Darians' favorite (leopard skin motif) blanket, stove, extra fuel, frying pan, coffee cups, a couple of changes of clothes, two thin towels....It seems that those are the main necessities. So what the hell is the rest of the stuff? ......tools, more tools, enough spare BMW parts to rebuild 3 bikes, did I mention tools? My tank bag has crap in it I have never used, but "maybe I'll need it some time" is my answer to that. Every year I inventory the tank bag and " Jeez I wondered where that was" is always repeated. The trunk on the sidecar is kind of an "over flow" deal so we can stuff our extra coats in when the day warms up. additionally is two sets of rain gear, drinking water, a bottle of booze (for me of course), two tent tarps, my faithful, always -included -army surplus canteen, enough batteries (some dead) to power part of Denver, three extra flashlights that I never use, A psychedelic spinning fan, ( in case of a flashback from the 60's), four or five different knives, an extra (crappy) camera , binoculars (which I try to use once each trip to justify them). Let's not forget the portable DVD Player for those early to bed nights. My shortwave radio, which works some of the time, (the batteries hemorrhaged at one point), Cooking utensils, a folding wash basin, a portable wind screen for the stove, the stove container (which is also a cooking pot - slow aluminum poisoning for one and all), 10 extra bungee cords (which I never use, but "just in case"). I know I've forgotten a bunch of stuff. Like I always say, "I know it's here somewhere". I occasionally carry my portable 1960's Travel Aire Bar (platter, 4 cups, utensils, three bottles), My 9MM pistol with extra ammo. Oh yea we always carry a pair of flip-flops for both of us, extra gloves, four different stocking caps/neck warmers/hats, two cell phones (why 2?) a couple of books for when we've finished with the DVD's, a couple of outdated MOA "anonymous" books, (hand me downs from my brother), a few old "Air Mail" magazines, shop rags, paper towels, napkins, rubber surgical gloves, (I have an aversion to greasy hands/fingernails after being a mechanic for a few years). Wow, we haven't got to the food , utinsels, personal hygiene, the portable table I sometimes "need", and condiment section yet. I think you get the point.......There's no hope........... 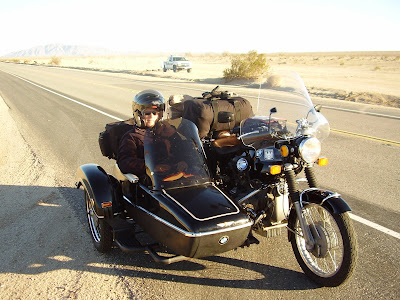 I'm actually fearful to weigh the loaded machine. I know it would scare me......

There is definitely no "hope" for you... But instead you have given "me" much hope, the good kind... the one that fills my Soul.
Thank you for your wonderfull and fullfilling comment on my site... Thank you...
Hope to see you down the road sometime soon...
Be well... Ara & Spirit