WOW....November has come and gone!
Officially retired a couple weeks ago and am enjoying the concept of not returning to work.
My job for the past 16 years had become a burden and any sense of enjoyment had long since disappeared. I averaged over 600 hours overtime each season for the past 5 years....one season logged over 900 hours of overtime from April thru November. The physical toll was evident. Plus the fact that the employer left me "short handed" on most the projects I had. I actually started / completed 4 small projects with no help whatsoever last Summer. Enough was enough.....maybe they had in mind for me to give it up?...I don't know and at this point it does not matter.
Last Winter was a "Working Winter" so I fell behind on motorcycle projects for the year.

We arrived in Arizona in early November, spending over a week traveling South. Spent a few days in SW Montana visiting friends & family....then a leisurely trek to AZ. A short taste of Winter hit Montana about a week after we left so our timing was perfect.
Upon arrival, time was spent cleaning up the Smith property in Fortuna as we were only here for a couple weeks last Winter. Darian has planted a lot of flowers and rebuilt the planting areas. Even a tomato plant!
I prepped our sidecar rig and we decided to attend the "Airheads Mecca Beach Campout" the second week of November. A nice easy ride over & back and weather was perfect. Quite a large turnout and had a great time. Saw lots of friends and made a few new ones too.

Made the obligatory stop at  Glamis CA....then to our typical Taco Shop in Calipatria CA.
['click" to enlarge images] 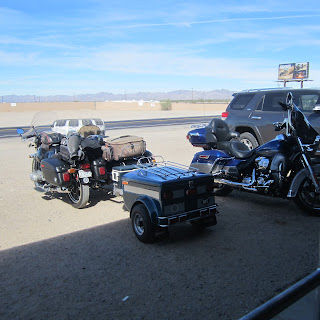 Arrived at Mecca Beach mid afternoon and set up camp. Quite a few acquaintances were present. 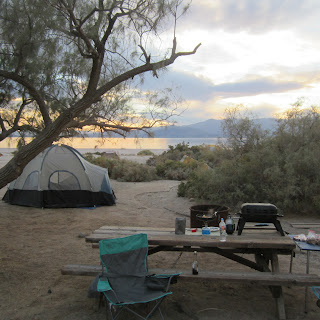 Weather was ideal and hardly a bit of a breeze. 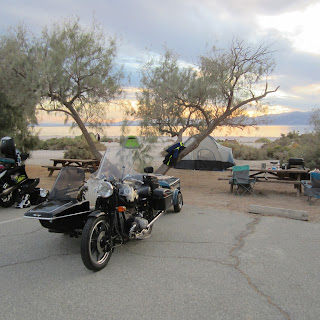 A San Diego "Adventure Riders" Group joined us this year. 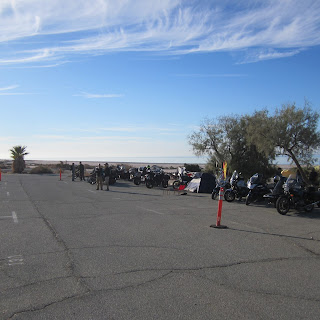 Three sidecar buddies from the Las Vegas area showed up. Two of these guys rescued us a couple years ago when I had electrical issues with the sidecar in the Vegas area. 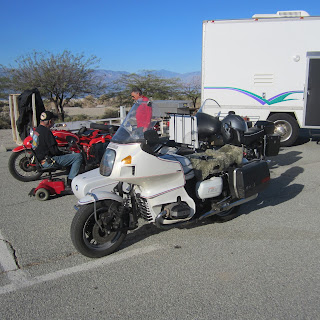 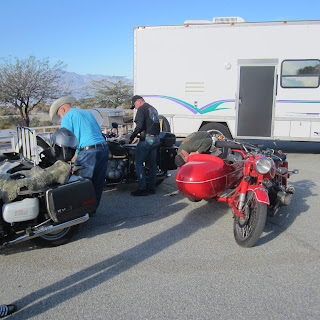 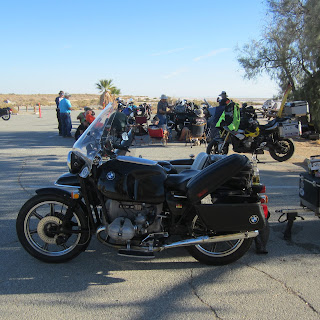 One downside to having a lack of wind were the swarms of gnats present this year. 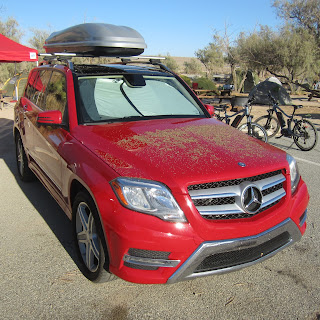 "Gnat" closeup...there were literally thousands of them...cooking was a chore. We luckily completed cooking before they swarmed in. 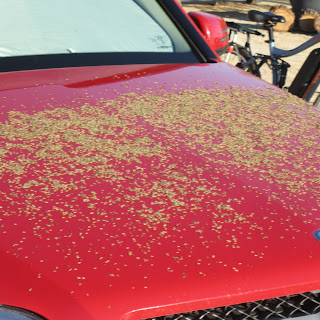 We spent one afternoon over at "Bashfords Mineral Spa" and took in there Hot Springs.
Uneventful ride to and from and had no issues. Great weekend.

Honda gold Wing was way overdue for tires so finally took on that chore.
Initially didn't order new tubes but after installing rear tire with old tube, had a "no go" tube, leaked.
So I ordered new tubes, (which I should have in the first place) and finished up when the tubes arrived. Purchased some expensive Michelin Tubes but they are at least 3 times heavier than the crap tubes which were on the rims. 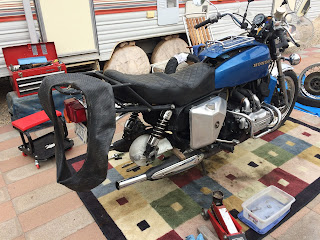 Fighting the rear tire off / on was a struggle.....times two since i had to remove it again and install another tube. Called a local small bike shop but he wanted $48.00 per tire to mount with me bringing in the wheels. With tax over $100.00., so I forged ahead and performed the changes with my hand tools. Luckily I have quite a selection of different tire irons to do the job. 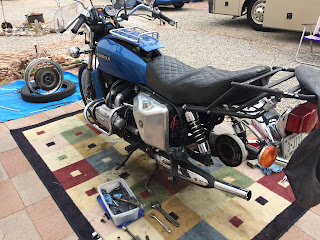 Changed the oil & filter while I was at it. Today I accessed the Weber Carb and installed a choke wire to manually apply the choke. Have ran it for the past 4 years with no choke, but didn't really need it. Carb has an accelerator pump so twisting the throttle enriches the carb for cold starts, but it take a bit of  "cranking" to pressure fuel up with the fuel pump. Choke application seems to speed up the process when cold. I noticed the air filter element appears poor....so ordered two replacement elements. Filter element appeared to be overly "porous" upon inspection. 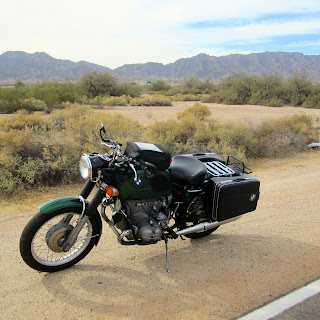 Brought the R75/5 out and performed maintenance on it. The oil filter tube had a "fouled" bolt end thread, which resulted in the tube threading out of the engine block each time I went to remove the filter.  Finally found a replacement tube on EBay last Summer so swapped it out.
Also changed all the gear lube reservoirs re: transmission / driveline / final drive.
Front brake is not functioning as well as it should so pulled it apart to clean / lube parts there. Still seems to be "dragging" a bit. Will require further attention. 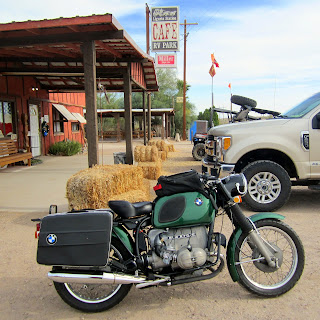 Took the /5 out for a little ride after servicing. Mounted a tank bag which I received from my Brother. I've never had a "strap on" tank bag which I really liked, but this one is great. A bit more of a hassle when refueling  but very secure. High quality, hand made tank bag that my Brother used lightly. 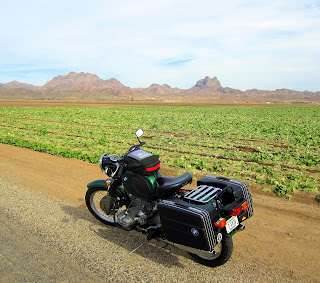 Harvesting in progress at some areas. Very green in the irrigated Dome Valley. 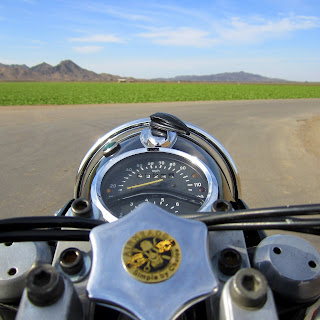 Still have a list of "major" projects for the sidecar but will take them on in due time! 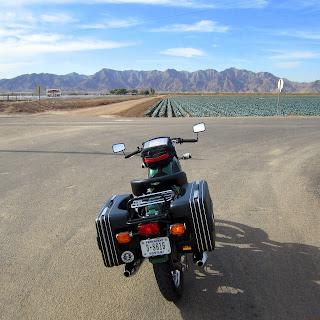 Christmas Season in the Dome Valley. 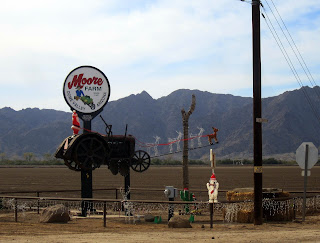