We took a couple hundred mile loop today across a small section of the Crow Indian Reservation.
A common scene in these parts: Teepee Poles stored against a tree. Nearly every place you pass mimics this scene.
('click' on photos to enlarge) 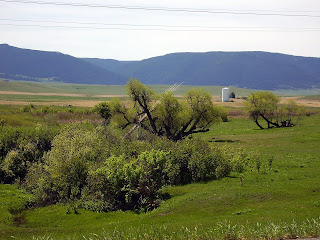 The Beartooth (Absaroka) Mountains in the distance. Recent snow covers them. 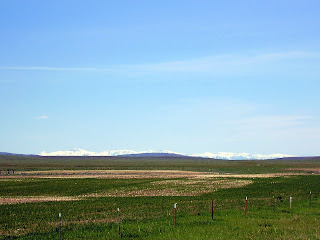 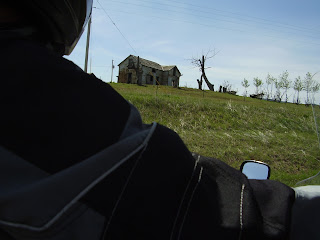 The Pryor Gap in the distance. A rough road will take one through the "Gap" and up into the Pryor Range.  Crow legend speaks of the "Little People" who inhabit the mountains here.
There are numerous back roads throughout the area. One leads up to the "Dry Head Overlook". Another will take you all the way to Lovell Wyoming. Last time I was up there after heavy rains, (30 odd years ago) the roads were very bad and impassable into Wyo.
In the 1800's, an attempt was made to tunnel through one of the mountains for a railway line. I've read that many Chinese laborers lost their lives in the futile attempt. The unfinished tunnel still remains. 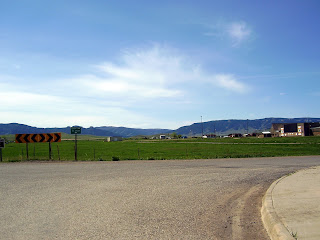 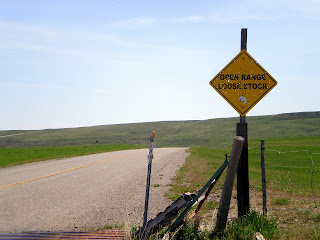 Recent rains turned the waters brown....Beavers have apparantly been busy. 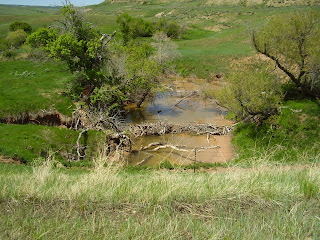 Stopped for a quick break..... 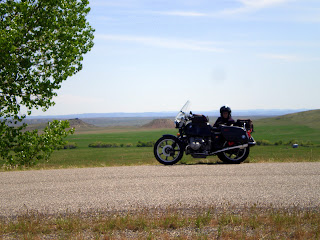 Said "A-Ho" to a group of Crow Horses. The Crows are / were well known for their fine horses and horsemanship. I think a couple of the critters had some "mule" blood in them. 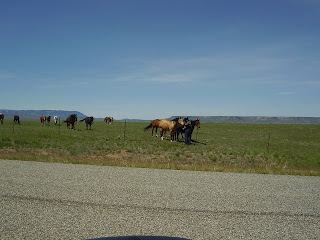 Our trek eventually took us over to Fort Smith MT. One of my best friends family used to operate the only gas station / repair shop in the town. Spent a lot of time hanging out there in the early 70's. The station has long since closed. The area is now a popular fishing destination. Quite a few folks have guide services for floating the Big Horn River.
Yellowtail Dam....525 feet high....1485 feet long. My older Brother worked on the construction of the Dam in the early 60's. Foot traffic isn't even allowed on the Dam anymore....likely a victim of the "Homeland Security" paranoia. 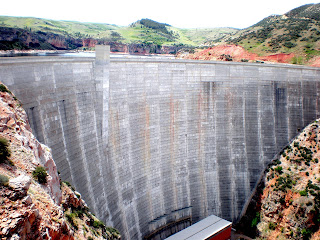 View of the Dam from the South. 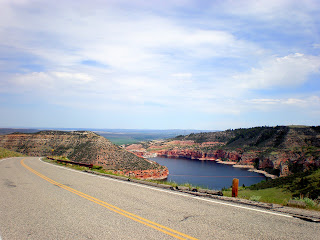 Rode down to the "OK-A-Beh" Marina. Used to go boating with friends on the lake. Spent many days water skiing / fishing years back. Talked with the Marina Concession dude, they have some sort of fuel line problem so fuel for the boaters isn't available. Quite a few folks out on the lake it appeared. The water would be way too cold for skiing this time of year. Even in the heat of the summer the water is always cold in the lake. 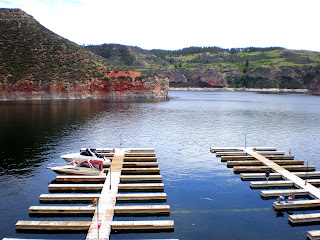 Heading out of the marina area. 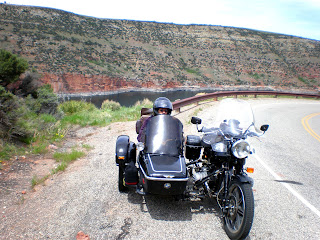 The canyon winds for 70 some-odd miles into Wyoming. Fantastic scenery. Very remote areas which are off limits to non-tribal members. Years back we ignored "postings" and hiked / climbed into many off-limit areas. That would bring steep fines and probably jail time nowadays.
Around the corner of this view was the first marina for the lake. It was called "Frozen Leg" marina. A local had blasted a road through the rock and constructed a treacherous road down into the canyon. They charged to haul your boat in / out. Boat owners were not allowed to haul their own boats on the road. Years later, after the road had been closed, I drove down the trail with a friend in his CJ-5 Jeep. The ride down was terrifying due to washouts and sections of the road that were pretty much gone.  I doubt if the road is even usable today. We walked down the road in the early 80's and then climbed up the canyon wall to some old caves on the cliff walls. The climb up was very dangeous and steep. The final 30 feet or so were nearly vertical. Back then there was an old Geologists chain ladder which had been left in place. I don't think a person could have got to the cavern entrance if the ladder wasn't there. Indian Pictographs were painted on the cave walls. There is a series of  caves which have different levels. One cave was covered in crystal formations. Other small openings lead to large caverns which weren't accessable due to the small openings. These caves are all "off-limits" these days. 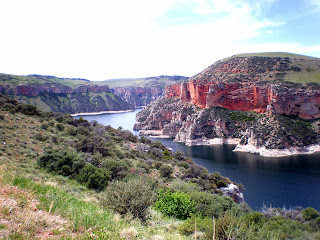 Stopped in St. Xavier. The derelict school was once a very nice place. I played basketball there as a kid. Now it has been vandalized and pretty much destroyed. Not a window left in the building. 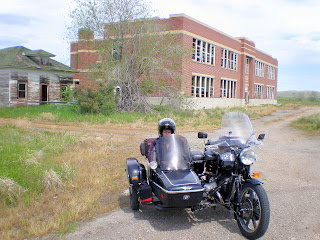 Had a nice little ride with minimal wind and near zero traffic. Covered just over 200 miles. I hauled an extra bit of gasoline with us but didn't need to use any. Hit the "reserve" valve at 150 miles so could have gone another 50 before running dry. The Heinrich Tank holds just over 8 gallons...the bike typically gets around 25 - 30 MPG running at lower speeds. Spent most of the day plugging along at 50 - 55 MPH.
My "pusher" tire was looking pretty thin when we left home and even thinner when the days ride was over. Funny how fast tire tread vanishes when its' life is coming towards its' end. The tire I'm running has actually lasted 1.5 years. It is a "trials" type tread tire I bought in L.A. CA. winter before last. Only bought it because it was all I could find in L.A. Probably has gone around 2500 miles. Doesn't sound like much but pretty good for this bike. The front tire / sidecar tires typically will live through two "pusher' tires. I have a full set of new spares in my "shed" so will swap out the pusher some weekend. My Work Season will be hitting full speed soon so motorcycle riding will be very minimal pretty quickly. We'll be traveling all over MT. WY. SD. and eventually NM before the Summers done. We'll probably be living out of Motels for much of the Summer, sadly with the motorcycles left behind.
Posted by BMW HACKER at 9:45 PM No comments:

Not much new around here. Haven't fired up a bike for a few days due to work & rain. BMW has been having starting difficulties for a while. Starter will only spin the motor about one revolution....even with a fully charged battery. Removed the starter last winter and cleaned / lubed and checked everything...thought it was OK, but the problem persists.
Purchased a used starter via EBay today, so I'll swap it out eventually and hopefully cure the problem. 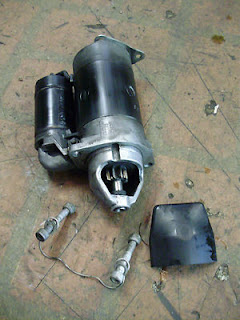 The bike will always start ("knock on wood") but sometimes under duress. It does have a manual kick starter but the high compression of the engine makes it a challenge....plus the 1974 BMW kick starters are pretty weak.
Probably won't get the starter installed in time for the weekend but I'm confident the bike will start.

Planning a ride for the Memorial Day Weekend. We'll be riding across some desolate, but beautiful Crow Indian Reservation lands along the base of the Pryor Mountains, then over to the Big Horn Canyon and Yellowtail Dam. The area is an old "stomping ground" of mine as two of my best friends lived at Ft. Smith and another at St. Xavier MT. Used to spend a lot of time getting into trouble around those parts.
Should be some fantastic photo ops this time of year since Montana is quickly turning green from the recent rains. Not sure if we're going to camp, we'll see what the weather forecast brings.
Posted by BMW HACKER at 5:55 PM 3 comments:

Today the gloomy drizzly weather finally left us with blue skies. Although I had a "date" with my 97+ year old Dad for a Cribbage game I thought I'd get a little ride in. Headed down MT. 212 towards Hardin Mt. At one time this was the major road to Billings before the birth on the Interstate. I remember dozens of trips along this road as a kid. Winter travel was always treacherous, then add all the semi / truck traffic and it was an interesting road. One year, I think 1971, there was over 20 fatalities along a mere 25 miles into Big Horn County.
(click on photos to enlarge)

Still pretty "drab" but the ground is trying to "green up". Not much moisture this Spring. Going to be a bad fire season if the rain doesn't come. I only had a couple hours for a ride but two hours gives me a 100+ mile plus range on the Gold Wing.


Drove quickly through Hardin. Stopped for a "photo op" at the home of my youth. ..0 yrs. - 4 yrs.
Pretty sad looking home these days. It seemed quite large as a child.
On the porch. 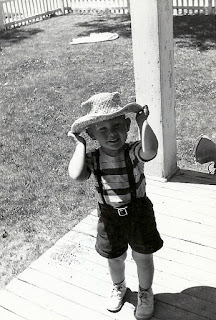 We had trees and a nice white picket fence. (yours truly on the right, circa 1958)
There was a group of old Army Barracks in the field in the back of this photo. Years later Dad bought the buildings / property. I pulled hundreds of nails as we saved all the lumber when the buildings were taken apart. He used the lumber to build garages and other projects. 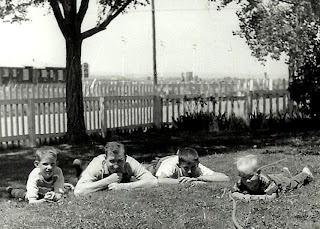 The bare field in the foreground used to be the Cities Swimming Pool. My older Brother knew the Life Guard and he would let us come in and swim after closing. I fell into the pool at about 4 years of age. Damn near drowned, but my oldest Brother pulled me out in the nick of time. I can remember having no fear as I sunk to the 9' deep bottom. The fear came after coming out of the water. I can still hear my own screams.
On top of the pool building there was a small tower. I remember looking at old folders full of outlines of WW2 era airplanes. I think it was a "Civil Defense" Observers Station during the war.


On the "Rims" above Billings. No leaves on the trees yet.


Made it to Dad's place a few minutes late. He managed to beat me at Cribbage the best out of three games. My turn to win next bout,(?)