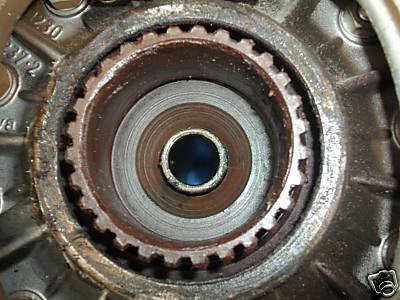 After 10K side car miles I've decided to regear the BMW /5 with some higher drive gears. When I swapped to the 900cc top end I changed out to a 32:9 Final Drive. I'm finding that the engine is running rather hot when trying to run at Interstate speeds. I sold off my old 32:10 final drive as the splines were about 40% worn. I found a very good looking replacement 32:10 final drive via EBay. I think that the 900cc power band will work with the 32:10 gearing. With the 750cc displacement the power output wasn't good under load with the higher gearing. Running the 32:10 will lower the engine RPM at interstate speeds and hopefully get the oil temp down to a lower level. At 65 MPH the engine was at 4000RPM and the oil temperature was hitting 120 Celsius, which is about the max. temp. it should run. Ideally a 37:11 drive would work. It is the ratio between the 32:9 and the 32:10. Unfortunately the 37:11 is a tough one to find. The few I've found are either worn out or at a very high price.
I could install an after market /5 oil cooler but clearance issues come up since the oil cooler assembly attaches at the oil filter cover where the side car attachments come in. I don't think a cooler will fit as things are somewhat crowded in that area. I've already installed a 4 quart oil pan to increase oil / cooling area. 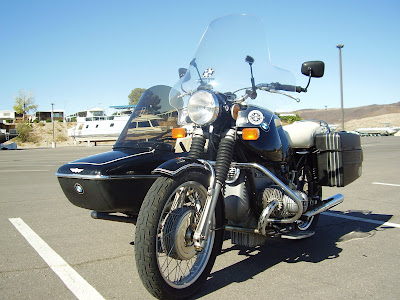 The downside to the increased oil pan size is the clearance.....I've whacked it on a rock while on a crappy goat-trail road and also scraped on a speed bump in a parking lot. The bike was way loaded up with gear and passenger when that happened. 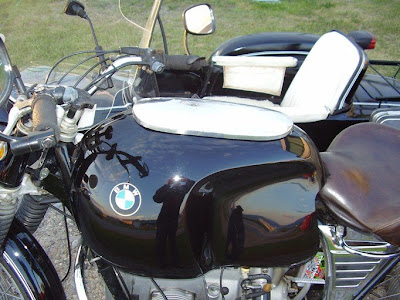 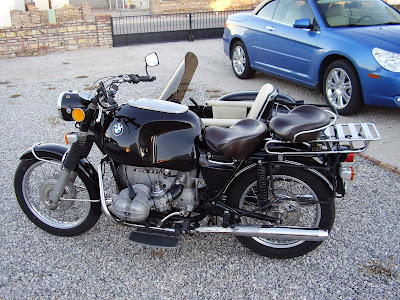 I'm tempted to replace the after market mufflers with some stock mufflers I have on hand. The ones pictured are a style I prefer as they are a lower sitting / longer muffler and get the exhaust noise down and away better than the Dunstall mufflers I have. The problem is that their baffling is minimal and they are just too loud. That gets annoying after 6-8 hours on the road! I may try to figure a way to baffle the pipes more cause I do like the look of them. I would really like to install a 2-1 exhaust header but every one I've seen is a right side mount. I'd have to have a left side mount to get away from the sidecar mountings. 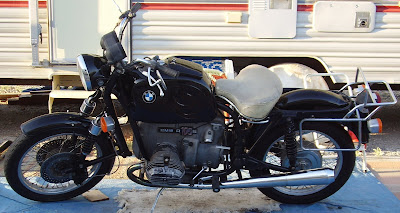 The R100S / R90 hack tug project is sitting for a while. The weather here in Texas has been pretty volatile the last few weeks with storms, wind, and rain. Not really into working on the project right now. I went to install the new knee pads on the black cop tank on the bike and found that the body man who repainted the tank has the pad indent on one side a little deformed. The new knee pads don't fit right on one side. Looks good until you hold the knee pad up. I'll have to do a little trimming to make things fit right. The Tug Project has a long way to go. Still have engine top end work to perform and wiring to complete. The "QSL 1000 Mile Tuetonic Solo Seat" will also need recovering. Maybe I'll have it going next winter......

DO YOU HAVE THE CONTACT INFORMATION FOR H-G FUEL TANKS? I HAVE A RATHER LARGE HEINRICH TANK ON MY 1969 BMW R60 THAT IS MISSING THE COVER THAT COVERS THE FUEL FILLER AND TOOL SUPPLY ROLL.
I AM TRYING TO LOCATE A REPLACEMENT OR SOMEONE THAT CAN FARICATE ONE.

I believe the business has closed. None of their contact info. is valid.

Thanks, for such a great post. I have tried and found it really helpful. For more details to visit Biker Knee Guards Online.