Work is finally completed for the season. Will be heading South this coming week. Looks like we'll have good weather for the trip for a change. Typically we are racing snow storms heading South.
Have a large list of repairs to do this Winter.
Finally found a vintage aftermarket "Derale" oil cooler which hopefully will fit the sidecar rig.
Cooler was listed for $80.00 + shipping on EBay....no takers and it continually dropped in price until it was offered for $30.00 Total, shipping included. Couldn't pass that deal up.
UPDATE: After some research I found  some facts concerning this particular cooler set up. The design led to some failed engines and were known "in the day" to be a piece of crap. Tom Cutter stated that many people who installed this cooler soon became "pedestrians"....lol...$30.00 "down the drain" I guess. Won't be installing it.
I'm glad I reached out for others experiences prior to using this. 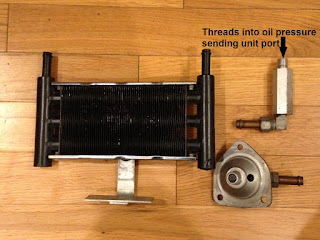 Been running the side hack with only the "Brielle" oil pan cooler. It's cooling effectiveness is marginal at best. Plus it has developed leaks around the gaskets. I'll renew both gaskets this winter while I have the bike pulled apart. 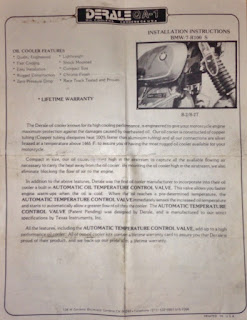 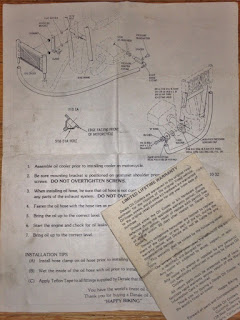 Still "on the fence" as to whether I'll install the newly rebuilt 5 speed or the newly rebuilt 4 speed on the sidecar. The 4 speed is a bit more robust, but I do like the 5 speed for the extra gear range. Bob C. at "Bob's Motorwerks" rebuilt both transmissions and found serious issues with the 4 speed. It now has all new bushings, bearings and springs, plus other parts. It had evidence of getting pretty hot at some point due to a poorly adjusted shift fork. Bob was confident of it's rebuilt condition though.
I'll have the rig torn "down to the bones" for a week or more. Hoping to do some long range rides next season so will address any issues / upgrades I can think of.
Due for a couple of tires on the side car and the Gold Wing....my Wife hates the word "tire"....as it always seems to be a topic with me.....lol

The old Gold Wing has developed an issue....either starter or solenoid. I know the 8+ year old battery is shot so will replace that first.

The Slash 5 will get a "newer" pair of later model carbs which I obtained. I will need to tear them down for a rebuild likely, although they appear to be ready to go. I'll go through them anyway....one of them has a different float bowl on it with dual independent floats.
Posted by BMW HACKER at 10:36 AM 2 comments: