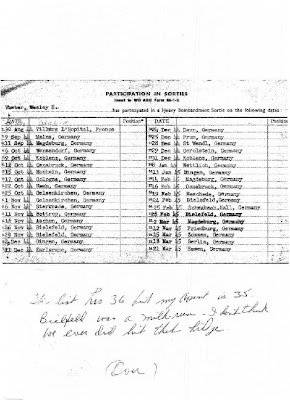 466th Bomb Group Crew #555 missions List. I find different information listing them in both the 784th and 785th squadrons. I remember seeing my Dads' uniform as a child and he wore the 785th shoulder patch.

This is the list of my Dads' (36) Combat missions, (he flew one additional mission as a Navigator was needed. His first and 2nd. to last missions were to Berlin) provided by the co-pilot, Wesley Vawter.
After completing these combat missions he volunteered with the ATC (Air Transport Command) and flew a number of clandestine missions into Sweden. Described here....

(This is taken from a site concerning Col. Balchens' military service)
"Whereas Bernt Balchen, between November 1944 and April 1945, commanded a clandestine air transport operation that, again in defiance of severe enemy opposition, transported from England to Sweden 200 tons of arctic equipment and operational supplies that were used to make clandestine overland transport from Sweden to Norway possible;" From Nov. 44 through April 45.

Dad flew in the later part of the transport with a partial crew (#553) piloted by Melvin Westbrook, co-piloted by Bill Pond. Not sure of the names of the other two crewman, but think they are from Westbrooks crew. (pictured below)
Bill pond is on the right...Westbrook is on his right. Photo taken by my Father in Stockholm in April 1945. They flew as civilians.
I don't think any of the crews involved in this operation received any sort of recognition. My Dad knew very little of the details about the operation. He did not even know who Col. Bernt Balchens was until I researched the details of the operation recently. I don't think any of these guys ever sought any type of recognition anyway. They were just happy to get home alive and get on with their lives. 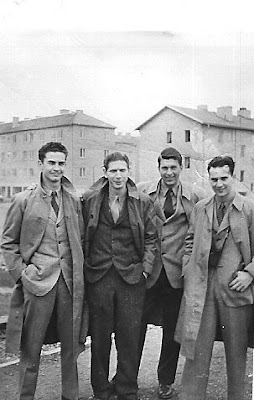 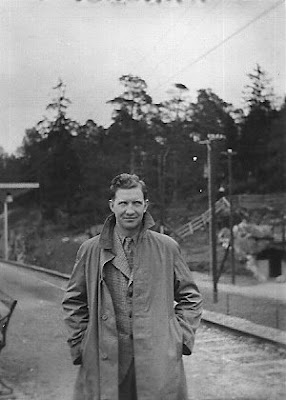 This is my Dad, taken at the same time in Stockholm. They were laid over due to weather. Had to avoid German radar equipped night fighters more than once. They had no guns or gunners so had to fly at wave top level. Came in to Sweden from the North sea. Dad Navigated , they flew only at night and were always solo flights. He said those missions were a bit hairy due to German Night Fighters, weather, wind and the crews total reliance on his navigation skills. 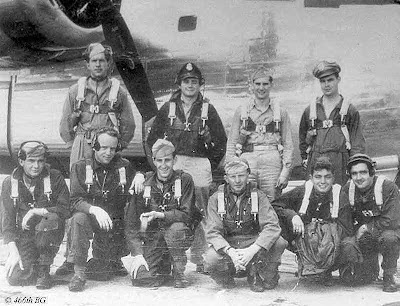 This is the "Mel Westbrook' crew (Crew #553) during combat tours. Westbrook is on upper left, Bill Pond is
Third from left, standing. 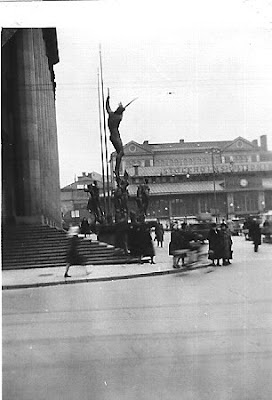 Photo of the main Stockholm train station. They used it to get around while "sightseeing" there. The War was still going but Sweden was a neutral country. That is why they flew as civilians in the unmarked, unarmed B-24's. Dad said they were painted all black for less visibility at night.

This car must have caught my Dads' attention while in Stockholm. It appears to have a coal / alternate fuel burning apparatus mounted in the front due to the shortage of gasoline...... 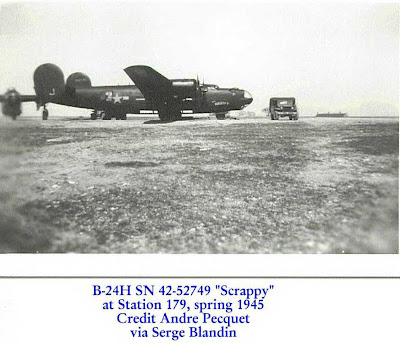 This is a photo of a black painted B-24. Possibly like the converted planes they flew into Sweden. Dad said their planes had no military markings on them though.


During the advance of the forces in Europe the B-24 crews had to haul gasoline into France, the "Gas Truckin" missions. The crews did not get credit for these flights as they were not combat missions. There were as dangerous (if not more dangerous) than the combat missions. "Jamaica" was shot down during one of those missions. Dad said he saw more than one of the planes crash on take off due to the over loading of the fuel containers they carried, The crews had no chance to get out on take off and always burned up with the plane. Pretty scary stuff. D.S.
Posted by BMW HACKER at 10:29 AM 2 comments: 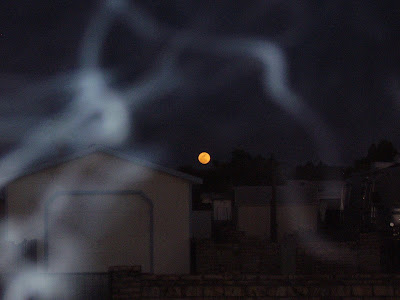 Took a few moonrise photos on a clear night in Yuma and this one had some odd apparition going on......didn't think my front yard is haunted.......didn't appear in any of the other photos.
Well, been a while since a post....we've traveled thousands of miles in the past 4 weeks. Currently in Fritch Texas which is in the panhandle. Had tremendous storms last Thursday night accompanied by tornado warnings. Nothing happened here except for torrential rain most of the night. So far we are enjoying Texas. Very nice people and pretty although mostly flat country. We are working at a marina on a lake so have some scenery to look at each day. I'll get some photos up one of these days.
Got an email from another son of a 466Th Bomb Group member. His Dad flew in a few of the same planes my Dad flew on. They were stationed in England at the same time and same place. He has some photos to share and I'll do the same. Talked with Dad today but the fellow airman's name didn't ring a bell. It has been a lot of years ago....The crewman's name was Alexander Boris. I did some research tonight but didn't find out too much. One of the planes he flew on was lost with all on board KIA in Sept. 1944 on the gas hauling missions. Dad flew a number of these gas trucking missions also. I found the MACR (Missing Air Crew Report) one of the planes that airman Boris had flown on. The MACR's describe the circumstances surrounding the loss of the plane and the men lost or captured. Unfortunately he never shared much of his service history with his son so there are mysteries to unravel.

No motorcycle stuff going on for a while and the current side car project is kind of on hold right now. I'll get into things later this spring. Work is taking up most of my time at this point.
All is well in the Smith world........Later......