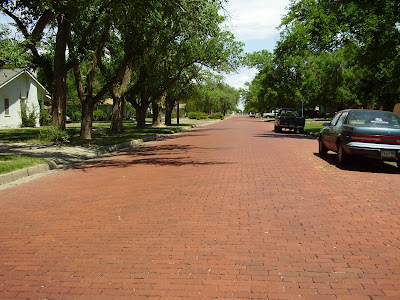 Leaving the canyon area we rode over to Canyon Texas. We wandered around the town a little bit and found that some of the old streets were brick paved. We saw this in a few towns during this trip. Texans are proud of their history....we saw "Historical Markers" every few miles. If we stopped to read them all we'd still be a few hundred miles back. 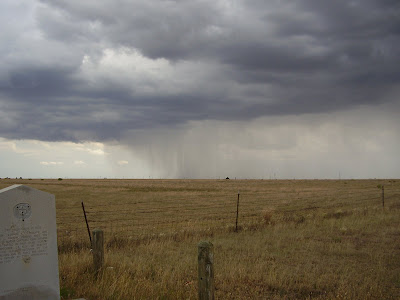 We came to Tulia Texas, south of Amarillo and rode into quite a thunderstorm. It hit so fast we didn't get time to get our rain gear on. I stopped for a second but we decided to keep going. The rain started falling even harder so I stopped a second time. Our new light Micro Fiber jackets are great in the wind and cold but rain.....I watched as the rain hit Darian and the water just vanished as it hit her. Kind of like the "Sham-Wow!" commercial. Very absorbant! I'll keep the rain gear closer next time. One thing about riding with wind screens is that the rain tends to just fly over us. It takes a very serious rain to actually get wet. 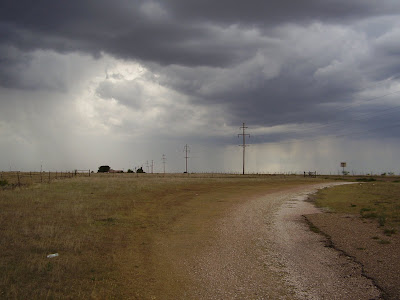 We raced ahead of the storm and stopped at a "historical marker" to take some photos. We just came through the edge of that wall of water. 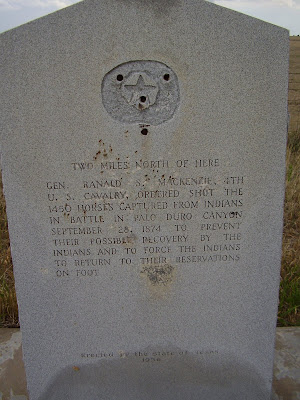 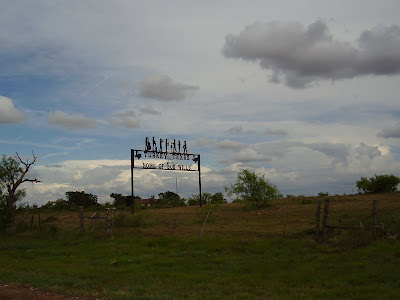 One town we passed through was the world renowned town of Turkey Texas....Home of "Bob Wills". (whoever he was...a musician I think) We were then Memphis bound. 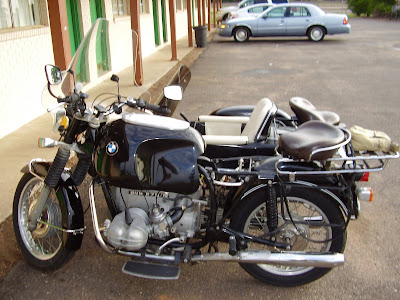 Memphis looked like a big town on my map....got there and it was around 2300 souls..........one Motel and a closed Hotel. We decided that the Cactus Motel (Which Advertised in big letters "AMERICAN OWNED") would have to do for the night. $39.99 + tax. The old Black Hag BMW is having a little charging sickness which I haven't figured out. Pulled the seat / battery and charged the battery all night in the motel room. I had the fore site to bring my 1 amp trickle charger luckily. I ran part of the day without running the headlight to conserve juice. 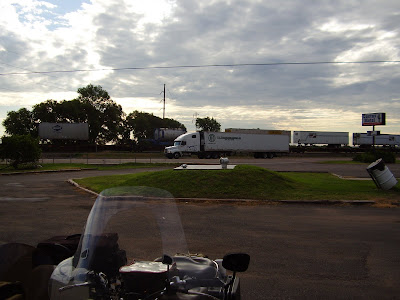 The beautiful view from our room. I was able to catch a live shot of what we heard all night....Semi Trucks and Trains. The Train drivers blast their horns a minimum of three times as they approach the crossings. Of course there was a crossing very close to us. I spent a summer working along side the train tracks building new track beds. We had a minimum of 90 coal trains per day. I never got used to the train drivers blasting the horns each time . Let's see.......90 trains a day......minimum 3 blasts per pass........270 blasts minimum. I always said
I would like to find where one of those guys lived and sit outside a blast a horn a few hundred times.......naw...their just doing their job.