Came up with an old set of Bates Saddle Bags for $75.00 the other day....I was looking for a set of Wixom Bags but these are larger and a lot heavier built...they came with mounting brackets but might need some modifications before fitting the /5 or /6 frame.....They were locked and came with no key but one key I had fit them perfectly..... 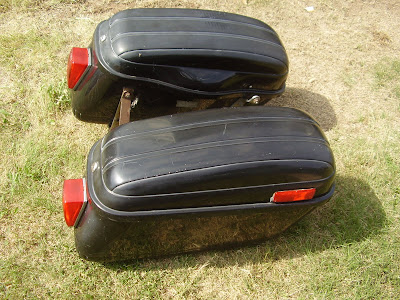 The R100S engine went together last week after a couple of hours work.....was able to fit each ring to the cylinder right within spec. as they were oversize .025mm...had to file each ring separately to for fitment. 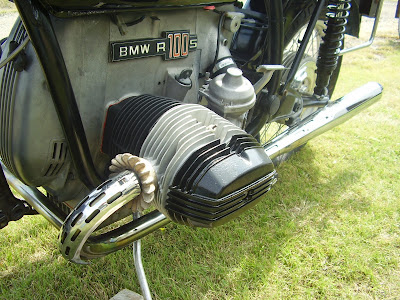 heat painted the lower cylinder jugs...I wanted the machine shop to media blast all the old black paint off but they did not.....so repainted. 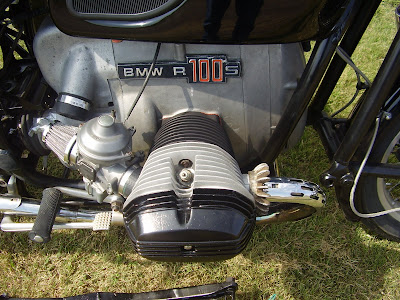 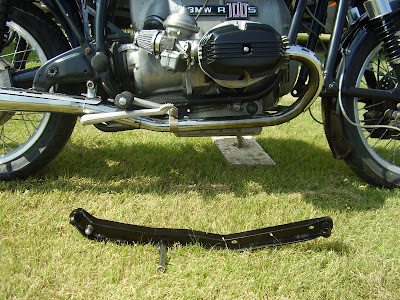 The lower sidecar mounting sub frame. The sub frame has a foot peg welded as it requires removal of the existing foot peg. 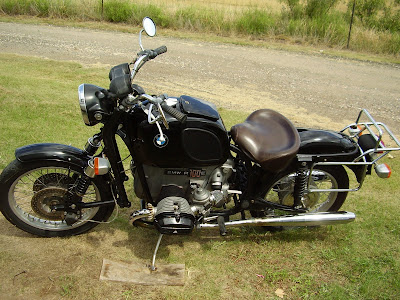 Looks like a motorcycle again but there is still a lot of work to be done......
Posted by BMW HACKER at 5:37 PM No comments:

Finally have all the R100S Engine parts coming to me....My buddy Bert told me I was crazy if I didn't pull the rod bearings and check them when I had the engine top end pulled off....he was right as when I removed the bearings they did show evidence of wear. No bad scoring but showed wear non the less. The crankshaft journals look just fine. So I ordered a new set of std. rod bearings along with new rod bolts....BMW rod bolts are a one time use item and must be renewed each time. Only $3.30 each & BMW rod bearings were $14.20 each. Ordered the over size rings which I hope are correct......Should have all parts in hand in a few days so will begin reassembly of the engine. 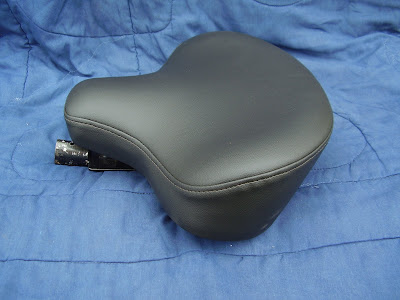 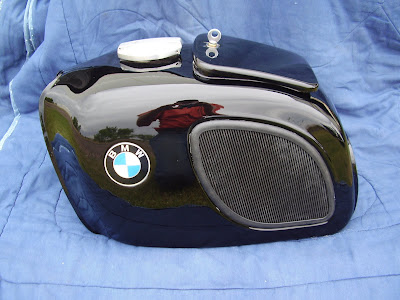 I gave this German Police tank a dry run on the "Hag" for a few trips and it works fine.....It was traded for my old Toaster Tank and I had a $75.00 Mexico paint job done.....new BMW "Roundels", new tank pads and a restored aluminum fuel cap. This will go on the R100S.... 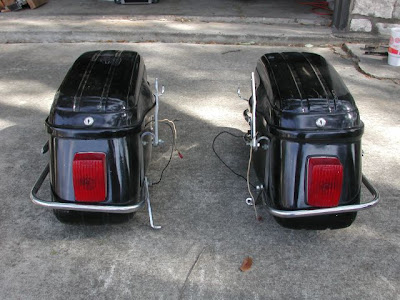 I've been wanting some older style saddle bags for the BMW /5 "Hag" when the sidecar goes over to the R100S. The R100S will get the BMW stock bags currently on the "Hag". Wanted to purchase a set of "Wixom" saddle bags but their costs have been pretty high....The ones I've been tracking on EBay have been well over $300.00 w/shipping. Decided to settle for a cheaper set of "Bates" saddle bags & mounts I found on the IBMWR classified site for a total of $90.00 and that included shipping...a pretty good deal! They have an older "retro" look and are actually better made with heavier material than the "Wixoms". The Bates bags are also larger and will likely hold the "Krauser" inner - liner luggage I use. Most of the Wixom Bags crack at the mounting pin areas... 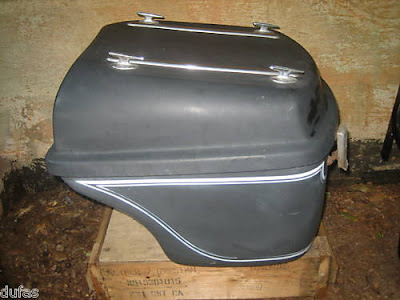 Wasn't sure I wanted this "Wixom Ranger" Top Case but I won it on EBay for a total of $10.19 plus $38.00 shipping. Can't believe that I was the only bidder........Not sure which bike it will go on but the price was definitely right!

Also bought a set of "Luftmiester" Header Guards and Muffler guards for a total of $45.00 plus shipping.....I've seen the header guards go for over $100.00 alone....so all in all I came up with some pretty good bargains lately....all financed by selling misc. BMW parts on EBay.....The R100S bike's cost is coming up with all the parts I've been accumulating...I figure I'm into the bike around $1500.00 now. Not too bad.....Still need to replace the tires at some point too......

I have the R75/5 Long Wheel Base sub frame repaired as it had a small crack...it will be sanded primed and painted.
Also had a BMW R75/5 Steering Friction Damper modified / lengthened ,to fit the Leading Link Front end. I'll need to do a few more minor modifications to the lower friction plates & mounting
tabs....
Posted by BMW HACKER at 10:11 PM No comments:

Finally a three day weekend and a little time for a sidehack trip! Spent part of last Sunday preparing the BMW. Reset all valves, reset points, changed oil, and replaced the 2 year old battery. The battery hasn't been taking a proper charge for quite some time and the plates looked funky. Nice to have a functioning, charged battery again!
Saturday morning dawned a wee bit foggy and overcast. We headed out around 9:30 AM and the fog burned off within the first 1 1/2 hours. We headed south on highway 207 through Panhandle Texas, crossing I-40 going south. Kind of an eerie looking morning with the fog...... 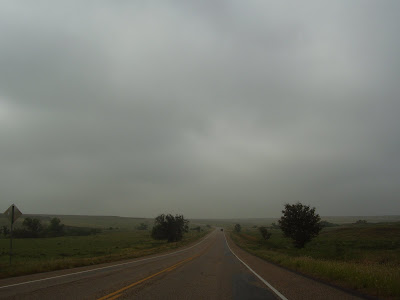 An old decrepit barn, ready to fold up.....in another hundred years or so..... 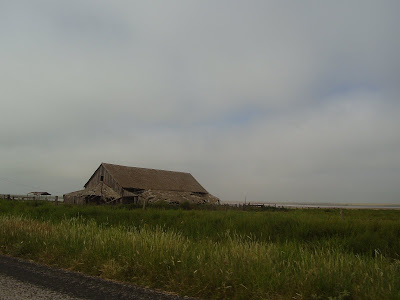 Texans' have a thing about burying cars...hence the "Cadillac Ranch", which is simply ten or so old Caddies with their noses buried.....here we have the "Bug Ranch", I guess.... On a previous trip we saw a row of old combines with their asses pointing skyward....... 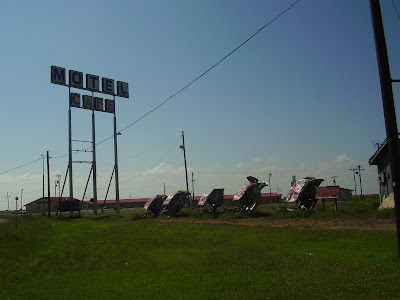 Heading south on 207 we passed through the eastern side of Palo Duro Canyon...very pretty area with a lot of red rock and dirt...... 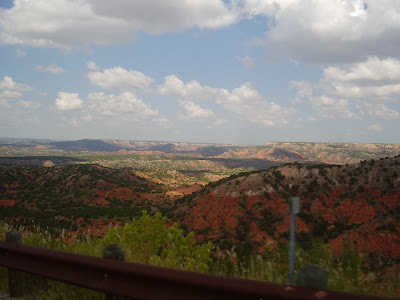 South of Palo Duro we turned east on highway 145 which took us towards New Mexico....It was over a hundred of mostly straight miles through cotton fields, corn fields and cows......
I thought I was lost for a while but then this sign straightened me out.....Earth...that a way! 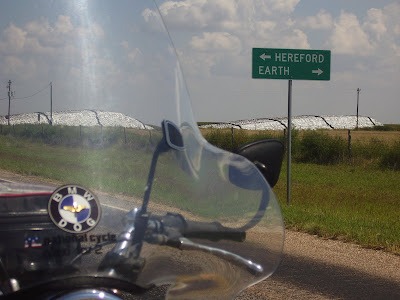 We had a motel reservation a few weeks in advance...luckily so as there was a big AKC Dog Show going on in town. Looked like everything but the roach motels were filled. The "Aliens" are ever present all over Roswell. 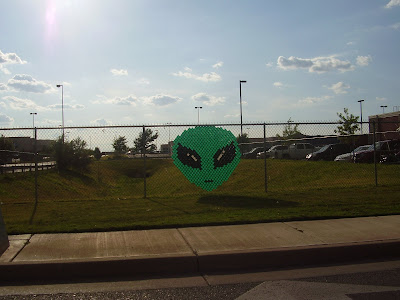 Sunday morning we headed out on a seldom traveled back road highway 246 which heads west out of Roswell towards the Capitan Mountains. This was a great route and we saw maybe 5 cars in 100 miles. Ran into a little rain squall by noon or so.....The mountains aren't too impressive when approaching, but actually they are quite a large range of mountains. 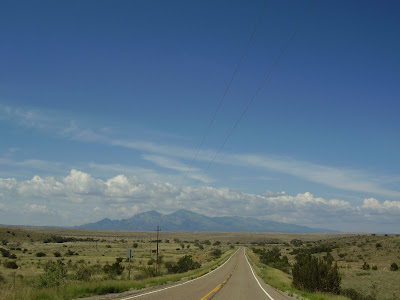 We crossed down towards Ruidoso N.M. and it was like riding into a Metropolitan area. Traffic was thick and people everywhere. Looks like the area is a huge tourist area. 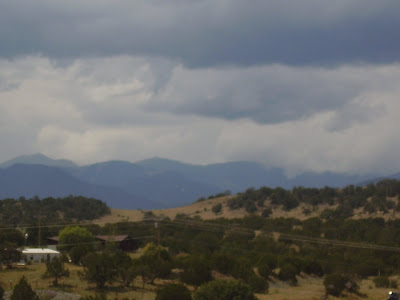 A lot of thunderstorms everywhere around us.....a beautiful area and it is built up with a lot of homes....... 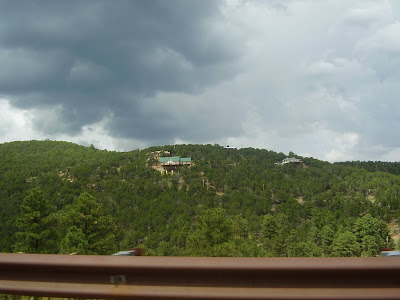 This hillside place was on stilts. 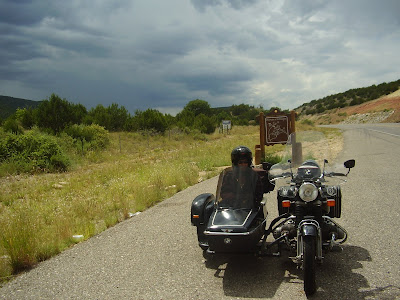 We ran over to Lincoln N.M. which is where "Billy the Kid" was jailed and waiting to be hanged when he escaped the jail and slipped out of town. Somewhat of a tourist trap type town, but it does have a lot of old 1800's buildings which have been preserved......Above, we are racing ahead of a pile of storms, headed back towards Roswell.....some of the storms were very heavy, but we only got caught in a few squalls......
"Ruidoso Downs" is on the map......ended up that there was a huge horse racing track and a massive Indian Casino.....It looked like a zoo and so many people were trying to get in that the Police were directing traffic in after a car accident occurred while someone was trying to turn in. 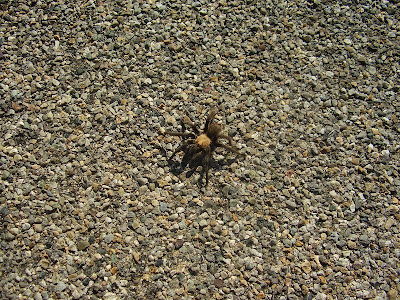 I'm always looking close for road debris while traveling so I always spot the tarantulas as they wander across the road. This was a fairly big fellow...saw one today that was quite a bit larger.... 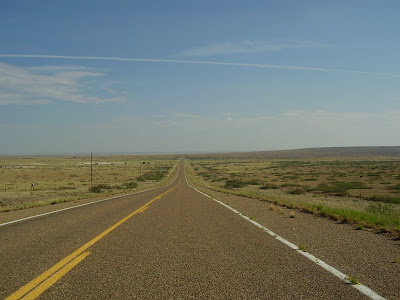 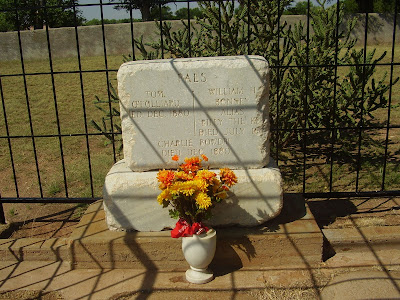 Stopped in Fort Sumner and went and checked out "Billy the Kids" final resting place....seems that people keep stealing his headstone...once it was found in Texas and another time it was found in California......they have it pretty well caged in now. We ran straight back to Fritch and arrived at 5:30PM. Just missed another huge system of storms heading home. Didn't get a drop of rain today, but must have killed hundreds of grasshoppers....I had bunches of them cooking on the engine cylinders when we got home.........
Posted by BMW HACKER at 6:31 PM 1 comment: