Decided to take a 200+ mile road trip on the Honda GL this afternoon. Quickly loaded up some warm gear and on the road by 1:00 pm. Decided to run up "Ogilby Road" in California and north up to Blythe CA. Then over to Quartzsite AZ. Basically a big 200+ mile loop.
The old ghost town of  "Obregon" along CA. Highway S-34...nothing there now, other than quite a few RV'ers dry camping in the desert. Appears to still be some small mining efforts going on. 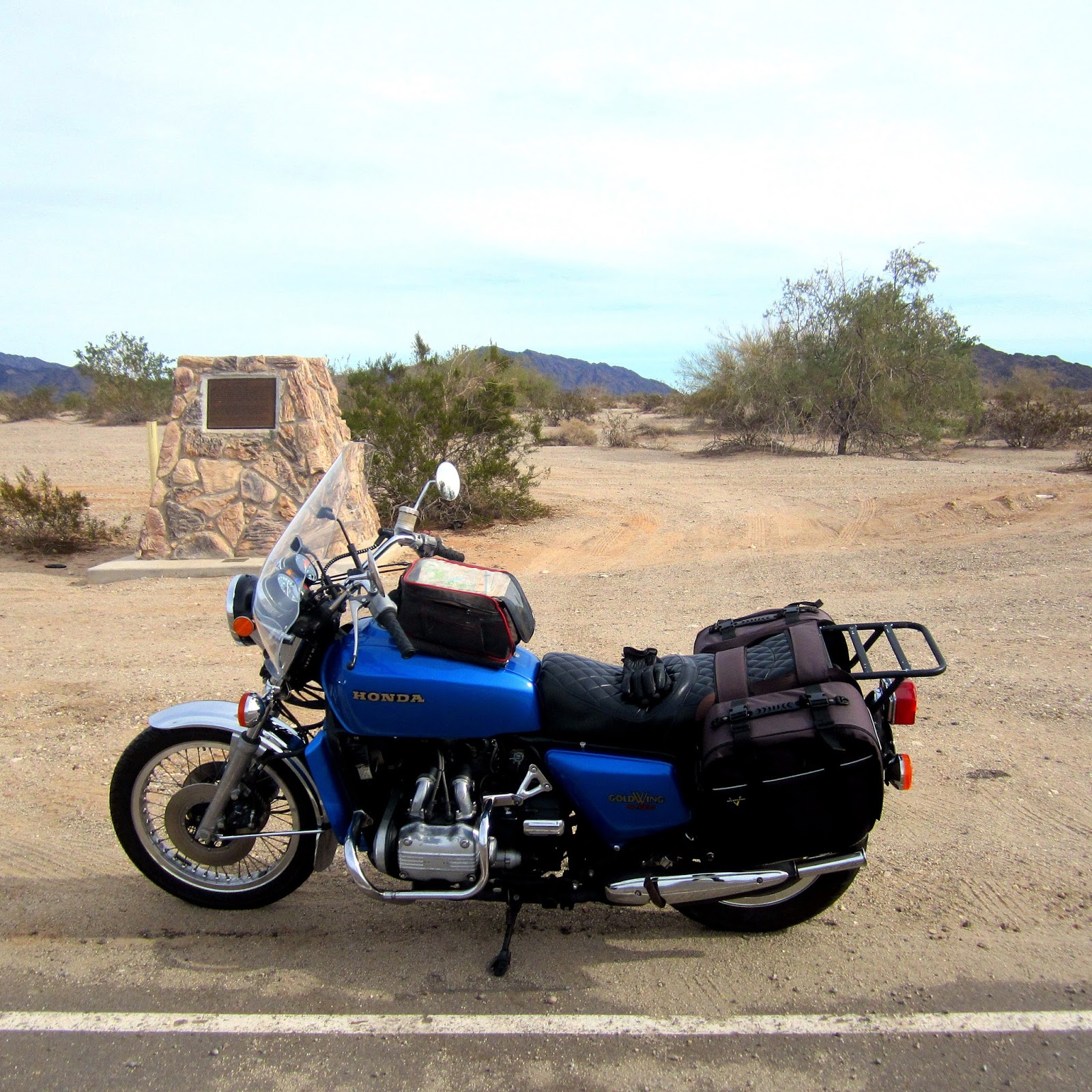 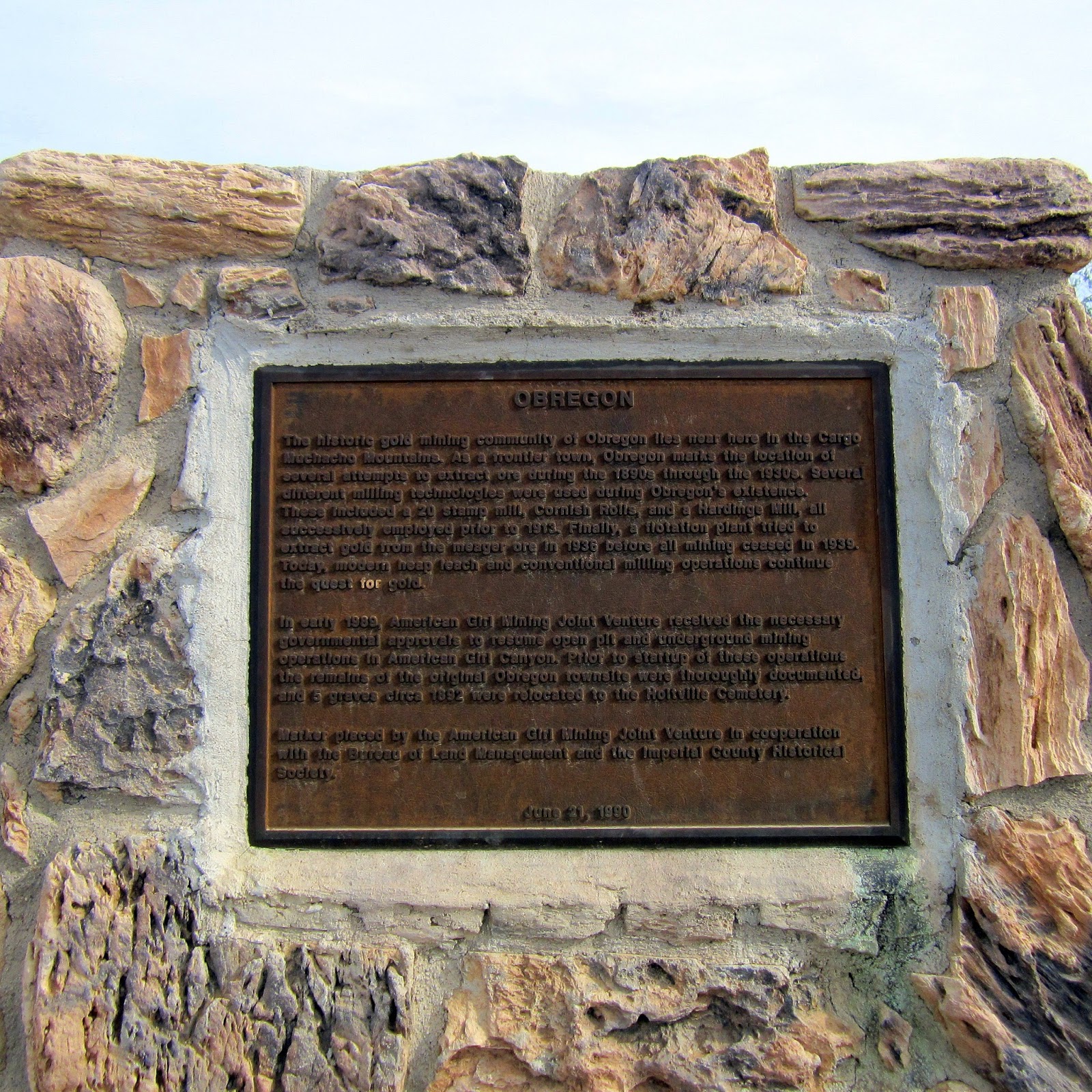 The Gold Wings new carburation  system worked fine throughout the ride, other than the occasional "lag" when starting out. Checking fuel mileage put it at 42 MPG, which is about what I got with the original 4 carb system. 40 miles of rock, brush & sand on CA. S-34. Numerous sections of the road are water crossings, when it rains the water carries loads of sand / rock onto the road. After every rain "event" of any size, the Cal-Trans guys have to plow the road. 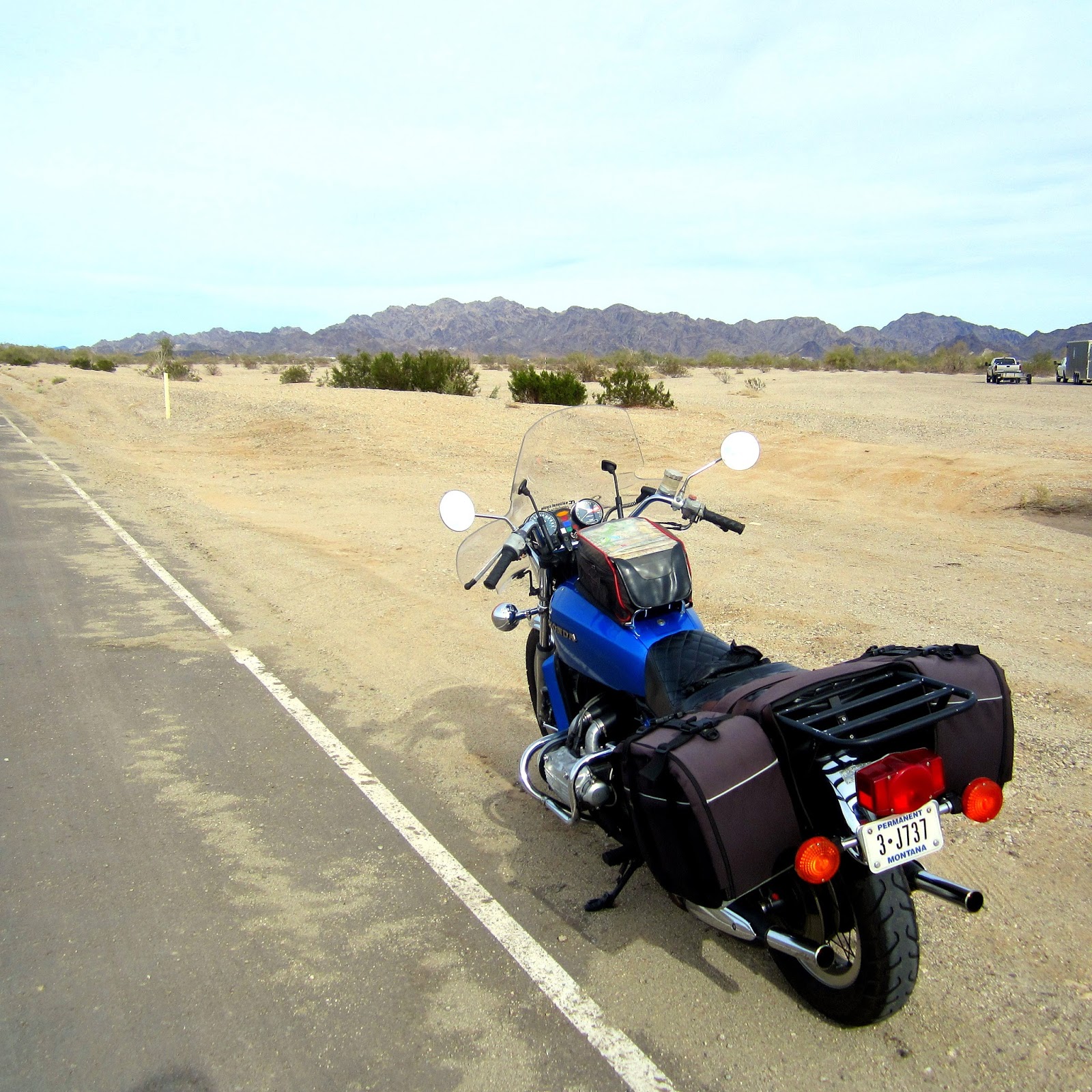 A nice section of hilly twisty roads were on my chosen route. The road then drops into the Colorado River Valley prior to hitting I-10. 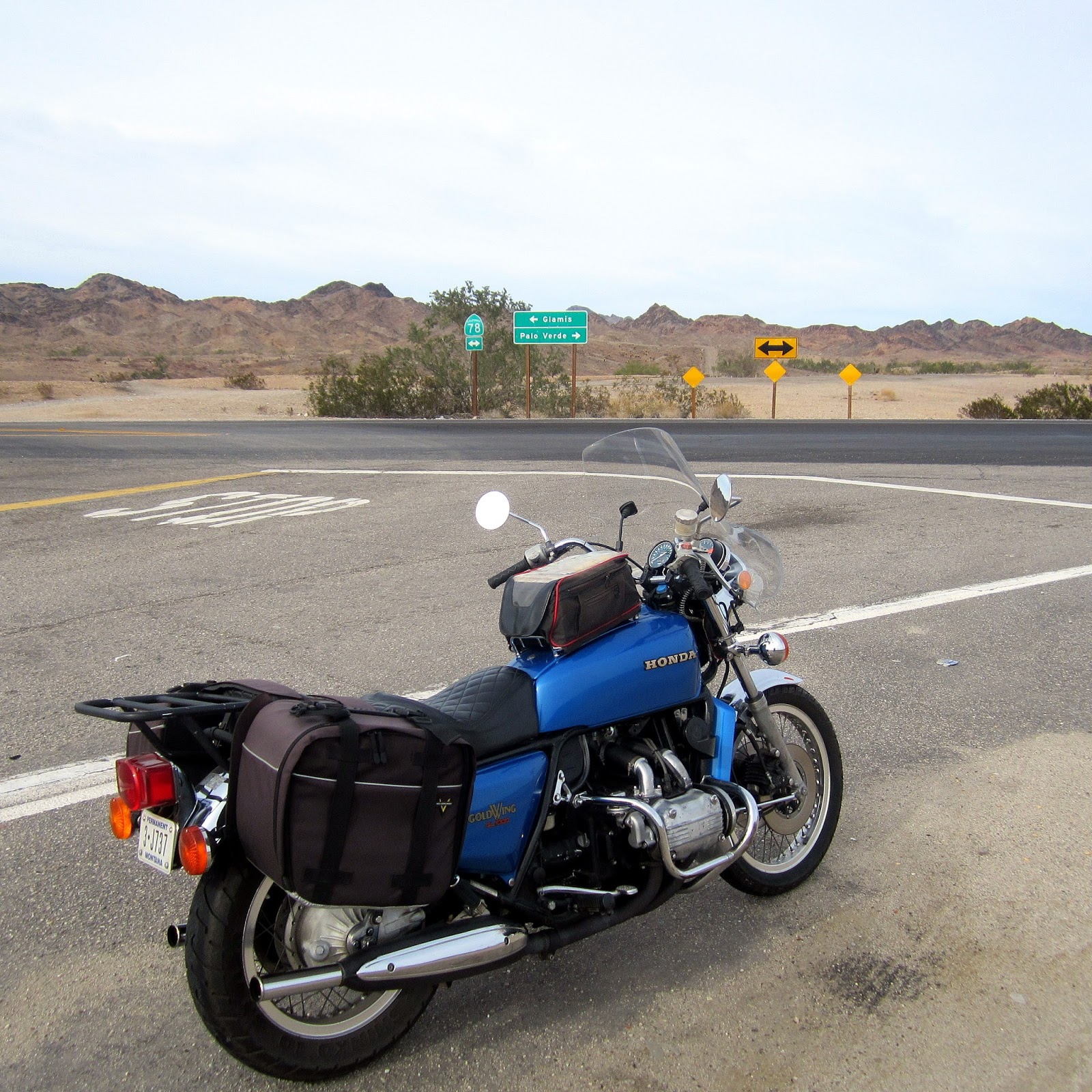 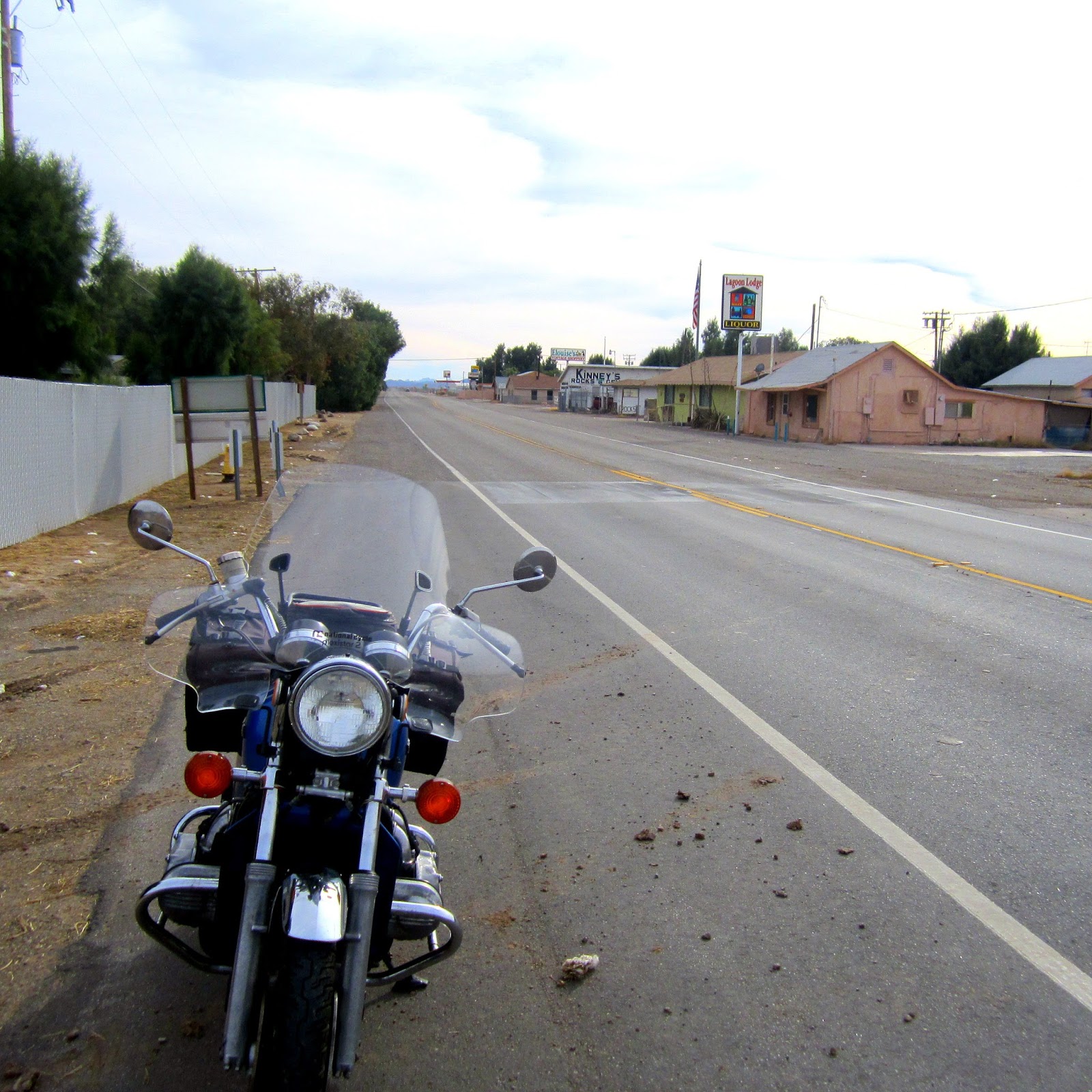 Fueled up in Blythe CA....checked mileage @ 42 MPG. Had a quick Macdonalds burger...then to Quartzsite AZ. Temperatures were cooling off as the day went on. In the lower 60's by 5:00 PM. Great riding weather. The bike ran great. I'll pull the spark plugs and take a peek at them tomorrow to see how they look.
The GL 1000 was really happy running at 75 - 80 mph on the highway. Engine temperature was in the low range as usual. This bike is more comfortable on the highway than any other bike I've ever owned.....other than the "stiff" rear Progressive Shocks..... CA. S-34 is a pretty rough road and a few of the bumps rattled my teeth.
Arrived home just prior to sunset.
Mountains outside Quartzsite: 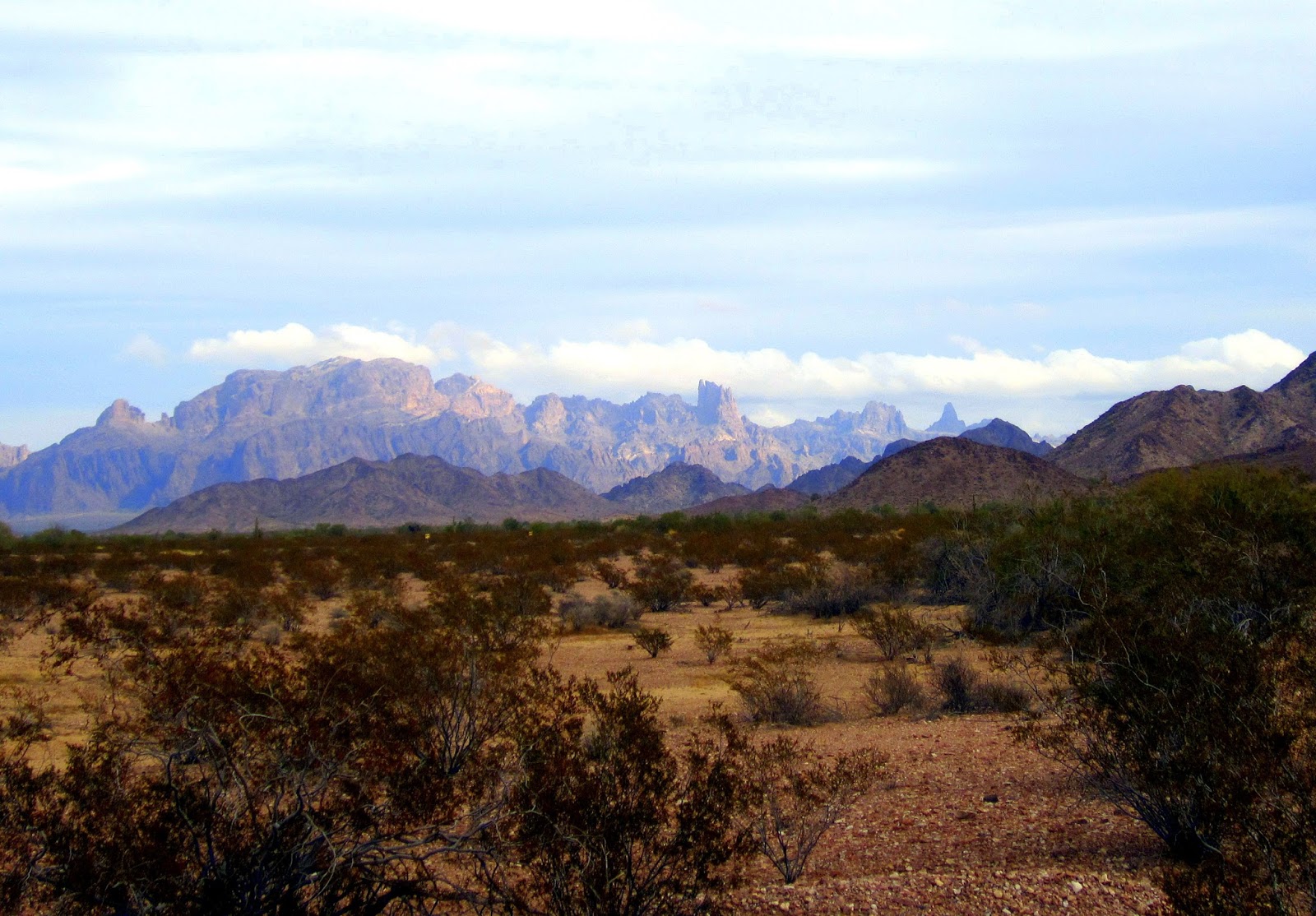 We rode the sidecar rig over to the Mexican Border yesterday. Guess I'll need to get the R75/5 out for a ride next so it doesn't feel neglected...
Posted by BMW HACKER at 12:18 AM No comments:

Got the bike out on the road for 150 miles today.
Cold starting the bike (@ 50* or so) took a few minutes of warm up time. Took about 3 tries to get the bike running, then had to hold throttle at 2k RPM for a full minute before idle could be achieved.
Once warmed up, things were fine and idle consistent at 1100 RPM. Re-starts were instantaneous with a touch of the switch. What really amazes me is the amount of acceleration when the Weber carb secondary  opened up. ....65 MPH to 100 MPH happens VERY quickly. Engine ran smooth and consistent at highway speeds with no issues. 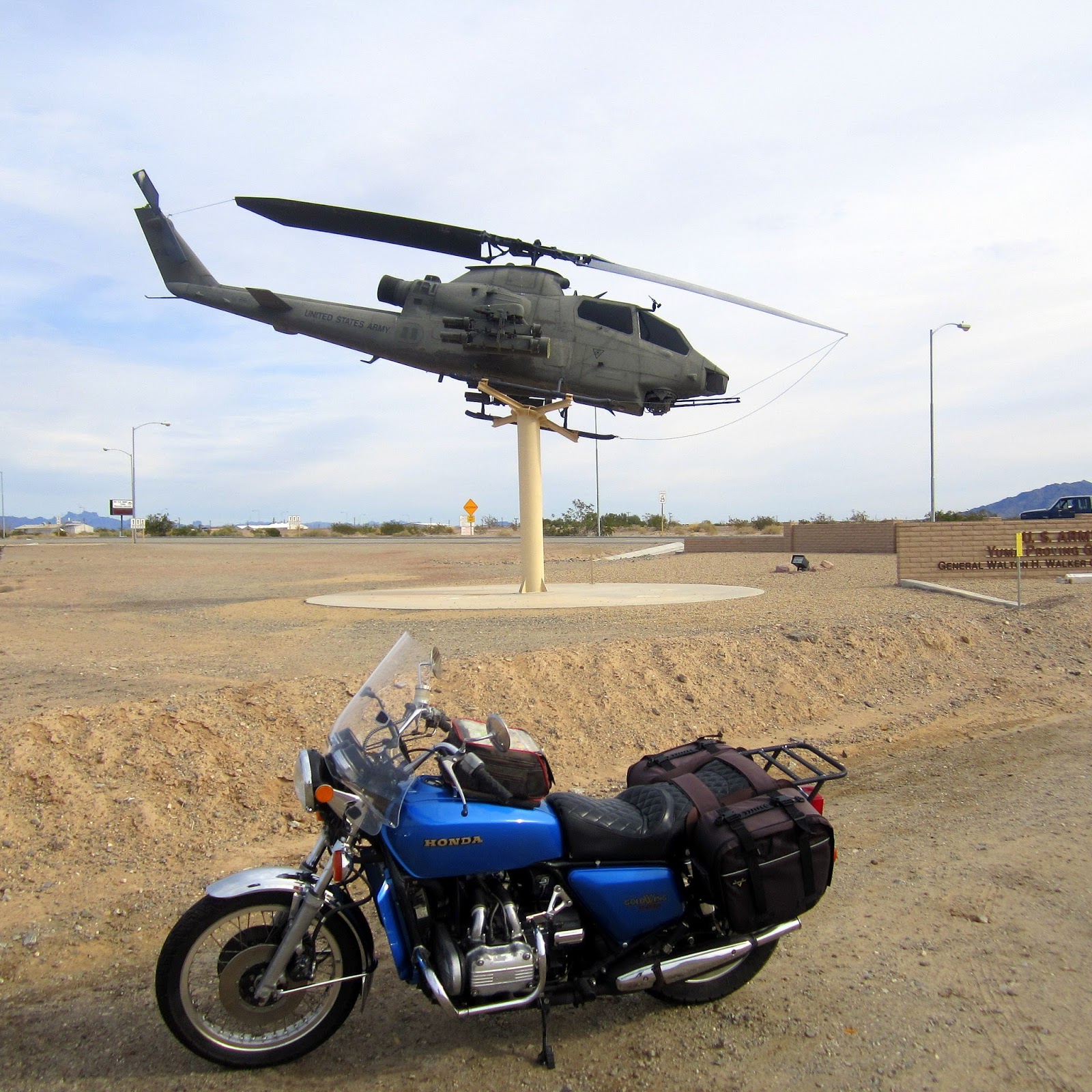 Took some secondary roads out to the Yuma Army Proving Grounds....then through the Dome Valley. Ran some freeway sections on I-8 at 75 - 85 mph. 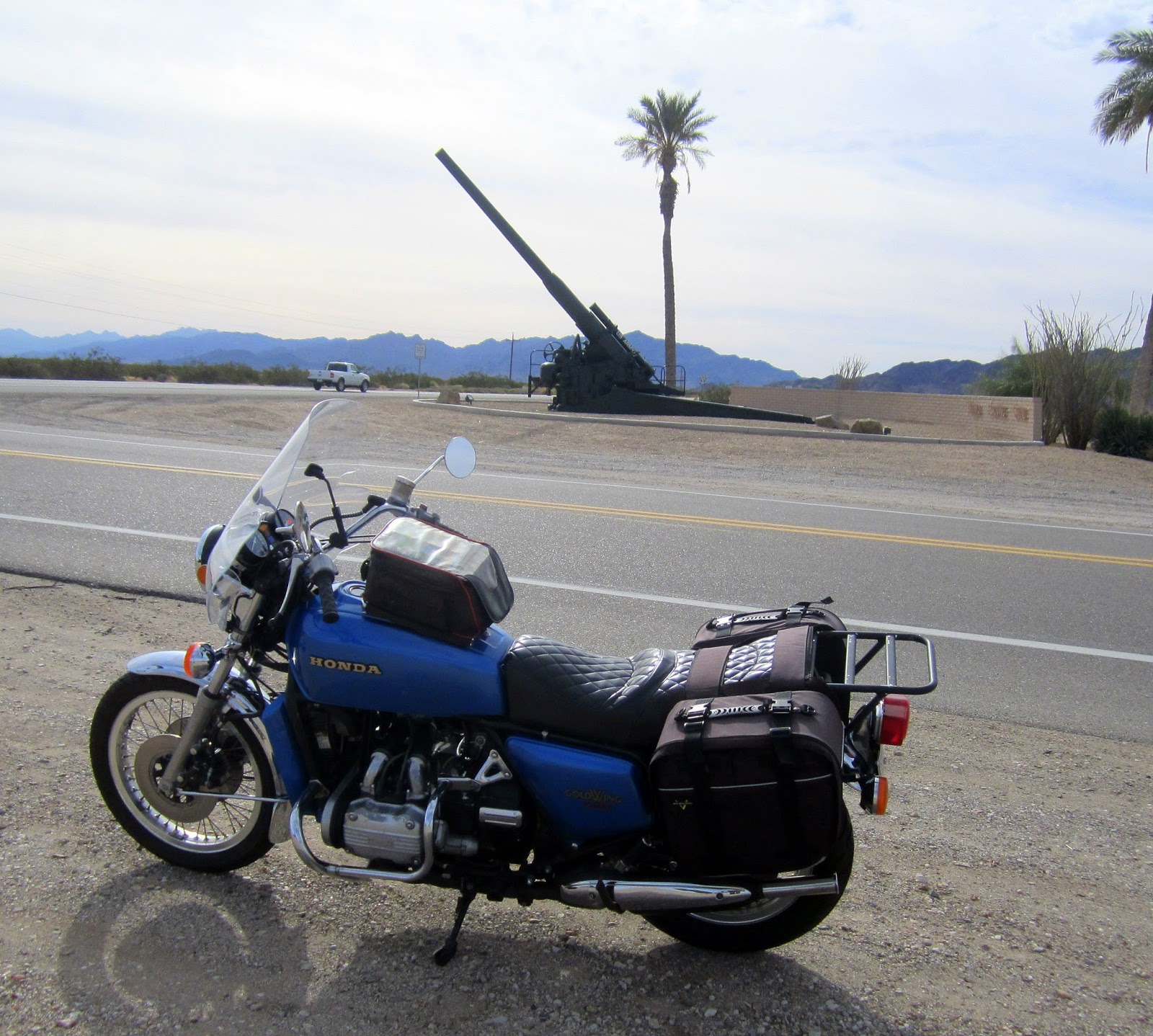 Occasionally experiences some throttle "lag" when starting out from a stop. I was pre-warned of this trait without the plenum preheating in place. Only experienced that at a few start outs from a standstill. When sitting stationary in neutral and hitting the throttle, zero lag is present....it only occurs when starting out, under load, when "lugging" the engine. 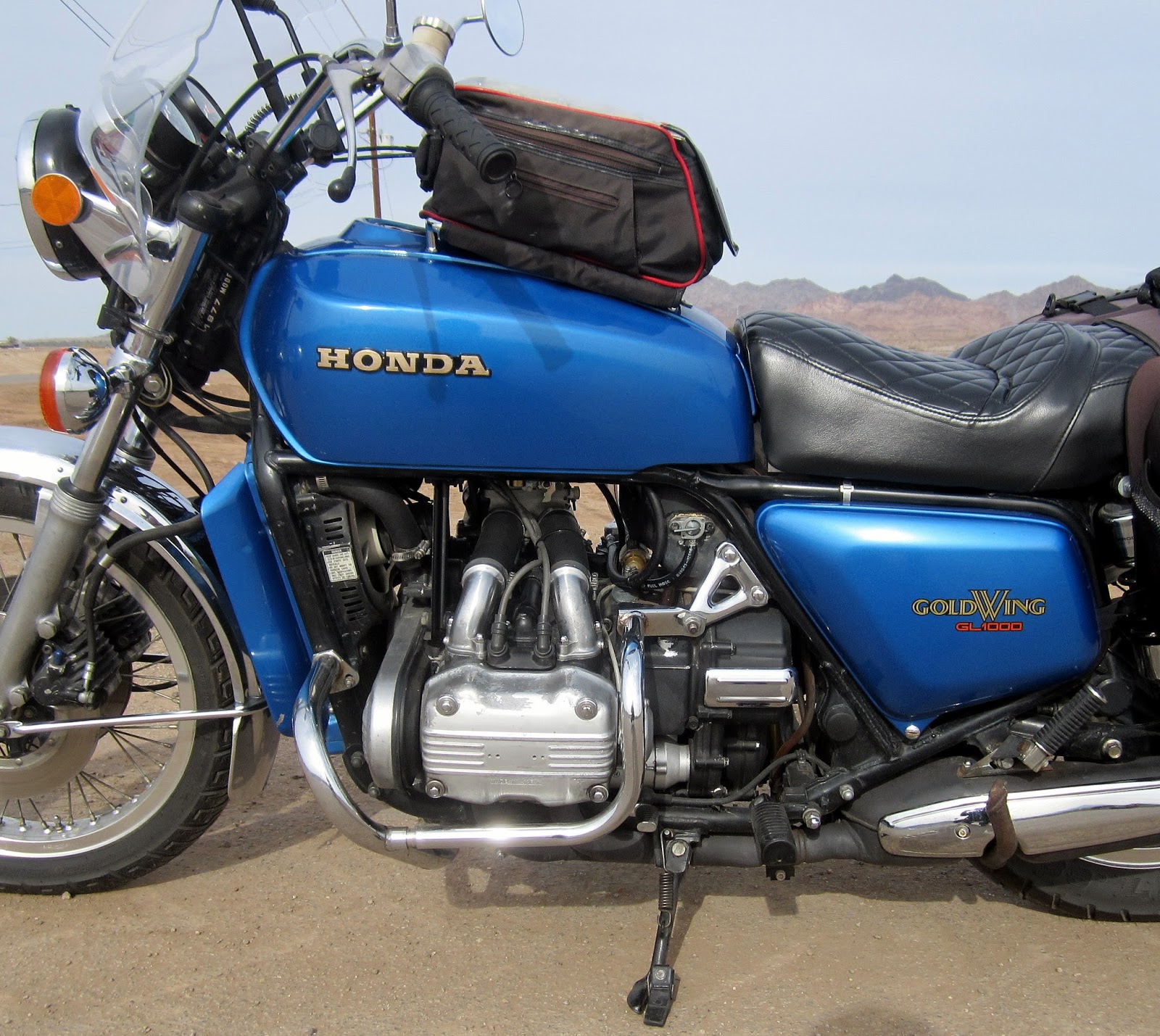 The final "product" looks like a "planned event" when it was complete. The spark plugs in the bike are probably 5 years old so I stopped at a local bike shop and picked up a new set of plugs to install.  I want to keep an eye on plug "burn" condition to make sure it's not running to lean and new plugs were due anyway. 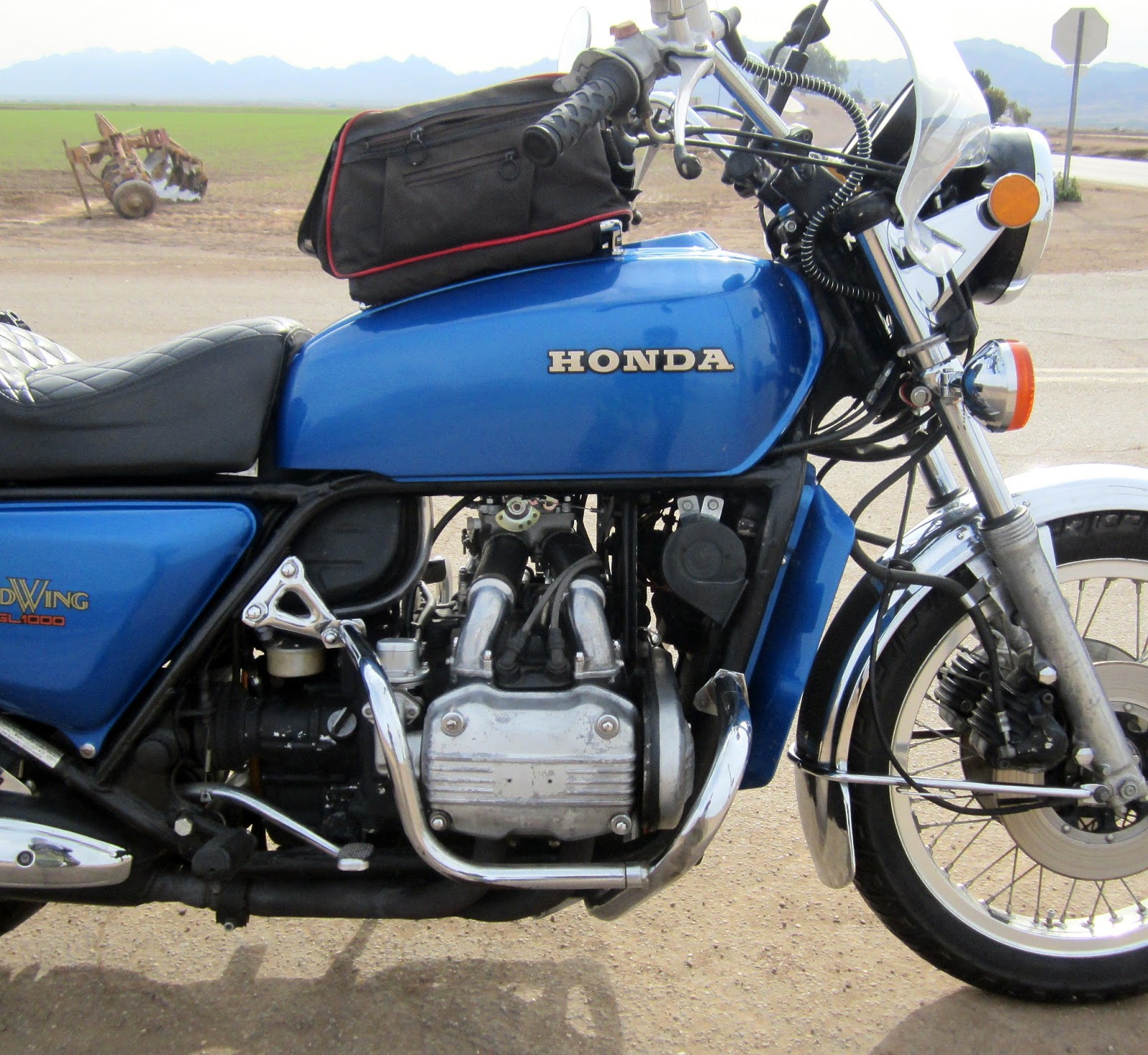 I monitored fuel usage for today's ride and was at 42 MPG for the highway riding, varying from 50 MPH to 80 MPH. That was exactly the same fuel mileage I was seeing prior to the conversion. The plenum heating will be next on the list to hopefully eliminate the occasional throttle "lag" I'm experiencing. Thinking about routing some exhaust heat via tubing up to the plenum. Not sure if that is a good idea but it would definitely be the simplest way. Still sorting out options:
1) Cooling System Heating
2) Electrical Heating
3) Exhaust System Heating
Saw where one aftermarket VW single barrel conversion used scavenged exhaust heat (EGR) for their preheating. Not sure how they achieved that but I'm going to think it through.

starting update:
I've "cold started" the bike a few times now and have a routine down to start it with one attempt. About 8 throttle twists, then hit the starter...... feathering the throttle for a few seconds will keep it running. Then lock the throttle at about 2k  RPM for 60 - 90 seconds, after that point the engine will idle.

Finished up some small details today to get the bike on the road again. Now the bike is "wearing" one Weber 32/32 carb. The Weber utilizes a progressive 2 barrel system, with the secondary barrel activated via a progressive linkage.
Completed the air filter installation and plumbed in the crankcase breather to the air filter.
Rode about 30 miles, 20 of which were on the freeway. Engine ran well and power was good.
Took a couple of minutes to warm up. Engine wanted to "stumble" a bit when cold when throttle was applied.
Power band isn't as "seamless" as the OEM 4 carb set up but acceleration seemed to be as good if not better.
I'll rack up some more miles in the next couple of weeks and keep an eye on the spark plug conditions.
As far as a final determination to the set up, we'll see how it performs over time. The idle is stable at 1000 - 1100 RPM.
I'm just happy to have the bike back on the road...for around $350.00 total cost.

The bike has been sitting since August and the front brake calipers were a bit "sticky". I removed the calipers, and with a large c-clamp in place, extended the pistons out past their normal travel distance, then use the c-clamp to re-set the piston. Performing this task a few times frees up the pistons. With the fluid sitting "static" for a long time, the fluid must create a "spot" on the cylinder bore walls.  This same scenario happened a year ago when the bike sat for a while. I'll eventually need to rebuild the calipers, and should probably change the brake fluid, although the visible fluid looks as new.
I also changed the oil / filter, I'd only ridden the bike a bit over a 1200 miles since the last oil / filter service about 12 months ago. The previous owner retro fitted the bike with a spin on filter adapter which really makes the filter change easy.
Right side view:
Throttle cable was too short to bring in from the rear, so I opted to bring it in from the front. Made a simple bracket for mounting. Had to drill a small hole through the "firewall" to route cable into place. Purchased a universal throttle kit to adapt to the cable.
("left click" on photos to enlarge) 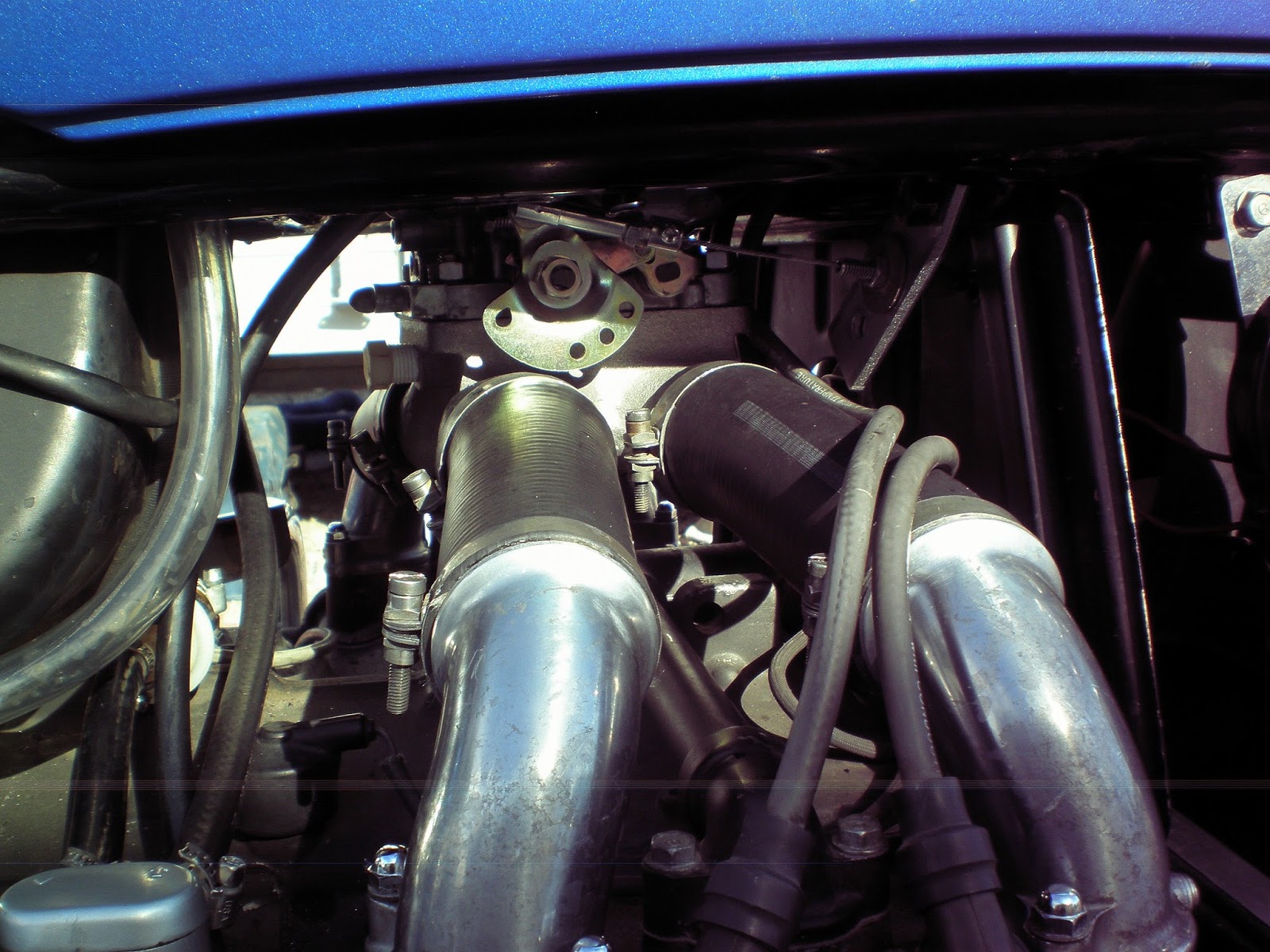 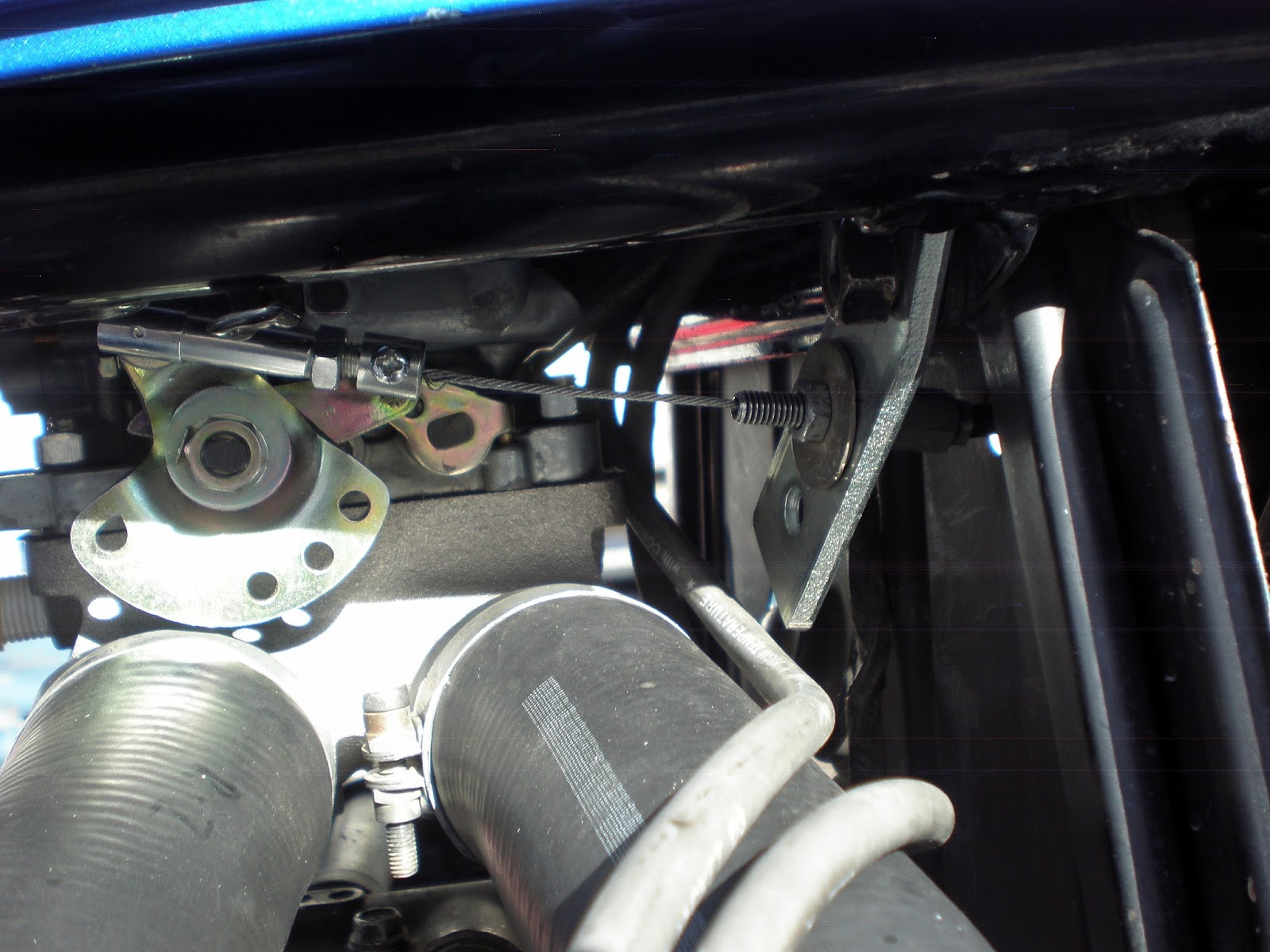 Air Filter had plenty of clearance and the OEM Tool Tray still fits in its' place. I ordered a Weber 32/34 air filter but it didn't quite fit, so had to modify the base plate a bit to make it fit. 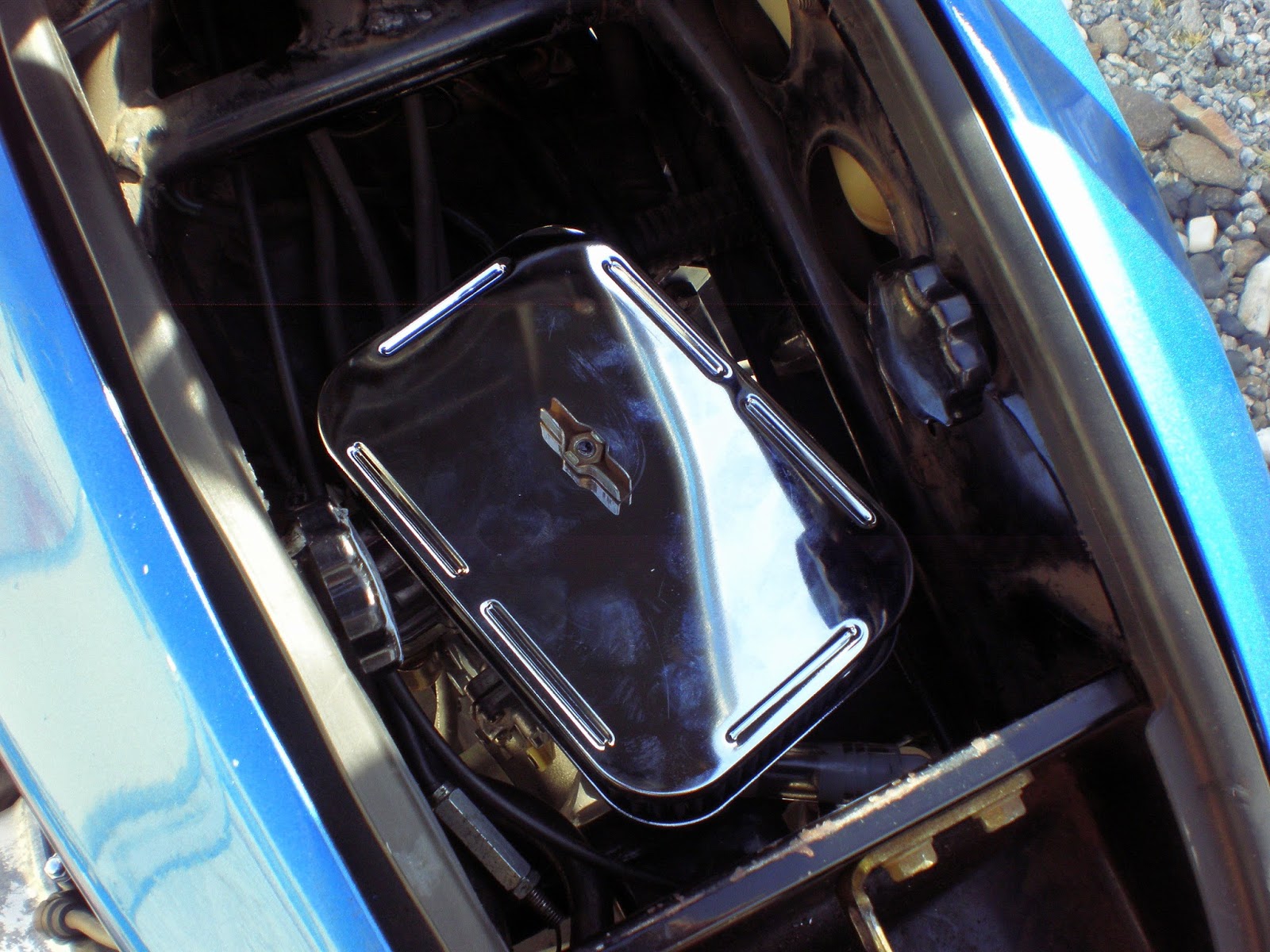 Left side view:
The carb came equipped with an electric choke assembly which was quite large...not enough room "under the hood" for the assembly. I removed the entire assembly and plugged a vacuum port behind the heat coil. I could have likely been able to plumb in a manual choke but so far the bike started easily with no choke....just a couple throttle twists to prime the system prior to starting.
One issue I'll need to address is a "preheating" system to warm the manifold plenum. The proper scenario will be to have a chamber welded to the bottom of the plenum and circulate engine coolant to heat the plenum. The carb supplier says this is a "must" for proper atomization of the fuel. He was an Engineer for G.M. and knows his business. Since I have no way to perform the welding / fabrication myself, this addition will have to wait until I hook up with a reasonably priced fabricator who is willing to take it on....then I'll also need to "tap" into the cooling system to access coolant.
I've also been thinking about alternate plenum heating options. I wonder if one could adapt an electrical heating system...maybe using something like a "heated grip" type element...hmmm....food for thought? Downside would be the additional draw on the charging system, but it might be an easier (cheaper?) option.
According to the Engineer, the plenum does not need to be "hot", only warm, to achieve more efficient fuel / air mixture atomization. 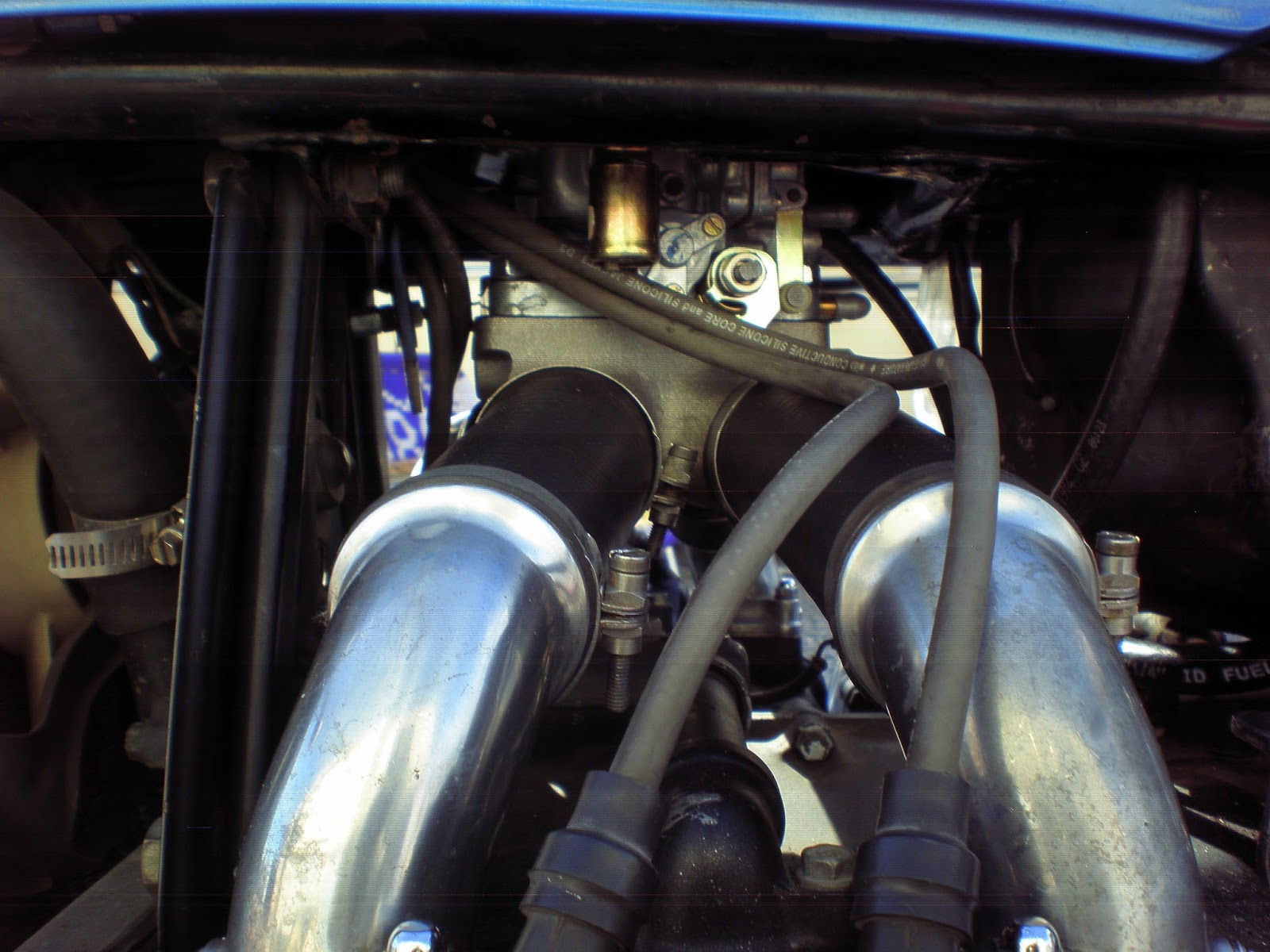 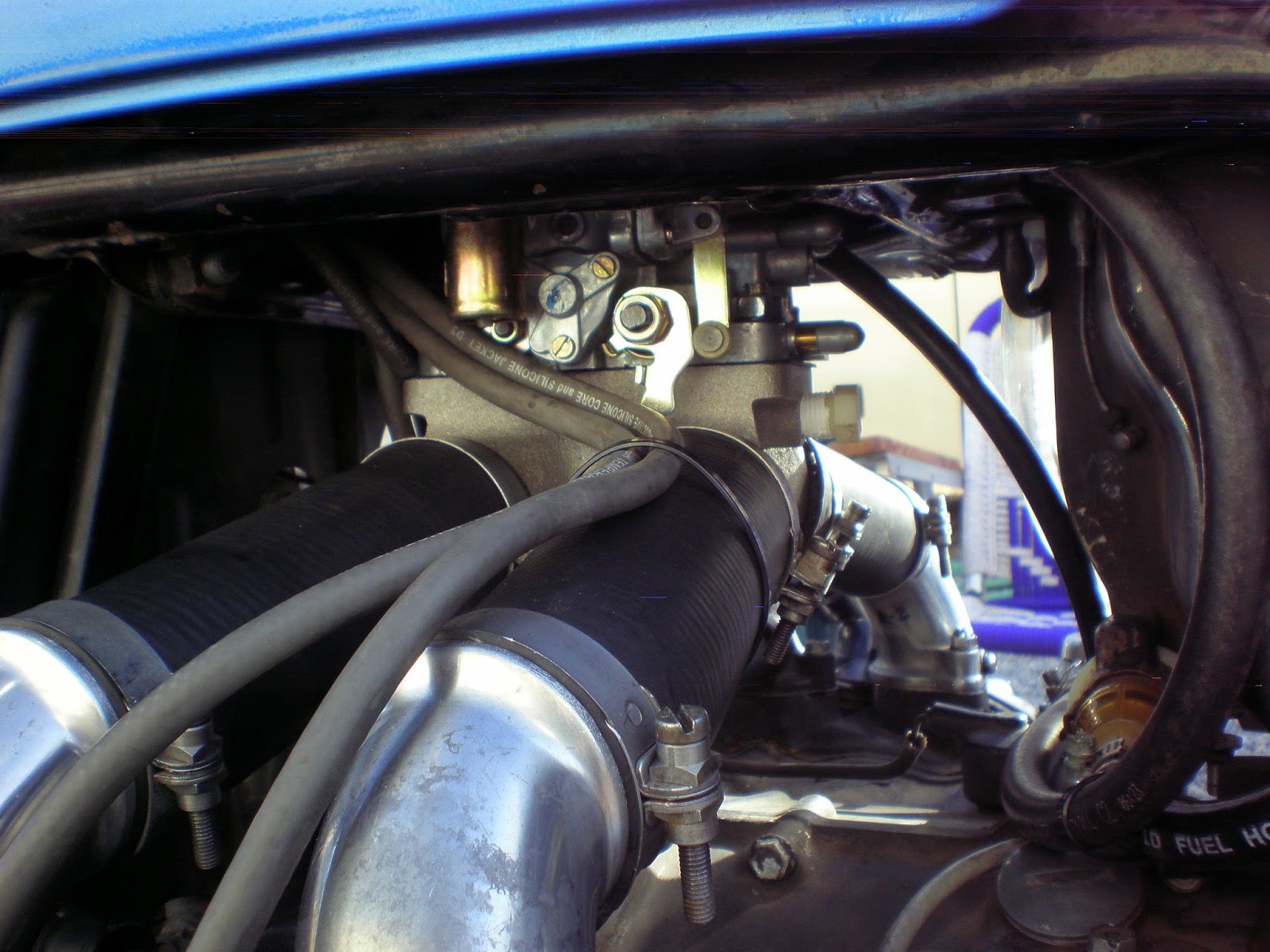 Plenty of room under the manifold to fit a heating chamber to the plenum if I go that direction.
Initially the carb sat lower when installed....this did not allow room for the fuel inlet fitting up in the shelter area. I eventually fitted some 20 gauge 1 1/2" chrome steel pipe inserts inside the 1 1/2" rubber fuel tubing. The inserts fit tightly in the tubes and also reinforce the tubes as they are not "vacuum rated" and would collapse under throttle application. When all assembled, the steel tubes made the assembly more "rigid" and raised the carb / manifold high enough for fuel inlet fitting clearance. 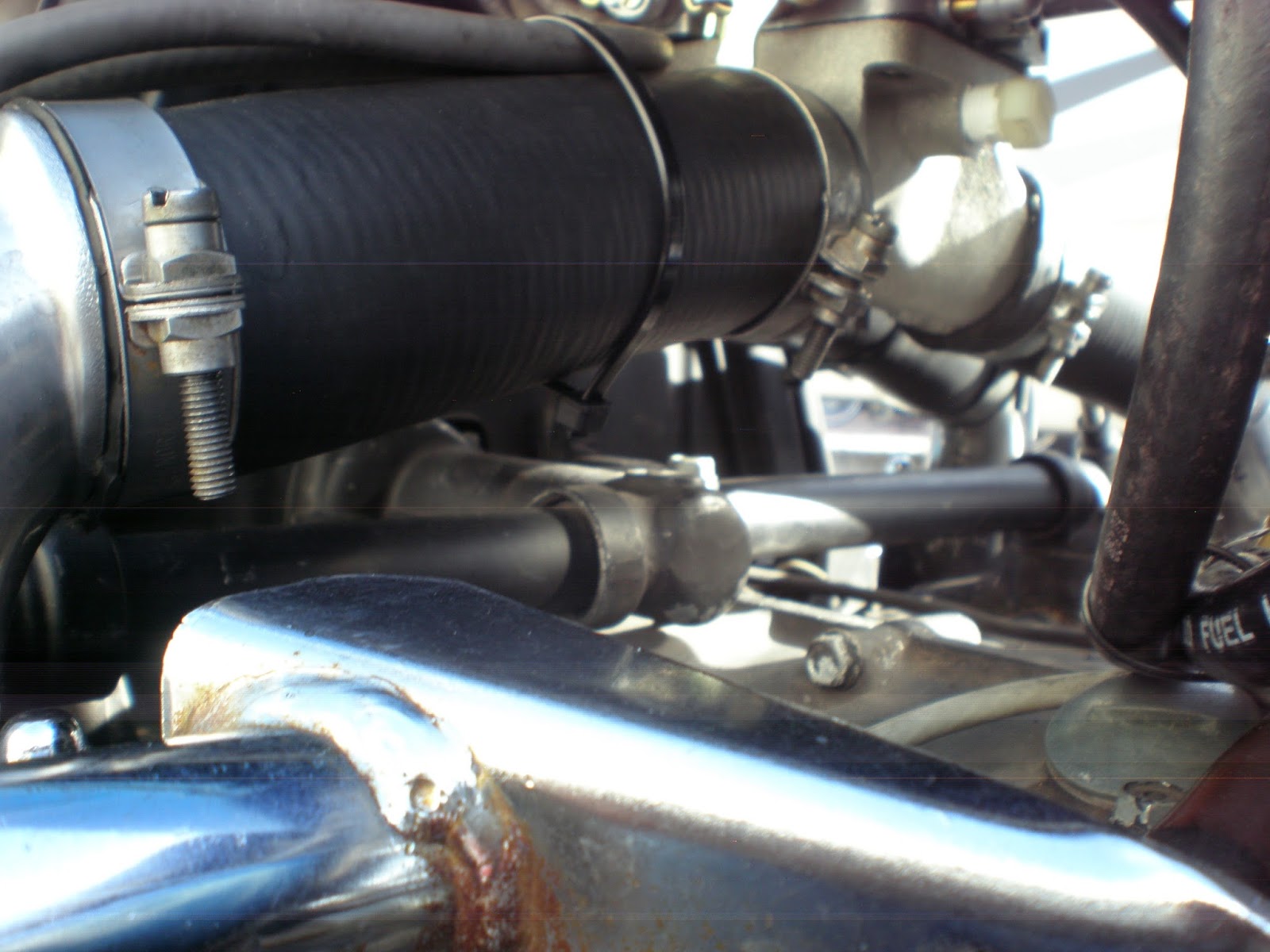