So....a little late with this ride report. But better late than never.
The Paonia Colorado ride was uneventful. Rode through some beautiful country. I'll let the few photos I took tell the story: 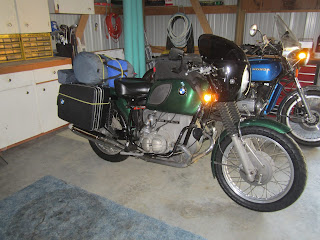 Originally planned on riding the GL1000 Honda in the background but after experiencing some issues on a 100 mile "shake down" run decided to go with the simple, more reliable R75/5. Downside was that the BMW needed new tires, so tires were ordered at the last minute and received in the nick of time. Wheel bearings were lubed and final drive splines cleaned / lubed. The final drive splines are near their "end of life" but enough left to finish the Summer. 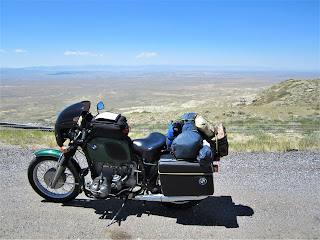 Decided to split the ride to Paonia into two days...stopping at Rawlins WY. the first night. Photo above and below is in the middle of nowhere between Riverton and Rawlins WY. Bike worked fine without any issues. 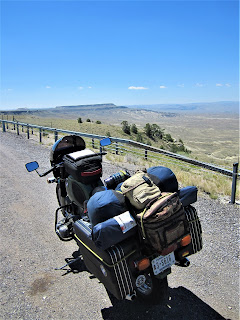 A long ways between gas stations in Wyoming. Arrived in Rawlins WY. at about 3:30 PM....way too early to stop for the day. Plus it was hot as hell and the campground I stopped at had zero shade. Decided to proceed into Colorado....maybe Craig? 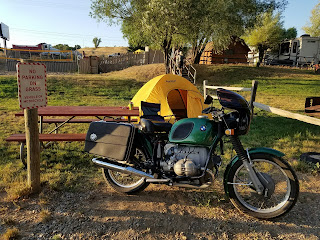 Ended up at the local over-priced KOA outside Craig.. Explained to the owner that I only wanted to "rent" the camping spot, not "buy" it....but the price was still $29.00 for a tent spot. Most KOA's are higher. Place was OK and had spotless showers.
A young couple in an SUV set up a tent next to me. I noticed a large alcohol selection being placed on their table. I jokingly asked "When does the bar open?" The cute gal replied "Right now!" Her husband came over and we visited into the wee hours of the night....with a LOT of drinks. After an hour or so of chit chat he asked me what I did for a living....and I asked him. Ended up he was a Police Officer from Indiana. We had a great visit and it was fun to visit with a cop, "off the record"....lol.... He gave me a lot of insight into a Police Officers experiences.
Upon taking down my tent the next morning found that the sight was absolutely infested with "earwig's"...a pesty little bug which hides everywhere. I ended up rolling a dozen or so of them in my tent....they accompanied me to Paonia. 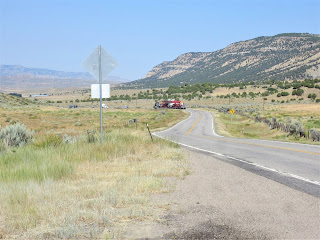 The following AM I pressed on towards Paonia CO. On a remote stretch a pickup forced everyone off the road to make way for a HUGE oversize load. Their traffic control was poor and vehicles were somewhat trapped and asked to pull nearly into the ditch. I luckily stopped right at a pullout spot so just shut down and watched the show. 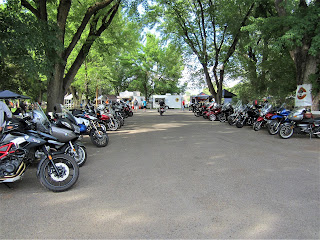 Arrived at Top O' The Rockies Rally in mid afternoon. I wasn't planning on meeting anyone there so just set up my tent at the first spot I saw. Ended up next to some guys from Texas and had a great time visiting with them.
Later I did run into more folks I knew from California. 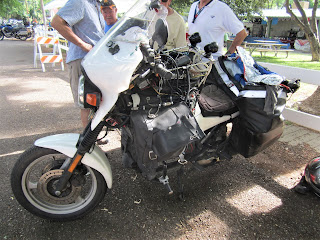 This "K-Bike" was parked on the site. 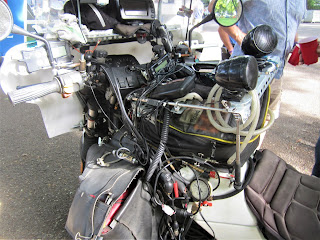 Some "modifications" had been performed....what a mess! 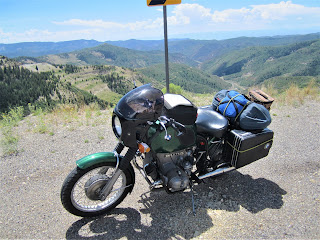 I awoke Saturday and after wandering around the campground came to the conclusion I wanted to hit the road a day early. I checked weather reports and saw that rain was forecast for Sunday. Plus 700 bikers would be hitting the road about the same time.....on the road I go!
I took an alternate route heading North through Grand Junction - Rangely CO. 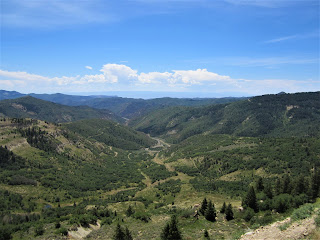 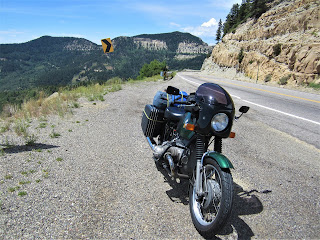 I want to go back through the area again....maybe on the sidecar with my Wife. 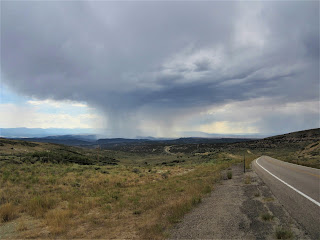 Got caught in a pretty torrential rainstorm somewhere in Colorado. Stopping wasn't really an option although I did see a pullout with a cover....but decided to "ride it out". Wasn't too bad and I think I missed the worst of it. Later in the day I passed through the "Flaming Gorge" areas (above) and had another BIG storm right next to me. Only got a few drops as I was outrunning it.
I met a large group of Harley riders, maybe 60 - 70 of them. Mostly dressed in "do-rags" and tank tops with an occasional helmet. They rode directly into the mess photo'd above. They couldn't have faired too well. 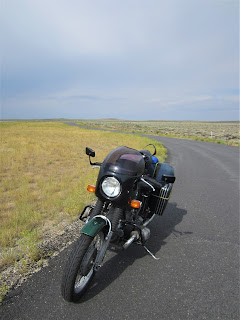 I made it to Rock Springs / Green River WY. that evening. Stayed at the local KOA. That place really screwed tenter's with a $43.00 a night rate. But the tent spot was enclosed / private with a wooden sun shade. The showers were atrocious with a toilet nearly in the shower stall.....of course some dude was shitting up a storm 3 feet from me while I showered. It was BAD. Nuff said....The next morning as soon as my tent / gear was stored, the rain came. Nothing too bad and had minor showers over through South Pass. Temperature was much cooler.
Near Riverton WY. the bike "stumbled" on me a bit...almost like it was running out of gas. I switched fuel valves and the symptom relieved. Filled the tank at the next station and the bike seemed to be fine again. Not sure what was going on but it didn't reoccur.
Remainder of ride was great and no more showers. Back to "home" base by 5:00 PM.
Rode a total of around 1500 miles in 4 days. Just enough.