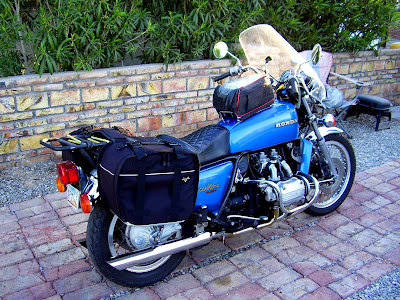 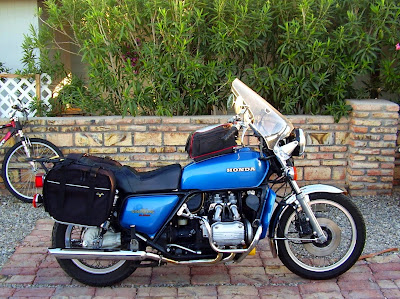 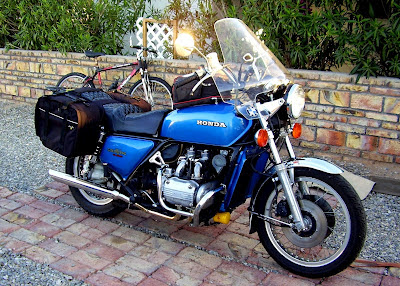 Posted by BMW HACKER at 7:54 PM No comments:

A buddy of mine picked up a hell of a deal on this old sidecar a couple weeks ago. Very nice rig and a high quality built chair. Nice interior and pretty heavy frame. He got it very cheap by being the first in line on a Craigslist ad. He got lucky! 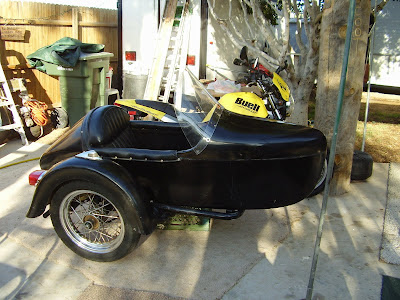 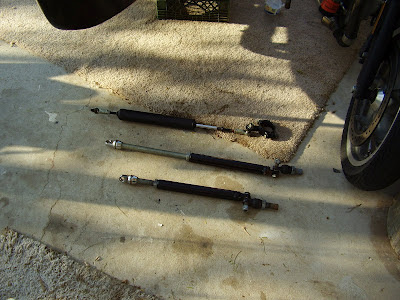 The lower rear mount went on easily and bolted right into place....the upper rear mount was attached low at first, but I didn't feel the attachment was good due to the proximity of the fuel tank....if the mount was to rotate it would contact the tank. We moved the mount up, just below the seat on the main frame. This location also gave it a better geometry.
The front upper mount went on in the only place it could go, due to the fairing mounts, etc.
The front lower mount gave us some grief. Vetter's intention was to install a longer engine mounting bolt and attach to that. We ran into a totally rusted solid bolt in place since the bike's birth no doubt. Heating, beating, cussing did no good.....reanalyzing theat attachment showed that the mount would also hit the exhaust header and would have required denting in the header for clearance....not a good option....we ended up modifying the lower mounting plate and cutting sections off for clearance. Also drilled additional holes for an additional clamp. With some tweaking and enginuity we got it into place. 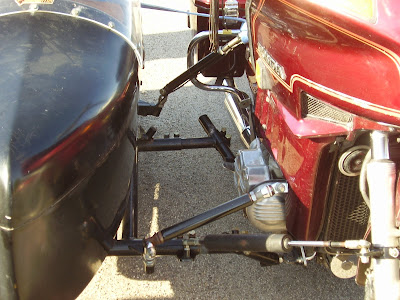 The steering damper mounting plate had to be moved to clear the upper front strut but all went together well. The steering damper is a nice unit and looks as new.
Getting the geometry set took a few hours. The cylinder heads position limited the amount of rotation for the front lower mount but we finally got it into an acceptable location.
The wiring caused me a little grief but we got everything wired in and working. tomorrow we'll install a pair of turn signals on the hack fender. 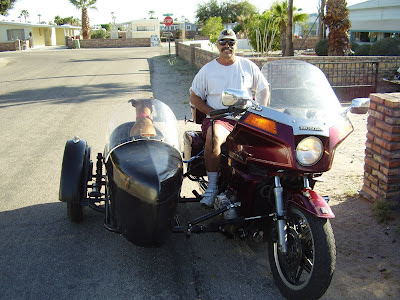 The bike seems to track well and the DMC supplied mounts gave us nearly everything we needed....with a little creativity. Brian's passenger needs to figure out which way is which? 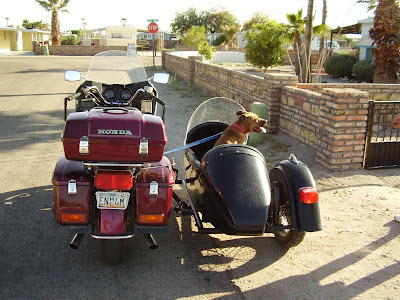 I love the "boat tail" configuration of the side car. This side car is a perfect mate for the goldwing with its' wide stance.

Gosh, with all the excitement of picking up the "new" old Honda Goldwing, I forgot to finish up the ride report from the last day home from Death Valley.
We ended up in San Clemente Ca. and toyed with going up and over the 74 to Lake Elsinore but that would have been a very long day. We ended up going down I-5 to Oceanside then East to highway 76 to Julian.
We woke up to pretty heavy fog or "marine layer" as they call it on the coast. By 9:00 AM the fog was lessening and visibility was over 1/2 mile so we were good to go.
We made a stop near Bonsall and then headed towards Julian. 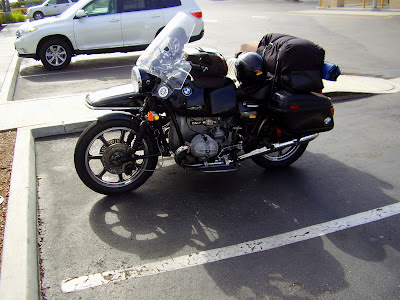 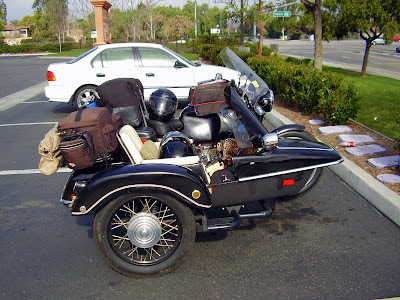 took a quick break near Pala Ca. A lot of Indian Casinos up in that country now. The ride was beautiful and I had to shed a layer as it got warmer going inland. 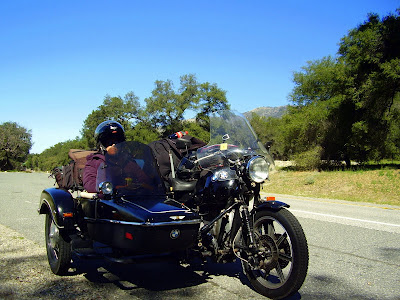 Stopped in Julian for expensive gas then crawled down Highway 78 and the Banner Grade towards the desert. The temperature went up as we went down.... the Banner Grade is a steep 10%+ grade with 10 - 15 mph warning on the multitude of corners and switchbacks. Not a real fast road for the loaded sidecar. On our desent we did not encounter one vehicle coming up from behind and I took my time going down, taking in all the beautiful scenery. A great ride down into the desert. 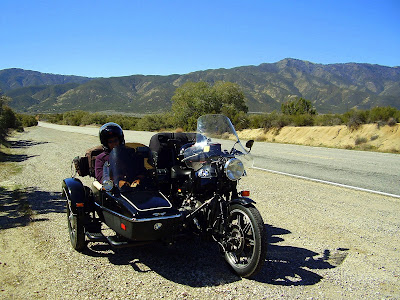 I love this section of the desert. We ran towards Octotilla Wells on Highway 78. A great straight section....a couple of crotch rocket bikes came by while we were stopped....they must have been at 100 mph + as they screamed by heading into the desert. 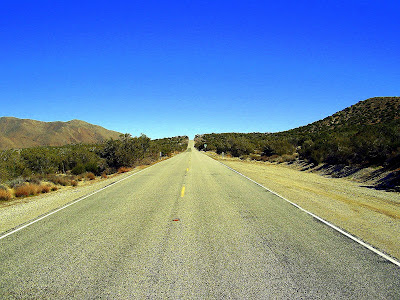 Looking back up the 78 towards Banner Grade. 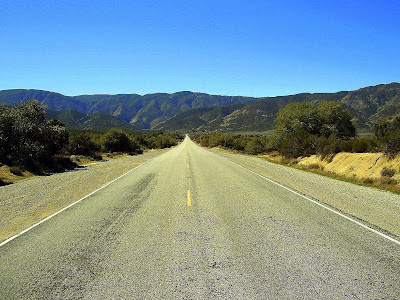 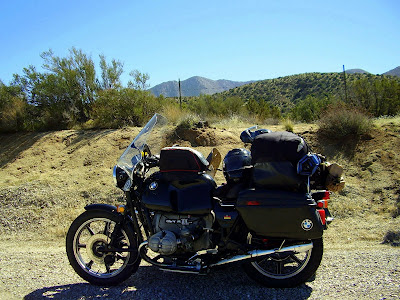 The terrain gets rocky heading down deeper into the desert. 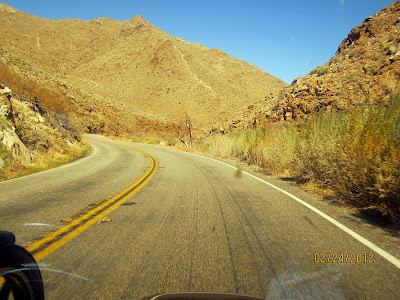 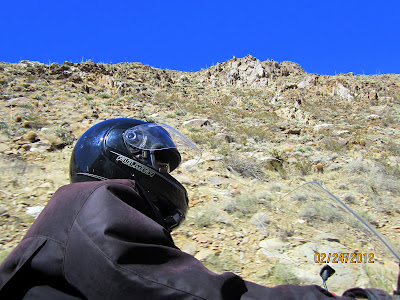 I've always wondered where the "Iron Door" was located....and we finally found it.....nothing like a cold beer and a frozen / micro wave corn dog for lunch! 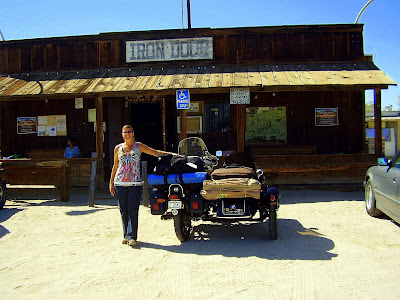 The "Iron Door" was always an "Airhead" watering hole back in the days......now it's also a official "Clamper" Watering Hole too. Leaving there, we headed into Brawley Ca., then the back road through Glamis and then Ogelby Road to I-8...then Yuma.

This was one of those days when it was good to get home, but I didn't want the ride to end.....Time to plan the next ride before we head north for the Spring.....kinda thinking about the Central AZ. mountains...?

Posted by BMW HACKER at 9:46 PM No comments: 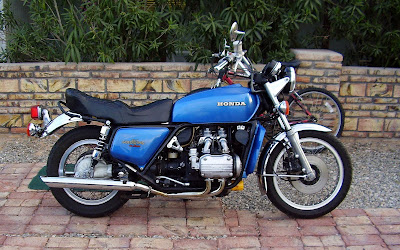 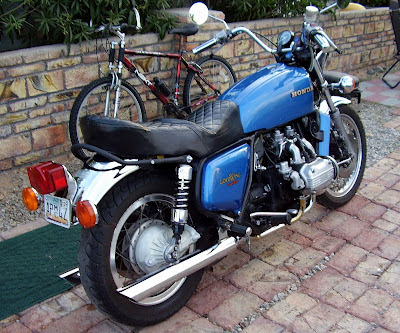 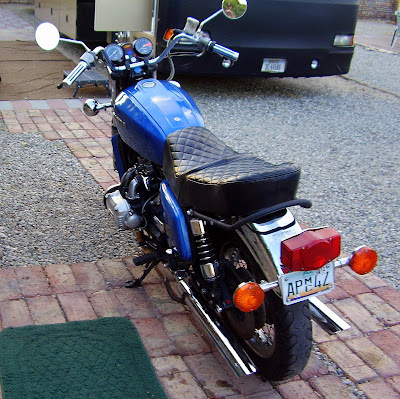 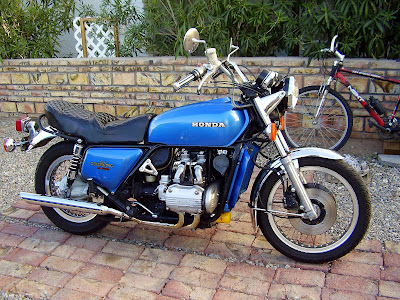 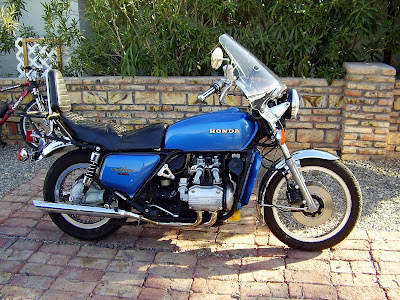 Posted by BMW HACKER at 7:30 PM No comments: