I picked up this 1979 Suzuki GS850G in montana a couple months ago for a project to turn over.
She's been dormant for a while so didn't get to hear it run. Therefore I bought it pretty cheap. 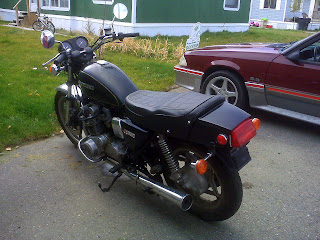 We arrived in Yuma, AZ. on Friday so today I got around to messing with it. The electric starter didn't work, but I found a bad fuse so after replacement the starter worked. added some gas, and gave it a small snort of starting fluid and she fired right up, but didn't want to keep running. This model Suzuki utilizes a vacuum operated petcock so I found that a vacuum leak was causing a loss of vacuum to the petcock, therefore no fuel was passing to the carbs. 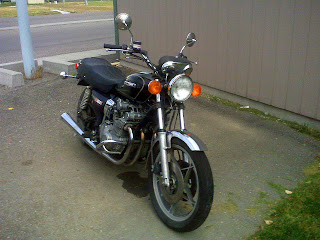 I deceided to pull the carbs and found everything nice and clean. Fixed the obvious vacuum leaks and she fired up and ran / idled like it should.
Took it for a quick ride up the block and it ran very well. Still have some vacuum leak issues at the manifolds so will address them, then clean the bike up better. She'll need a little attention in some other areas but nothing major I can see at this point. Got lucky considering I didn't know if it would even run. 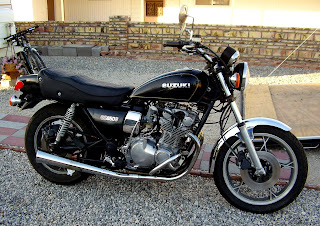 Monday 11/26/12
Installed clamps on the intake manifold boots and that took care of the vacuum loss....a previous owner failed to install clamps when the carbs were removed, it appears. I drove the bike a few miles today and it seems to run quite well. The mufflers appear to have been swapped from another donor. The hangers are home made and the mounting clips appear to be in the wrong place.(?) Probably had some bad mufflers and someone changed then at some point. 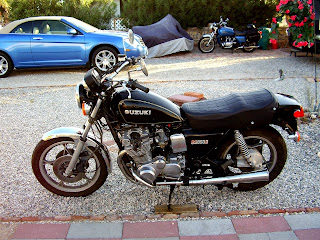 Also spent a little time working on the old Goldwing today....checked valve clearances, changed the oil & filter. Drove it a few miles over the course of the day.
Nice to be in Sunny AZ.....Winter is approaching up North.
Posted by BMW HACKER at 8:49 PM 1 comment: