We arranged to meet a prospective seller in a small town about 40 minutes from us this AM. We met as planned and drove 5 miles out to his relatives farm. He had pulled the old bike out earlier this AM.
Arggggg...no treasure found this time.
We talked about the old bike for quite a while. I could tell it was an early 70's short wheel base frame. A 1971 I figured. The fuel tank was a 1972 or 1973 "Toaster" tank, missing the side panels and BMW roundels. The engine had a kick starter so I figured it was a 1974 model.
He had new tires on it with less than a 1000 miles on them.....10 years ago. The battery was "new" too.....10 years ago. The owner has over $1000.00 invested in the bike but I could not give him anywhere near that amount. The engine turned over with good compression and it was "dual plugged" years back. I kept asking him for a price but he just couldn't come up with one. I through him a reasonable offer since I have no idea of the engines / drive trains condition. He said he has the fenders, tail light and turn signals somewhere and maybe the "Toaster" tank panels....also has a clear title so the deal was struck and we loaded it up on our trailer. 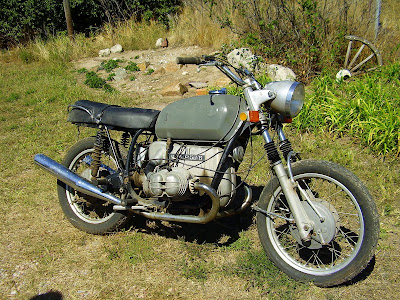 I made a $2.00 investment and took it to a car wash to remove a few years worth of dust and grime. 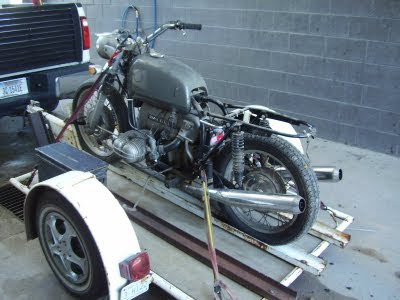 The after market mufflers looked odd. After looking closer I see that they are mounted on the wrong sides and upside down. 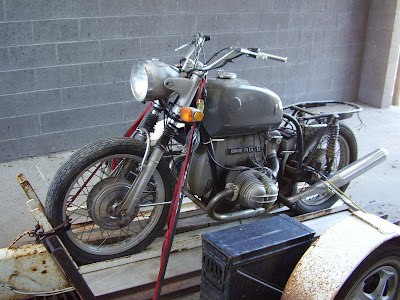 The original headlamp has been replaced by a vintage "Puch" head light nacelle with a Puch speedometer. Puch is an Austrian made motorcycle. The large over sized headlight began to grow on me right away. 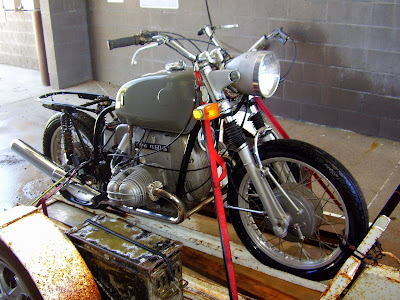 The wash job removed some grime but there's more to go at a later time. Over all the main components of the bike look good. I pulled the carb bowls off and they are clean. The throttle slides are free. The tank interior looks a little crusty. 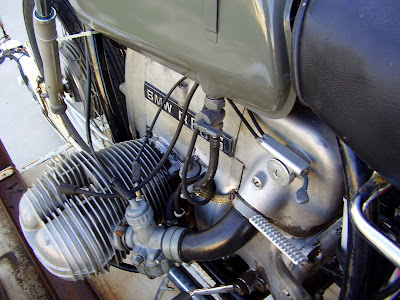 The Puch speedometer is in pretty good condition. 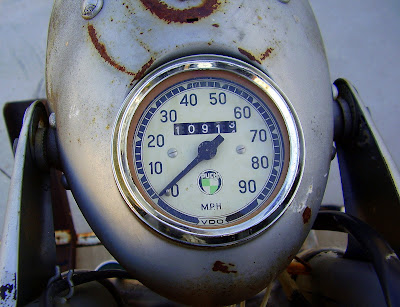 I spent a little time cleaning some alloy parts and they cleaned up well. 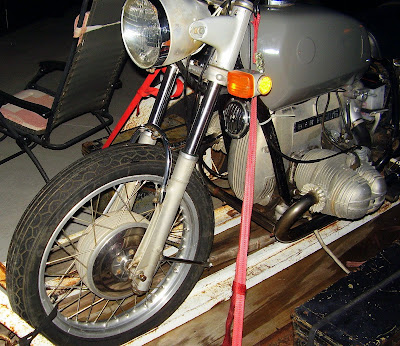 So now what to do with this? I think it will possibly be a runner so I'll take some time to get it running. I think I have everything needed to get it fired up. The wiring is pretty shaky so I'll need to sort out some things before hooking a battery to it. 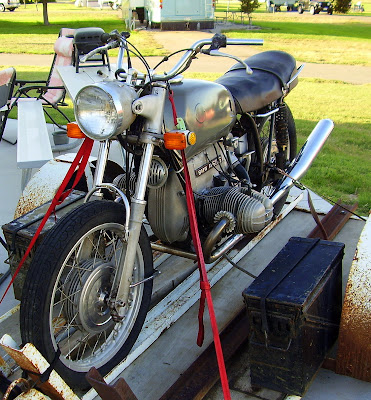 I checked the engine serial numbers and the frame serial numbers and my guesses were correct; a 1971 frame, `1974 engine and a 1972 or 1973 fuel tank. It sports some high BMW handlebars of unknown origin.
So maybe I'll make a rat rod out of it or a cafe style bike or?????
Might be fun to get the fenders on and just get it running to ride as is.
No more bikes for a while as I am out of room now.
Posted by BMW HACKER at 8:26 PM 2 comments:

Whenever my work takes me to an area for a few weeks I always run some Craigslist Ads in search of old motorcycles.
Fishing for BMW's is a favorite pastime for me.
I have a couple of bites here in NE.
I found a guy who has a bunch of old bikes, one a nice old Norton Commando, a couple of years worth of dust on it but very straight. But that is over the top for me. I want old crap that is cheap.
The Norton owners Brother in Law has an old R100 that I want to take a look at. Sounds like it is partially apart so that is good for me.
I also just had an inquiry from a guy with a 600 BMW.....no more info than that so I'll be checking out both those potential catches.
update:
The 600 BMW seller gave me a call and it appears he has a "rat bike" that he built years ago based on a 1972 BMW R60/5 chassis. He had a rebuilt later model 600cc engine (dual plugged) and has a later model 5 speed behind it.
Basically he built 3 bikes into one. Not sure of the overall condition of it as it has sat for over 5 years in a garage about 35 miles from here. Unfortunately he left it with a tank of gas which is too bad.....Hopefully it will be a good score if I can get it cheap. I have made arrangements to take a look at it this Sunday morning.
Posted by BMW HACKER at 3:28 PM 1 comment: 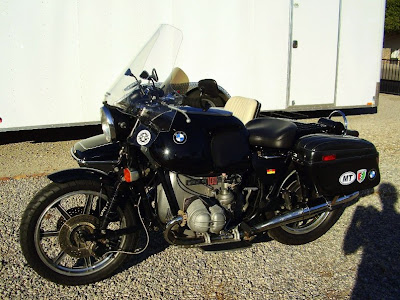 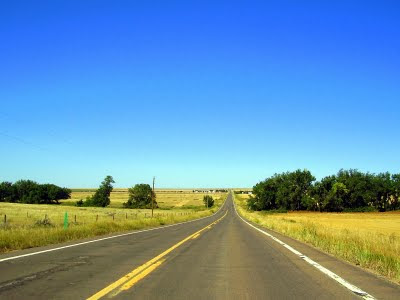 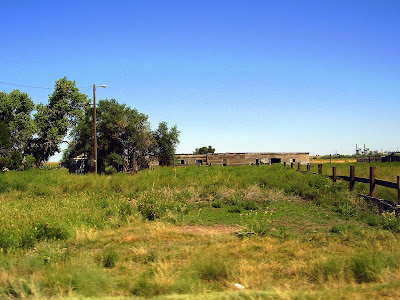 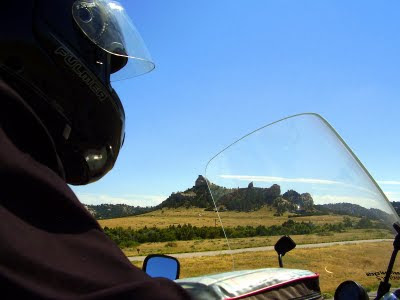 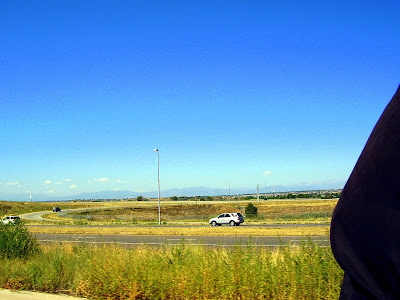 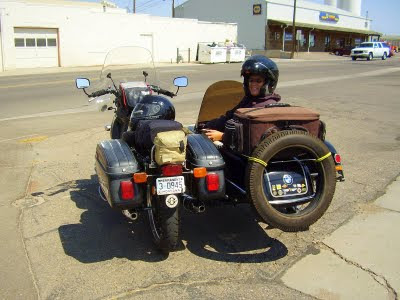 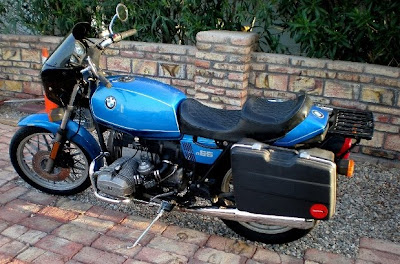 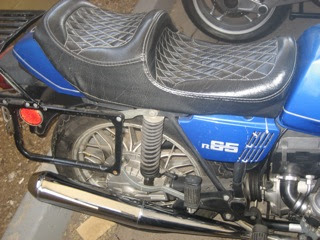 I layed some clean cardboard under the bike so we'll see if any oil leaks reappear.
Posted by BMW HACKER at 7:21 PM 3 comments: