Driving into town from my office today, I passed what appeared to be a shotgun laying on the shoulder. Got just a "glimpse" of it and then thought maybe it was a chunk of old tire or something. Had to turn back and check it out. A Mt. Highway Patrolman was just ahead of me and he did not see the item. I U-turned back and sure enough, there lay this: 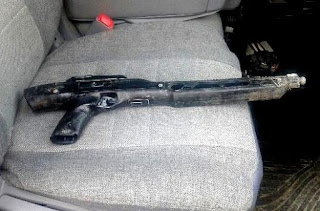 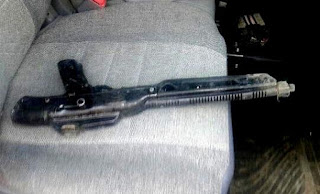 Definitely a "useless modified weapon of ill repute." The section of road I was on was narrow and on a blind corner so I grabbed it up and continued into town.
I had an appointment I couldn't miss so took care of that, then called the local Police Department.
The weapon was a sawed off  9 mm or 45 cal. rifle.
The Police Officer I turned it over to said there had been a Home Invasion Robbery earlier in the day and the culprits get away route was on the same road I found the gun. The weapon was likely discarded as they ran from the pursuing Officers.

I made a Facebook Post showing the weapon I had found. An old classmate of mine happens to be the current Montana Attorney General and he "private messaged" me asking about the weapon. He had not seen the next Facebook "Post" revealing that I had already turned the gun over to Law Enforcement.

I am impressed that the Attorney General of our State pays attention to Social Media and involves himself at personal levels. His Folks / My Folks were good friends and we were raised with the same ideals of "Ethics & Honesty".

My "Hat is Off" to our Great Montana Attorney General, Tim Fox!
Posted by BMW HACKER at 8:07 PM 1 comment: