I wasn't planning on the Death Valley Airheads Rally this year but my darling Wife insisted that I attend. Some friends offered to meet up and ride there together so I took them up on the offer. We met at the north end of the Salton Sea at Mecca Ca. and proceeded from there. We planned to camp at Joshua Tree Natl. Park and found a great campsite there, pulling in around 4:00 PM. 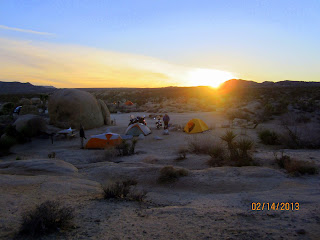 Some great rock formations and a nice sunset at the end of the day. The night time temperatures got down well into the 30's so the night was pretty chilly. 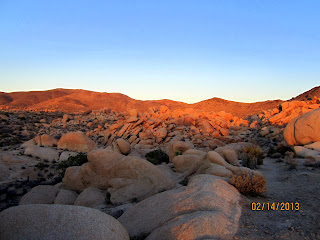 We had an "end" campsite and the sites were limited, only 16 sites at this camp area. Good thing we parked when we did as the place filled up quickly at the end of the day. 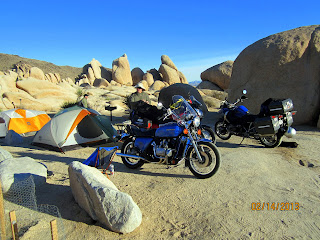 We got rolling fiarly early and headed through 29 Palms where we missed a turn and ended up at a dead end.....had to back track 3 - 4 miles but finally got on the right track. Got behind about two dozen Marines out for a day ride to Kelso. We stopped there for lunch. Looking over the Marines bike line up this old "Rat" bike stood out. Old 750 Honda Chopper. 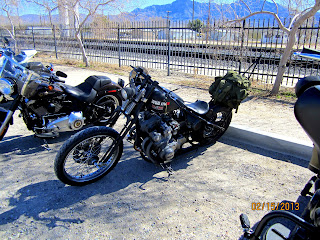 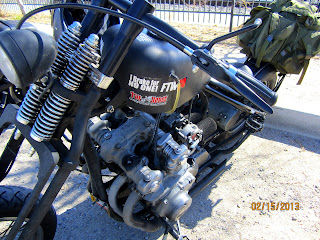 Took the "Bad Water" entrance into Death Valley which was a great ride into the valley. 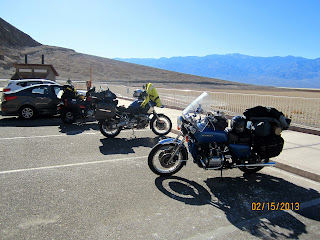 Arrived at Furnace Creek at a decent hour and got set up with another 100 or more other riders.
This guy had his BMW torn down looking for an electrical issue which he fixed. 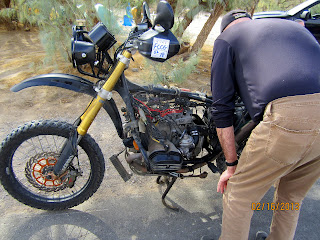 Only 2 sidecars in attendance...this is an old Russian Dpner. He rode it off only to come back later to get a trailer to haul it back....good old reliabe Russian engineering! 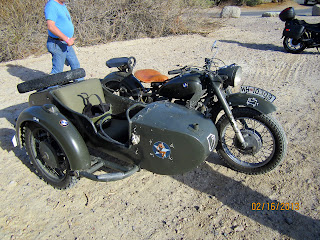 Some 4 legged attendees too. 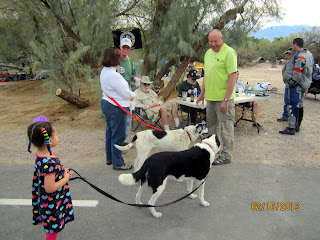 Weather hit the 80's during the day and the nights were pleasant....no wind and a great day on Saturday. 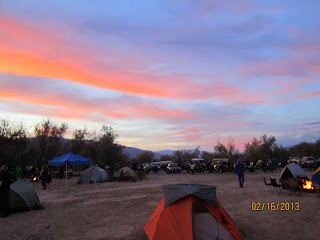 Many folks went for rides but I elected to lay low and visit with old aquantances and made a few new ones too. 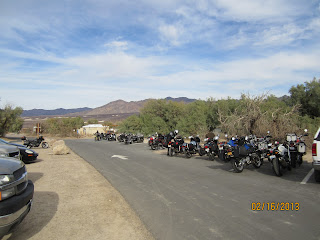 A number of friends were stating until Monday then riding over to the Panamint Valley to camp another night. I decided to head back to Yuma on Sunday so had a nice 450 mile run home. Stopped along the Salton Sea for a break. 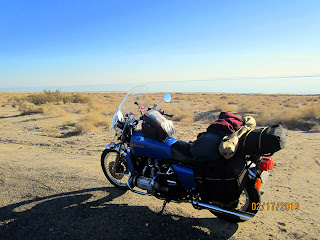 I came back the same route and had an enjoyable ride. Missed numerous great photo op's but was on a mission to get home before dark...didn't quite make it but arrived safe and sound. 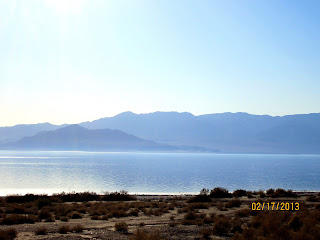