I have always heard of the Famous "Tornado Alley". Little did I know that I would be spending a summer in the middle of it. The above photo was taken three weeks ago about 25 miles from our present location. Friday night we had Tornado warnings and one hit a Pampa Texas, a little town 35 miles southeast of us. It missed the town proper but did wreck some buildings, threw vehicles around and took out dozens of power poles. Luck of the draw I guess. The news reports tell people to "take shelter' during eminent events but Fritch Texas has no such place to hide. I asked one of the Park Ranger officers I know about that and he said to "curl up in a ball and kiss your ass goodbye" if you are caught in one. RV living is not very reassuring in such a weather area. Darians car got dinged up a bit three weeks ago ....hail about the size of quarters hit us. The storm at Pampa dropped hailstones the size of tennis balls and bigger. Some up to 4 1/2 inches. Just glad it missed us. 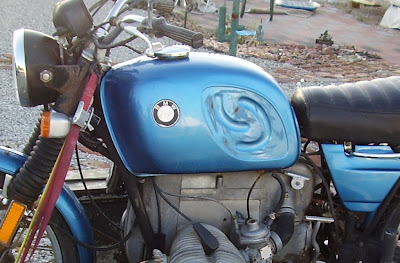 I took this 6.2 gallon touring tank to a local paint shop and decided to have it fixed up. The tank was in fair shape except for the right side had a puncture wound in it. The wound had been soldered up years back but was not well done. The body guy will grind it all out , re weld and repair the tank. BMW black and 5 coats of clear should make it look like new again. I couldn't find any other dents in it. The previous owner said the bike fell over onto something, puncturing the tank. I have the 6.2 gallon police tank for the R100S project so I'll probably sell this tank. It will probably cost me more for repairs ($200.00) than what I can sell it for. We'll see...... 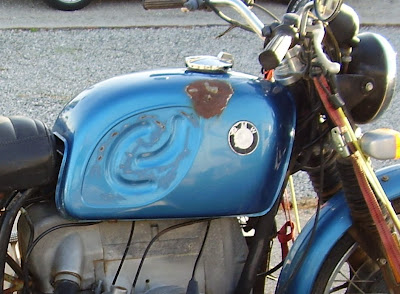 I snooped around town after work the other night and found a well renowned upholstery guy in Fritch. I took this ugly old 1000 mile solo seat in for him to recover. He said it'll be three weeks or so but at $85.00 the price is definitely right. The old white cover is rotten and was not fitted properly. It will look real nice when done. 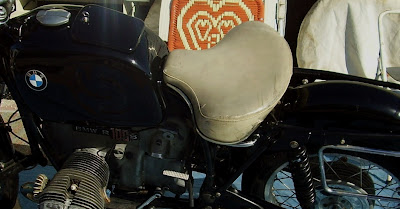 We'll pull the R75/5 out of the trailer this week and get the sidecar hitched up. Maybe we'll take a road trip the coming three day weekend. Not too many places to see around here but I've spotted a couple of scenic canyon areas within a hundred miles so maybe that willl be our goal. There are hundreds of small towns around here and a multitude of secondary roads running every where. The scenery leaves a little to be desired but actually is kind of pretty now that things are greening up.
The one thing that has really struck s about this area is the friendliness of the locals. People go out of their way to visit and be helpful. Texas is a pretty good place so far............except for the tornados and the hail.