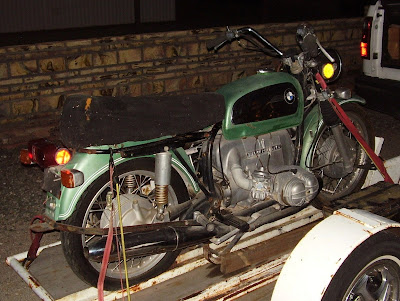 We made a very quick trip to Las Vegas today. Left at 7:00 AM and back to Yuma at 7:00 PM. Picked up this green gem from a guy in Vegas. I'm showing a night shot cause it doesn't look so good in the day light. The right side is also the "best" side. A previous owner had a left side crash which damaged the left side. The cylinder/head is missing on the left. From the looks of the left side muffler the old girl took a serious hit. The seller thought it was a 1972 model but the serial #'s tell me it is a 1973 model, although manufactured in September 1972. 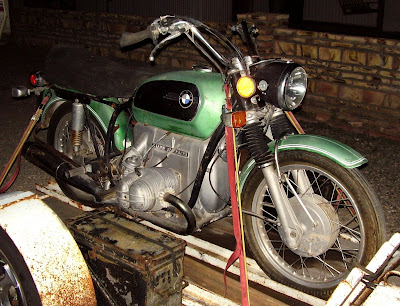 Surprisingly the headlight assembly survived the crash as did a lot of other parts. The left side of the tank is beat up and the "toaster" panel is gone. This bike could be resurrected but the cost would be prohibitive. If I had been saving all the old parts I've had in the past year I could have easily repaired the bike. I just don't want to take on another major project / money pit. It would need a different engine, carbs, tires and a lot of misc. pieces to get it going. I would easily spend another $800.00 to turn it into a running bike. After the wreck it was involved in, likely the frame and/or forks could be bent too. So with that in mind it will go under the "knife" tomorrow and be dismembered. I found a pair of keys hanging from a wire and by chance they fit the fork lock and seat lock. Don't often find locks with keys. It has a nice aluminum fuel cap which will be used on the /6 police tank. The fuel cap is about all I need off the bike. I will save all the little misc. pieces and bolts. A previous owner was definitely a hack. It has a Suzuki (?) throttle control, rear tail light ingeniously grafted on and a home made trailer hitch also. The guy also drilled holes in the front turn signal housings and appeared to have bolted fairing / windshield mounts to the turn signals. That basically ruined the housings. He also has nice mini "ape hanger" handle bars installed too. Well, it will be a nice Ebay donor for sure!
Posted by BMW HACKER at 9:13 PM