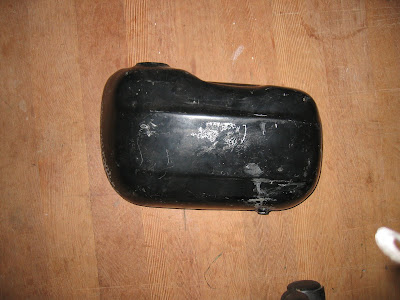 I purchased an orphan Luftmiester saddle tank a while back for use with the side hack. It was ugly with many layers of paint. I used some chemical stripper ( my first time) to remove the paint. Ends up there were many layers of paint with a base layer of some sort of HEAVY rubberized factory coating. It was a nightmare to remove. Spent hours to get it all off and not damage the aluminum underneath. There were stress / tool marks from the original stamping so had to take varying degrees of emery cloth to remove the stamping / tooling scars, then used progressively finer paper to polish it. It came out pretty good although any minor dings in the aluminum now show up. I much prefer the look of the raw aluminum. The tank won't fit on the BMW as it interferes with the kick start lever. I might mount it to the left side of the side car. It has proper height to gravity feed to the carbs and will add another gallon capacity in a pinch. We travel a lot of back roads and gas stations are sometimes far apart. 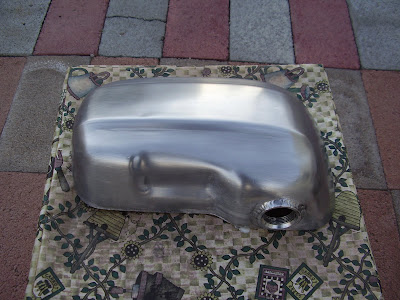 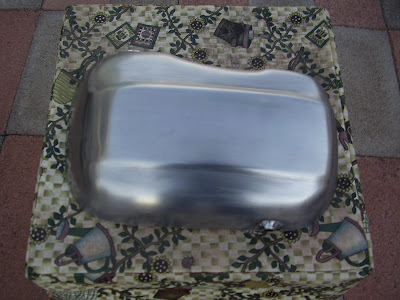 Now the next challenge if hunting down a proper fuel cap. First I'll try the IBMWR list and if that doesn't work I'll have to do some scrounging. Last resort will be having a machine shop fabricate one from billet. ($$$$) 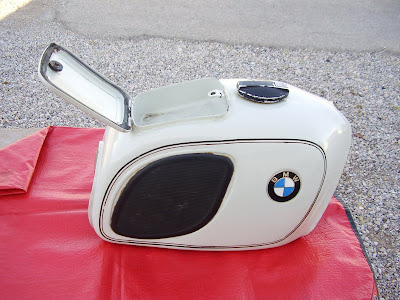 Spent yesterday working on small projects around here. I have decided to keep this old Cop tank for now so ordered some NOS BMW Badges for it. Attempted to remove some ugly yellowish stains from the tank with rubbing compounds but to no avail. Whatever the yellow crap is, is there to stay. Looks like a paint job is in order at some point. Have an excellent painter in Dillon MT. who works dirt cheap. Maybe I'll drop it off to him at some point. I ordered a new pair of badges from Hucky's for $20.00. Also bought a set of new turn signal gaskets as mine are all rotten, $3.00 each. 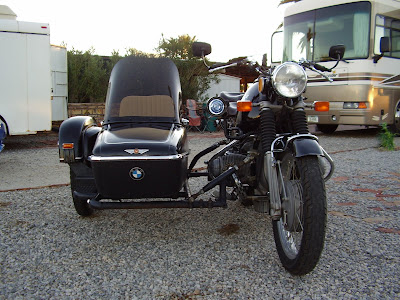 I removed the bikes' windshield yesterday as there were two little ears which made contact with the headlight ear reflectors. This caused some undue stress on the windshield and a tiny crack appeared on the front of the windshield. I removed it and cut off the little ears with a grinder. The shield now is "relaxed" when mounted and not under stress. A new fork lock assembly is in the mail ($25.00), I am a bit nervous about leaving the bike outside all the time so the lock up will give a bit more security, for what it's worth. 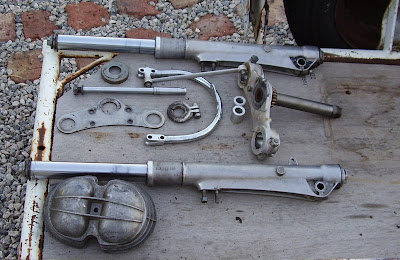 An Internet acquaintance was involved in a hit and run accident a few days back and wiped out the front end on his 1971 /5. He luckily came out with no injuries, thanks to proper protective gear. I happen to have a 1971 front end (which I was keeping as a spare) and decided to sell it to him if he needs it. Most of my day was spent disassembling the front end and inspecting the parts. They appear to be in good condition and with seals / clean up they should be fine. The upper portion of the springs were rusted on one side. Upon draining the fork oil I found that the oil was very clean and the rust must have been a result of condensation in the housings. I've compiled so many spare parts over the years that it has gotten out of hand. I've run out of space to store everything. I'll probably regret selling off so many of my spare parts but oh well....If I need something I'll just have to hunt it down.