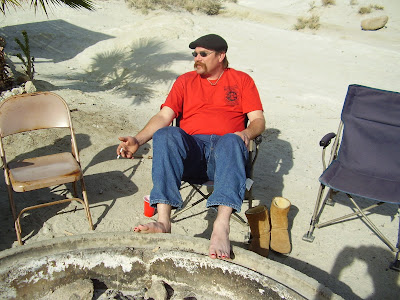 Scott, drying his newly painted toe nails by the fire. It takes a good 30 minutes to properly dry your polish. ( for those who are wondering / planning) His choice of colors matches his shirt. He is one of a few members of an obscure historical fraternity who were present. We had many planned events this year ...1) eating ...2) drinking .........3) drinking ...4)sleeping.....did I mention drinking? and of course the hot springs pool and the 2 night moonlight trail night hike. Darian and I decided to forgo the Moonlight Hikes this year as I would prefer to break my ankle in the daylight. 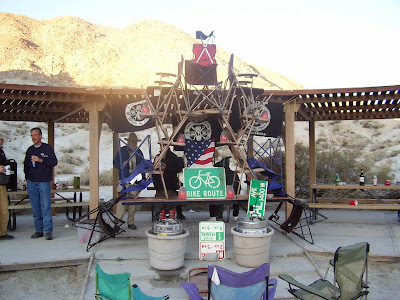 This morning a very curious site greeted us upon awakening. Somewhat like a crop circle, these chairs somehow managed to create a sculpture in the night. One poor guys chair was near the top so his departure was delayed. 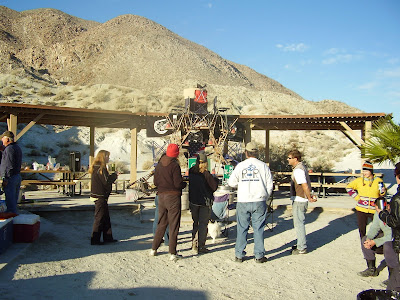 A crowd gathered and gazed with amazement at the well designed geometrical structure. What strange creatures would do such a thing in the depth of the night.............We'll never know. 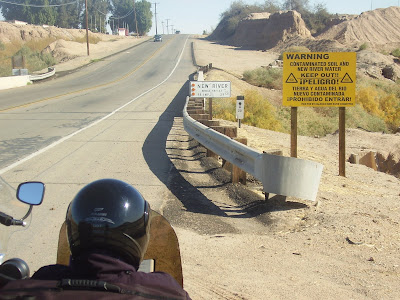 Upon departing the area near Mexico I just had to visit a well known local tourist attraction. In the recent past the "New River " has graciously been awarded as the most heavily polluted river in the country. It features Hepatitis, Typhoid, Amoebic Dysentery, E-Coli to name a few. Border Patrol folks who enter the lovely waters are considered heroes ( as they are transported to decontamination) no matter what they are going into the water for. Numerous Mexican industrial sites are just upstream. It is awfully nice of the Mexican people to import these treasures to our country. Illegals have been known to swim into big white blobs of industrial goodies and float into the country concealed in the white masses. We had hoped to take a dip just to say we have but our time was short so we had to pass. Maybe next time through.....