Got back to Yuma Friday afternoon. Did a few chores around the place. Finished pulling weeds and then we installed new clothes line wire on our clothes line. Darian is doing laundry as usual. Took a few short rides with the side car around the neighborhood. Was going to mount the Luftmeister Side tank today but decided against it. Already have enough weight on the rig and haven't been able to find a replacement fuel cap for it. I went ahead and listed the tank on EBay so we'll see if I can retrieve my costs. 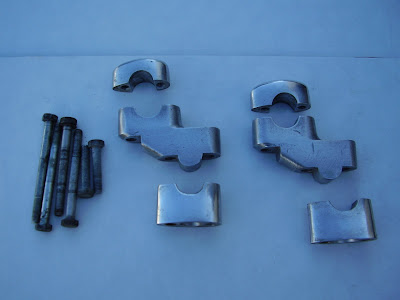 I received a pair of BMW "Bar Backs" for the R75 via EBay but unfortunately they interfere with the R75/5 steering damper control so I won't be able to use them. I cleaned up a pair of stock BMW handle bar mounts to include in the sale. I see someone else listed the exact same bar backs this morning so decided to add the stock clamps with the listing. I also had an old R75/5 tool pouch which has been laying around for years so listed it also.
I've continued my "Craigslist" fishing expeditions in Yuma and Las Vegas for the past few months. Yesterday I got a call from a former Montanan who saw my "wanted" ad. He has a crashed 1972 BMW R75/5 Toaster for sale that has been in his shed for years. He purchased it years ago with the intention to restore it. Ends up that the restoration costs outweigh the value of the bike so he decided to sell it after seeing my ad. Not sure what all is there but the price is very right. I'll be back to Las Vegas soon so I'll pick it up and drag it back to Yuma. That will give me another project bike to either repair or part out. I'll probably part it out. One cylinder was permanently damaged when the bike went down. He said he had two fuel tanks and a lot of misc. stuff for the bike so we'll see what we end up with. My fishing trips seem to pay off if I keep at them. Just takes patience and persistance.
Posted by BMW HACKER at 1:29 PM