We made it to Yuma this afternoon, fortunately missing all the treacherous icy roads which were only about 2 hours behind us on our trip South.
I found a front /  rear BMW R75/5 wheel for my "soon to be" new 1971 R75/5 Project.
Watched on EBay for a while and bid on / purchased the pair for under $150.00.
I'm excited to pick up the R75/5. Was planning on getting the bike after the first of the year but we'll be back in MT. for Christmas so want to have the title when we return so I can get the bike licensed. I'll be contacting the seller soon and hope to pick up the bike in the next couple of weeks. Now that I have a pair of wheels coming, I can install them and haul it on my little trailer. I have a pair of tires I can mount on the rims. 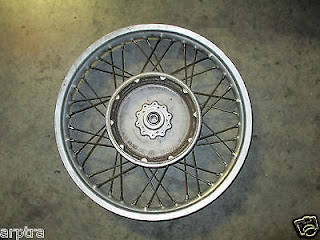 The seller of the R75/5 had already purchased a pair of /5 wheels a few years ago, but one of them had bad wheel bearings and he was not happy with them. He was going to purchase new rims / spoke sets and have new wheels built to the tune of $800.00 or so. I think these wheels I've bought will fill the order, although they likely won't be "show quality" but I don't really care about that....as long as they are functional. 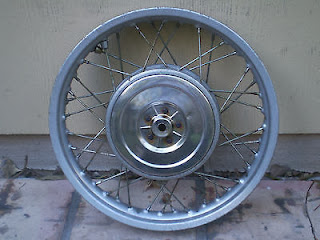 I also ordered a set of pushrod tube seals for the sidecar rig, so will be installing them as soon as I receive them. I attempted to get seals in Las Vegas when passing through yesterday, but the BMW Motorcycle dealer there did not have them on hand. Strange that the BMW dealer doesn't stock any older parts. I ended up ordering them from the Escondido Ca. dealership. Suprisingly, the Parts Counterman did not know what a BMW Airhead push rod tube seal was.....I guess the requirements for becoming a BMW Motorcycle "Parts Man" doesn't require having any knowledge of fairly common BMW motorcycle parts. Unbelievable to me....The R75 will require some assembly and a good looking over before putting it back onto the road.

I also will be removing the aftermarket "Jardine" headers from my Honda GL 1000 Goldwing and replacing them with a stock set of headers / muffler. I acquired an original set, and a local friend here also has a set he has offered me in trade for my "Jardine's". I'll have to look at his "perfect" set prior to agreeing to a swap. The "Jardine" setup sells for over $500.00 new....and mine look "as new". The Honda OEM set I have is a little rough, and he claims his set is in "perfect" condition...we'll see.
Below is a similar OEM "Horseshoe" Honda GL 1000 muffler.

I'll also be checking out the running gear on the 1988 BMW R100 Mono I picked up in New Mexico. I want to get the engine running and run the bike a few miles to check out the engine and transmission. Either I will spend some effort and sell the bike as a "runner" or part the thing out. I'm undecided on which route to take. The engine / transmission would be a fine "spare" for the sidecar rig....but on the other hand, the bike would bring well over $2000.00 in parts sales. As a running bike, I might get $1200.00 - $1500.00 if I put some work and a few bucks into it.
I was looking for another small bike project, but my list is already pretty long so probably good I didn't pick up anything else. I found this old Honda 400cc "Hawk" for $250.00 but didn't get to look at it before leaving MT.......I'll check it out in the Spring if it is still available. 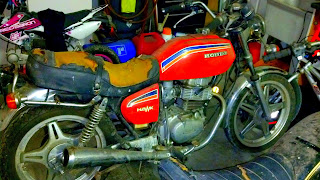 Many people have suggested that I need to look for a spare transmission for the sidecar rig. Are they that fragile or just hard to find?

Greetings Richard.
I'm running a 1974 R90/6 kick start 5-speed transmission behind my R100S engine. The 1974 transmissions were supposedly very weak. Mine has worked fine under heavy use for the past 3 years without a problem. I have a similar spare 1974 transmission and also a spare 4 speed transmission. So far I haven't needed either. The 4 speed is a more robust transmission but I really like the 5 speed as the lower gear ratio spreads are better suited for the sidecar.... 5th. gear is almost like an "overdrive" at higher speeds. I am keeping the spare transmissions "just in case".