Spent a few hours and checked out the  R100 Mono today.
Pulled the airbox.... Found that the rodents only got into the upper filter area and not into the carb intake areas.  Even so, it appeared that their time there was short as debris found was minimal. I removed the fuel tank and rigged a small syringe for temporary fuel supply. I removed the spark plugs and peered into the cylinders with a light. All looked good. Put the transmission in high gear and the engine turned over smoothly with a turn of the wheel. 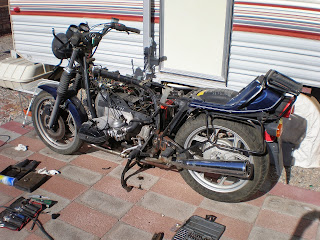 I have a spare AGM battery so I installed it. Looking at the wiring mess under the tank, I feared there might be issues with the wiring. Hooking the ground wire last, caused no "sparking" so all appeared OK. A shot of ether with choke application and the engine fired right up. Amazingly, it idled perfectly after a minute of run time. Had a little smoke for a few minutes but it cleared up real quickly.
I removed / cleaned the fuel taps, flushed a little gas through the tank and re-installed it. I took the bike around the block a couple times to be sure the transmission functioned. All systems appear to be a "go".
Oil light functioned, as did the generator / neutral light. 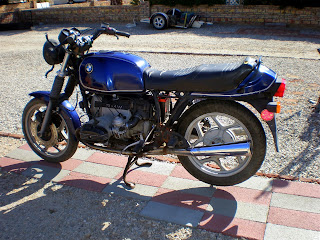 I removed the broken saddle bag mounts and the rear trunk bracket. I'll likely sell the saddle bags separately. Also pulled the "Brown" manufactured side stand as I may need it for my "new" R75/5, which I plan on picking up in San Diego sometime next week.
After a little thought, I decided to list the bike on Craigslist to see if anyone would be interested. I did a quick wipe down and took a few photos.

If the bike doesn't get near my asking price ($1350.00...which is on the high side), I'll tear it down and start parting it out. I might keep the engine & transmission for spares if ever needed. We'll see what comes from the C'list ad.
I also visited a friend today who acquired an early GL1000 Honda earlier this year. The bike has a nice OEM Honda GL 1000 exhaust system. He wanted my after market Jardine headers / mufflers for his bike so we agreed on a "swap".  I'll give the system a fresh coat of  flat black "heat paint" tomorrow and install the system. I'm curious how much quieter the engine will sound.(?).
Also have new push rod tube seals coming for the sidecar bike so that will get going upon the receipt of the parts.