Spent a few hours yesterday installing an OEM Honda exhaust system on the Gold Wing. I had acquired an exhaust system in New Mexico a couple months ago, but a friend here in Yuma also had one. I offered him my Jardine Headers / mufflers in exchange for the stock system. Done deal.
I wire brushed / cleaned the headers / muffler then gave them a new coat of  flat black Heat Paint. Installing the system was a little tricky but with the help of my lovely Wife I was able to get everything into place. The "new" muffler had sustained some damage I didn't initially see, but nothing too terrible. I installed the chrome covers I already had as mine were better than the others. I also had a set of chrome header covers, but decided not to use them.
The replacement OEM system probably adds 20 lbs. to the bike as the headers are cast iron, and the "horse shoe" muffler is quite heavy. 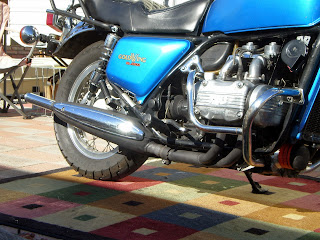 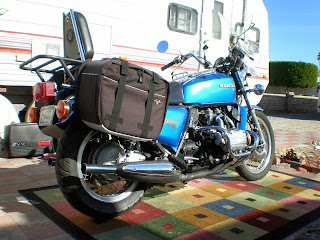 I love the more subdued sound of the stock exhaust system. Must be a sign of age as at one time I loved the roar of an engine....these days I prefer to be more "under the radar" when it comes to decibels.
Plus I like the unique look of the stock system.
I'm still "sporting" the old school backrest I installed last Spring to take my Wife for a ride. 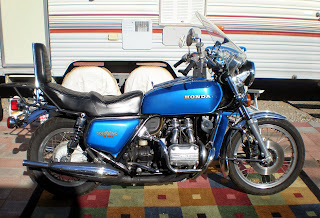 A couple of years ago I bought a new "Air Cut-off" valve as I thought it might be bad. I had removed the old one and found nothing wrong, but ordered a new one anyway. I decided today to install the new one. Upon removal of the existing assembly, I found that a small (obscurely placed) o-ring was missing, which would have caused a constant vacuum minor leak. I only realized it was missing when I opened the new kit and found three o-rings, when I was only expecting 2 o-rings.
Also found a broken piece of plastic on the top of one of the carbs....in the top cover above the slide.
The plastic appeared to be old and fractured. I fashioned a piece of rubber plug and affixed / sealed it to replace the broken piece. Removing the slide top would have meant removing the entire carb. assembly, which I was not prepared to do today. The white plastic piece is permanently affixed and is not a replacement part. I'd need to replace the entire cover assembly section to properly repair it. My repair will likely last indefinitely. 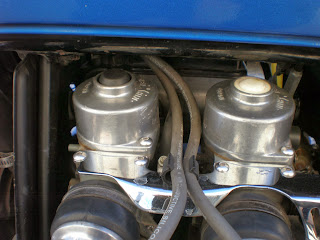 The culprit carb top after repair.
Also picked up some oil / filter and performed an oil change. Was at 2700 miles since last Winters service so it was due. 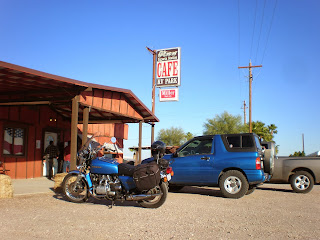 After these repairs I decided to run up over the Telegraph Pass to Lagurta Station, a local watering hole between Yuma and Wellton AZ. Stopped for one quick "cold one" and visited with one of the locals for a while.
Cannot believe how quiet the bike now is. It seemed to run a lot better and no longer am experiencing the intermittent "huff" through the exhaust system.
Not sure which repair made the differences but between the small faults found / fixed and the replaced exhaust system the bike seems to be running better. The minor vacuum leak would have caused issues. The idle increased about 700 RPM after the repairs, so I idled it back down to where it should be.
I am a BMW motorcycle fanatic but the old GL 1000 Gold Wing is one of the most pleasant highway machines I've ever owned.

I know several riders that love the older Honda Gold Wings. And most of them look and sound completely stock. They make my airhead sound noisy...