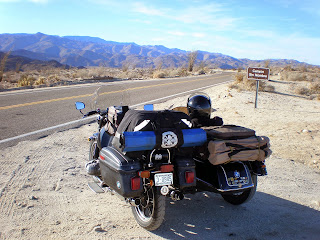 The closing of another year brings us once again to the "Airhead Beemers Club" Last Chance Rendezvous in the Anza-Borrego Desert.
This years gathering brought about 70 - 80 some odd souls to the group camping site @ Agua Caliente
County Park. 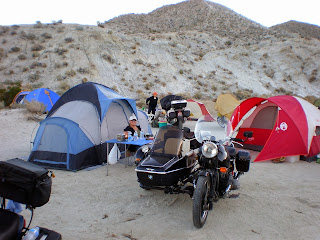 It was great to see some of our old friends and some new ones. We've been coming to this event for nearly 20 years over the New Years Holidays. We missed the first year and one gathering a few years back when Family issues had to take priority.
We spent the Christmas Holiday in Montana  with Family, then flew back to Las Vegas NV. on Thursday. Arrived home in AZ. at 10:00 PM Thursday night so had to pack up in a hurry on Friday AM before heading to the desert. We still managed to arrive with plenty of day light remaining to get our campsite set up. 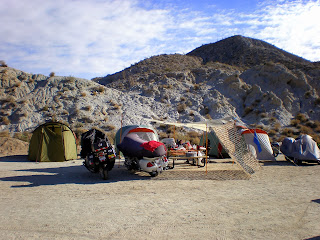 These folks always have a nice shady set up....they pull trailers with their bikes so lots of extras can come along.
The weather was beautiful with zero wind and lots of sun. Saturday AM was a bit over cast but soon the sun was out. Temps were in the low 70's.
Lots of beverages available and great food was served as always. 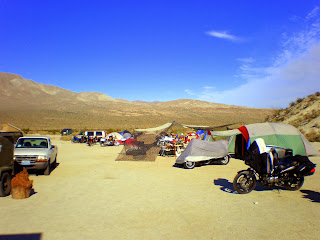 One of the guys hauled in a comfy old couch for additional campfire seating.....unfortunately it found its' way into the camp fire on Saturday Night....it momentarily lit up the entire valley as it was consumed....of course this brought the attention of a Park Ranger who paid us a visit fairly quickly....
Over the past year, the Park removed some camp sites and built small cabins which are available to rent.
(in the back ground) Late Saturday afternoon a Big Horn Sheep was spotted high on the ridge above us. 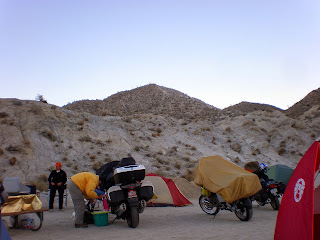 Binoculars came out and soon at least 5 sheep were counted. (thanks for the photo Steve) 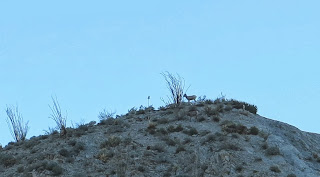 Where have the years gone? Seems like just yesterday we started attending these gatherings. Now, nearly 20 years later, the majority of attendees are in their 50's - 60's. Sadly not many younger "new" folks are joining the festivities. A few of us laughed at what the future might bring. More and more, 4 wheeled contraptions are a method of transportation to the motorcycle rally......Such is life.....
Posted by BMW HACKER at 10:39 PM