Finally had a bit of "free" time so decided to get a start on the R75/5.
I removed the parts I had installed for transport....the tank, seat, rear luggage rack, mufflers.
She had about 10+ years of dust and dirt build up. anything that had oil / grease on it had grime stuck to it. 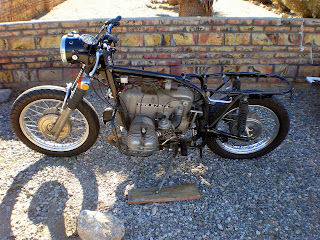 I bought a can of hardware store Engine Degreaser which easily removed the small amount of crud which was present. Didn't want to "high pressure" wash the thing as it wasn't that bad. Used a stiff nylon brush and scrubbed where needed. Some grime around the push rod tube seals was tough to get to so a bit remained. 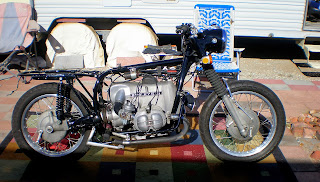 I spent about an hour wiping down the frame and all parts accessible. The frame has its' share of scratches and marks from normal use....maybe I'll get some touch up paint to cover some of them to prevent any rust. 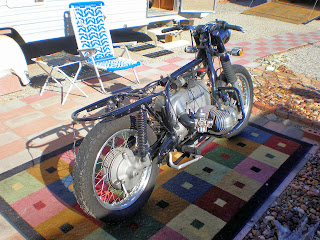 The PO detailed the frame very well, but I did see a couple spots where the frame paint was a little thin, with a very slight hint of primer showing. There are only a couple spots which won't be visible when the bike is assembled.  Over all the bare bones bike looks real good and clean. 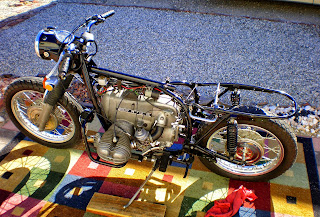 The "QSL Solo Seat" had  spacers in place which raised the seat at least one inch. I didn't like the height so removed the spacers and replaced the bolts. That lowered the seat a bit which allows me to sit flat footed on the bike. Not sure if I'm going to like the "Euro" low bars. My neck may not fair well bent over with a helmet on....we'll have to wait and see.
I'll be working day to day on the bike and should have it together and on the road in a week or two, barring any issues. It has a "silicone" oil pan gasket which appears to be leaking. I'll need to order a new papaer type pan gasket for sure. doesn't look like the newer silicone gasket is very good.
I will re assemble the bike and retain its' "patina" as it is. No repaints or polishing planned.
Posted by BMW HACKER at 3:38 PM

That looks really clean! When did BMW stop putting kick starters on?

nice job cleaning the beemer up!