Every time I turn around it seems that new tires are in need. When I tell my wife I've ordered new rubber she, without fail, says " But gee you just bought new tires....." the miles go by and the tires wear out. And I'm finding that time does go by a little faster as we age.
I've been a Dunlop Tire fan for years. They are a reasonably priced tire and are sticky, not like some of the rock hard real cheap tires. The super cheapo's wear forever but I felt like I was riding on marbles all the time. I haven't bought a super cheapo for 20 years. Damn Dunlop Tires have increased in price about 40% since I bought one last summer. Since I'm now a three - wheel rider the tire "stickiness" is not as big an issue. I found Bridgestone tires for about 40% cheaper than the Dunlops. I have been dealing with an Internet wholesale joint called "Tires Unlimited". So far they have been great and send the tires to where ever I may be. My tires , two of them anyway, arrived in a week. They shorted me one tire. I called the sales guy and he said the warehouse guys can only count to "two". My third tire is on the way.....Upon receiving the Bridgestones I think they are pretty comparable to the Dunlops.
Tonight was a rare, wind free night, so I decided to mount the new rear tire and throw on a higher geared final drive. I have been running a 32:9 final drive (thanks Stoner) for the past year. Have found that it is just too low. I ran a 32:10 with the 750cc engine, but when I upped it to 900cc I went to the 32:9. The 32:10 was too high for the under powered 750cc. I found an E-Bay 37:11 final drive a few weeks ago. Splines look like new. The nice seller even shipped it full of oil. What a frikkin mess! oil soaked box, packing and brake shoes. I can't believe the post office even accepted it. My over - sized P.O.Box smelled like a Master Lube. Of course I'm in Texas where everything smells like oil, so no one noticed. In any event I mounted the new tire & tube tonight and installed the 37:11 Final Drive. One of the damn mounting studs was bent somehow so had to rob a stud from my old one. How someone could bend one of them is beyond me. The wind never blew until the "Red BMW" grease for the drive splines came out. Lots of nice red dust around here. Had to hurry up and stick the wheel on......The gearing feels dead on now. Gained about 10 mph at 4000 rpm. A tad bit high geared for starting out but not too bad. The 900cc torque is substantially better than the 750cc. 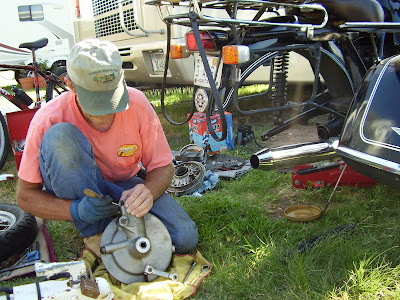 Being homeless / shop less, I spend a lot of time working in the dirt. Luckily I have grass here. That way, when you drop a nut or washer, you get a nice break while you crawl around with your nose in the grass searching. It's funny how something can drop straight down and it ends up 2 feet away.....My wife always looks at my "working on the bike ,on my knee" posture and comments " How can you sit like that? That's not normal!" Well I never claimed to be normal. If I was normal, I wouldn't be performing delicate mechanical tasks in the dirt. 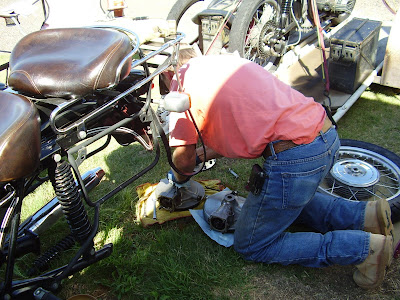 The previous owner of this final drive slobbered about half a tube of silicon when he installed the gasket. Took about 30 minutes to clean all the weird looking gray crap off the studs / ends. Final drive went on.....fresh BMW gear lube went in......and off for a test ride......stop and adjust brake.......Gearing is just what I hoped for!
Elapsed time: 30 minutes to change out tire; 30 minutes to scrape off the weird grey ancient silicon; 30 minutes searching for things I couldn't find, but I knew I had; a couple of minutes attempting to install the final drive with the bent stud; a few minutes to realize the stud was bent and change it; a few minutes with my nose in the grass, looking for the washer I dropped; a few more minutes to remove the gear lube soaked brake shoes and replace with my old, better ones. 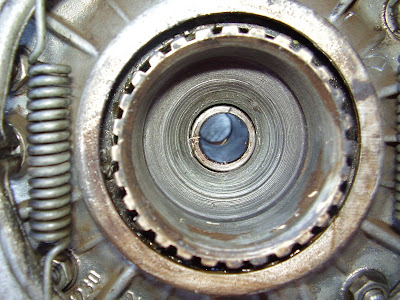 This is the removed 32:9 final drive from Stoner. I racked about 7000 (over loaded) sidecar miles on it and it shows no wear to speak of.
Some former owner spent a whole bunch of time polishing the 32:9 final drive case. I would never spend my time doing that when I could be crawling around on my knees, searching for the lost items in the grass. 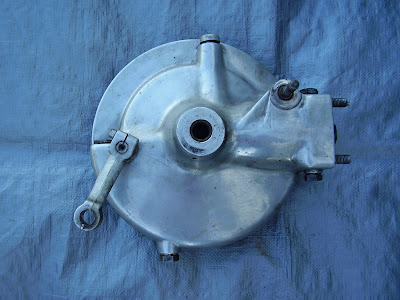