The area of Texas we are in is prone to some pretty nasty storms. most residents have storm shelters in their back yards and a lot of homes are constructed of brick. Late today we had quire an ugly looking thunderstorm heading our way. I went out to photograph the on-coming storm. 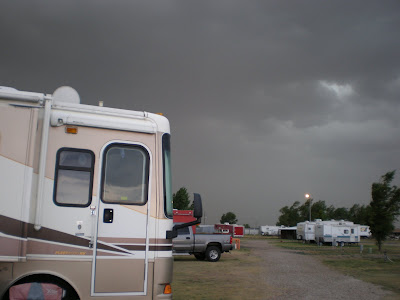 There were some big lightning hits fairly close so I didn't wander far. I could see the clouds moving fast and all of a sudden a ferocious blast of wind hit. I heard a terrible metal to metal sound but couldn't figure out what it was. I looked over towards my neighbors R.V. and saw that his portable shelter, which he uses as a motorcycle garage was in pieces. I ran into our motor home as the wind and noise were not normal. I thought for a moment that a tornado was about to nail us. 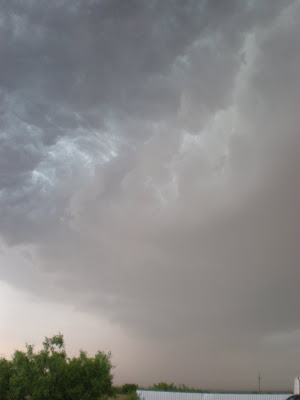 The storm blew very hard for a half hour or so with heavy rain and limited visibility. No hail this time. Luckily we had other R.V.'s acting as a wind break next to us. After the storm passed a co-worker called and said to walk over a few feet and look at the storage building right next to her R.V 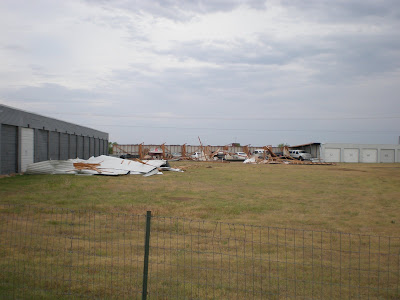 WOW, this explained the strange metallic noises I was hearing. The pile in the fore ground is a huge tangled section of the buildings roof. Another 100' and it would have been in the R.V. Park. 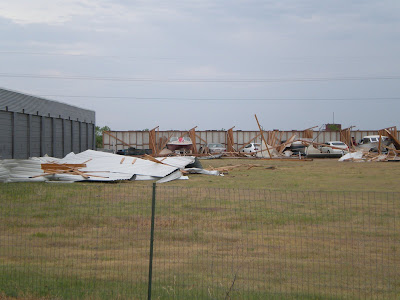 A lot of busted up vehicles in there. Looks like we dodged another bullet.