Finally finished messing around with this fuel tank. Had the new knee pads laying around for 4 months and got them stuck on. I used some 3M adhesive which I'm not sure how well it will work...we'll see. I replaced the fuel cap gasket. Had to drill out the old rivet to install the new gasket. It came with a new rivet. 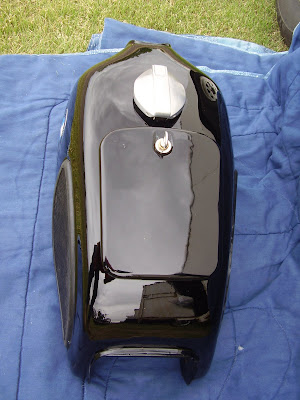 The tank looks pretty good although I see some blemishes on it and it hasn't even been on a bike yet. Storage is tough on things. It will eventually live on the R100S bike. The tank is not perfect by any means. I can see a few imperfections in it now that the paint is new.
I have another 6.2 gallon tank in the paint shop right now. It will likely become E-Bay fodder. Was going to buy new knee pads , BMW roundels, fuel cap etc. but the price will grow to more than it is worth. 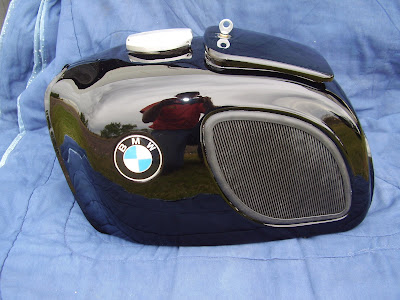 The old spare QSL 1000 Mile Solo Seat is sporting new clothes now. It was white with tape and a lot of holes in it. I found a local (very grumpy, almost nasty) older fellow with a lifetime of upholstery work under his belt. He did a very nice job, covered the bottom of the seat with a carpet type matting and even painted the seat mounting frame. $100.00 total. He replaced the old foam as it was rotten from exposure. 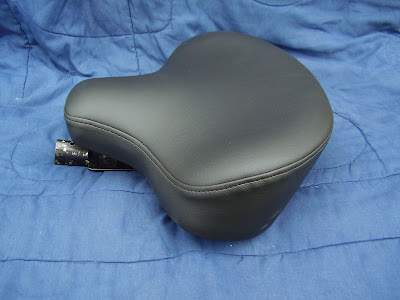 The R100s cylinders have been soaking in Marvel oil for the past 10 days in an attempt to free up the pistons. The right side was on top dead center so the valves were closed. No problem holding oil there. The left side had an open valve so I found some sealable caps to close off the ports to retain the oil. Pulled the plugs and filled her to the top. So far the rust is winning. Don't know if Marvel oil is the answer or not. I'll give it a bit more time then may have to go to a special rust eater of some sort. Don't want to ruin the pistons...if they're salvageable.(?) I have a spare complete R90 motor (needing top end work too) but was hoping to bring the 1000cc guy back to life. Time will tell.......Who was it that said (either Neil Young? , Stephan Stills? or Graham Nash?) "Rust never sleeps". 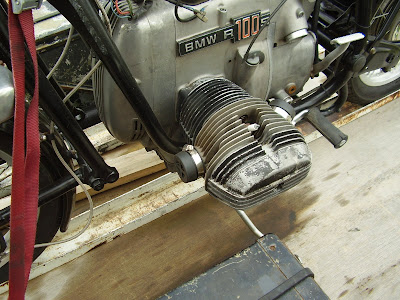