Did a bit of scrounging at the local motorcycle salvage yard and found an "as-new" heavy duty shock absorber ($25.00) for the side car. The one in place was shot and acting like a pogo stick. I intended to install a motorcycle air shock but the salvage yard ones available all looked like leakers....plus they were pretty large and would not clear the tight mounting areas. Also picked up an old Hodaka tool tin and some new in line fuel filters.
The shock fit well after a little modification of the lower mount. The spring is under minor compression with the chair unloaded so took some effort to install. Took it for a spin yesterday and she rides much better. 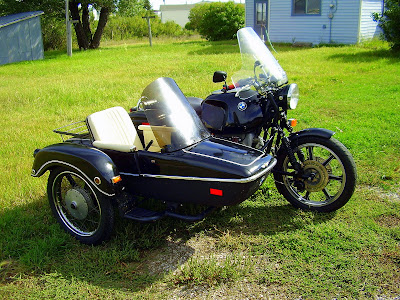 I had one Henry's floor board mounted on the left but the side car mounting sub frame would not allow conventional mounting on the right side. Finally came up with a pair of BMW clamps in my parts bins which fit perfectly on the side car frame. I was going to weld a bracket on the frame but the clamps worked great. 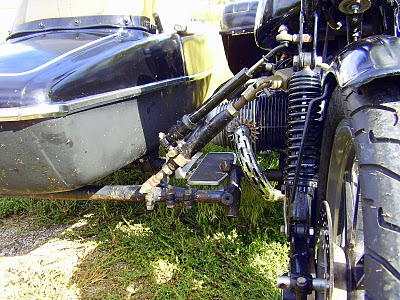 The temperature was in the low 40's yesterday and the bike still started miserably....not sure where the problem lies. She just doesn't like cold starts! Must be a choke circuit issue some where. 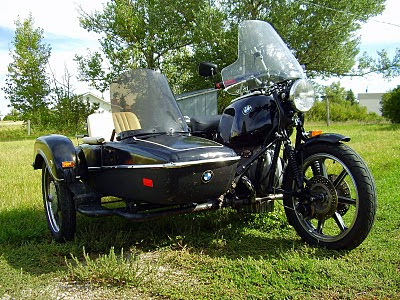 Mounted the small Hodaka vintage tool bin right behind the luggage rack. I'll store some additional parts / tools there. I don't really like the chrome though....might have to spray paint it black.... 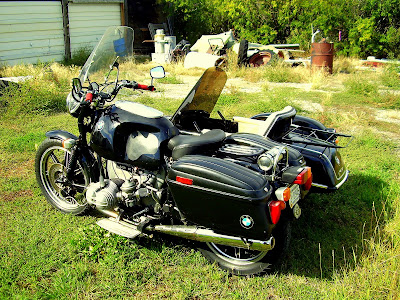 I remounted the Heinrich tank & black QSL seat. This time I made some rubber cushions and fitted them around the ignition coils under the tank. The right coil was rubbing against the inside of the tank. The tank seems to clear the brake master cylinder just fine. The fuel consumption with the 1000 cc engine makes the bigger tank a must. I swapped out some BMW OEM hand grips and installed some side reflectors which I hadn't got around to installing.
Posted by BMW HACKER at 9:59 AM