We'd been planning a drive over to Hughsville, which was an old mining town. Hughsville was developed during the late 1800's, dying off and coming back to life during WW2. Shortly there after the area shut down. There are still some residents there today.


The hay crop this year is huge. The Little Belt Mountains in the back ground. 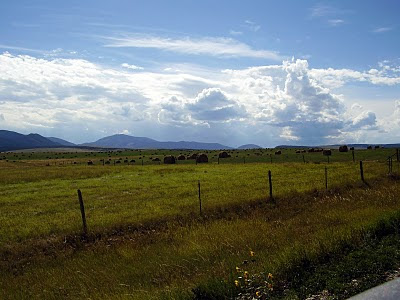 Square Butte to the north. 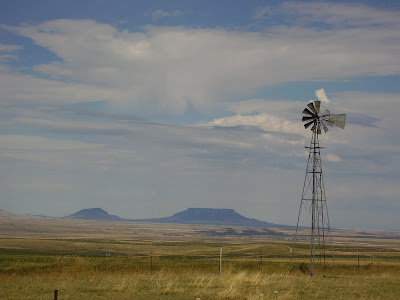 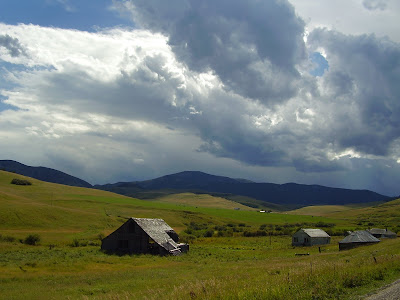 A big rattlesnake...someone finished him off with a 9mm and removed his rattles. 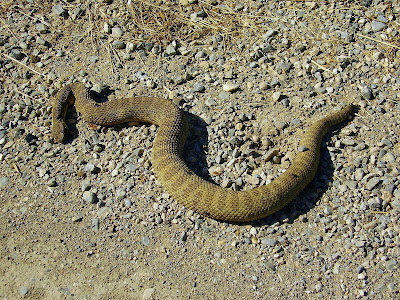 This place was large in its' time. 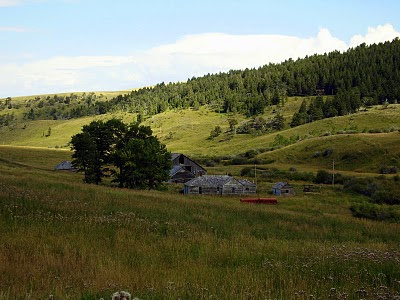 The "road" towards Hughsville from the North is signed as "unimproved'. This turned out to be an understatement. Climbing higher and higher the road became very narrow and boulder strewn. Some spots in the trees were so narrow I had to pull in the truck mirrors. The road started to switch back up and eventually was about 8' wide and was only a notch cut in the mountainside. Darian, riding as a passenger was on the outside edge. The right tires had only a few inches to the edge. The last steep section was loose rock and about a 1000' drop into the canyon. My adrenalin was going for a while.
Finally made it to the top and commented that I would not want to be here in the rain. 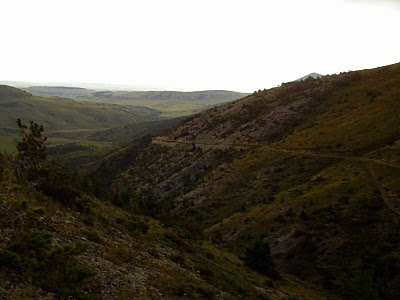 Over the top of the mountain and we headed down. approaching a washout I mis-judged my route and we slid into a very big hole, high centering the truck. 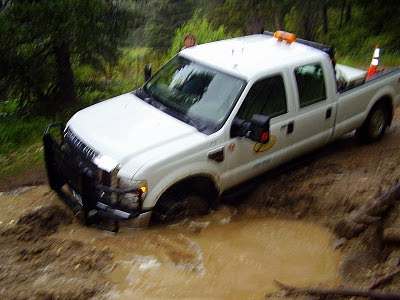 The weight of the truck was on the running board and the frame. Not going anywhere....
Luckily I had purchased some chains and two come-a-longs yesterday for work. I shoveled around under the running board and then the rain came...
It poured rain for nearly an hour with sleet and a lot of lightning. The lightning was very close so we sat in the truck hoping the storm would pass. Came to the conclusion that we might be spending the night in the truck. 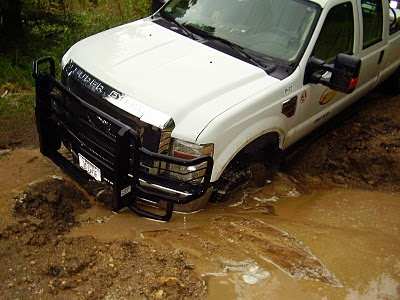 An hour later the storm subsided and I started rigging chains up to the closest tree...about 75' away. Using the two come-a -longs we drug the truck back 10 - 12 feet, at 1/2" at a time. Took both of us to pull the winch handle with the white behemouth on the other end....
The right rear tire was nearly off the ground. 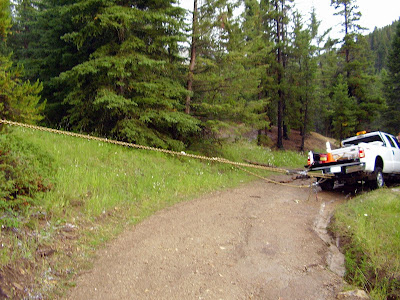 Luckily that tree was right where it needed to be....and I had enough chain. 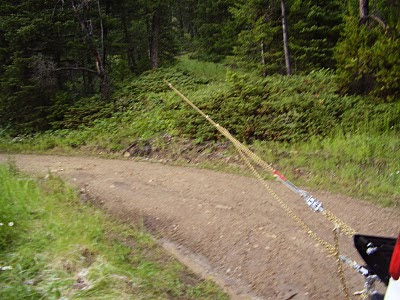 Took us about 1 1/2 hours to drag the truck out of the hole...then we had to carefully plan on how to get around it...no way were we going back the way we came in after the pouring rain. Road down the mountain would have been too dangerous.
Finally figured a way around the 'Pit' and gassed it through...the aftermath below.... 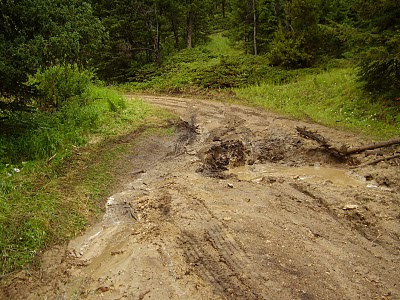 A mile or so down the mountain we entered Hughsville... 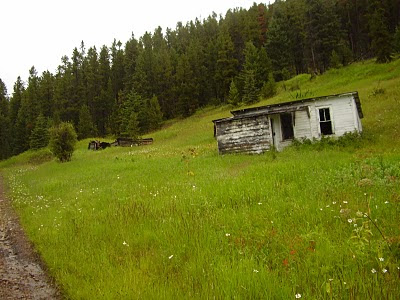 A lot of structures ready to fall in on themselves... 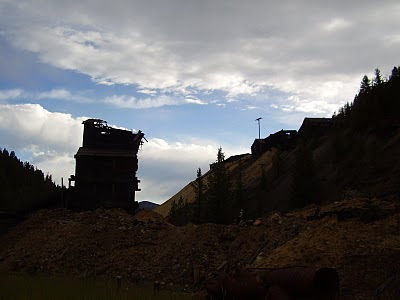 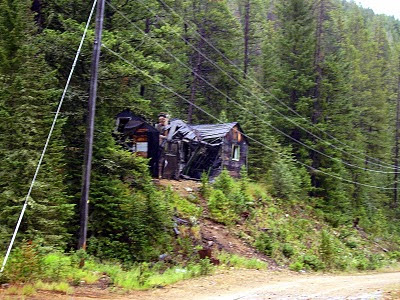 Quite the operation here...ore was hauled by a small gauge railway over to Monarch MT. 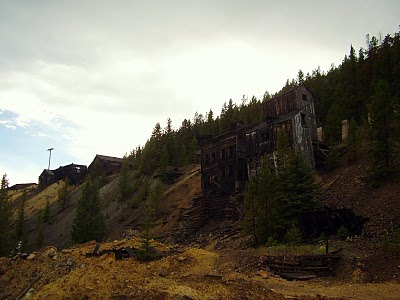 Collapsed building atop a tailing's pile. 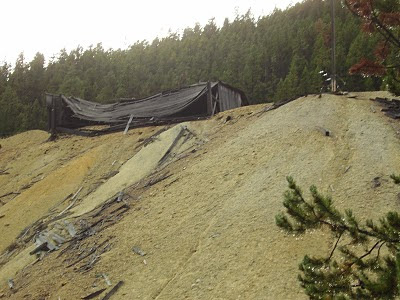 A number of old cabins about. 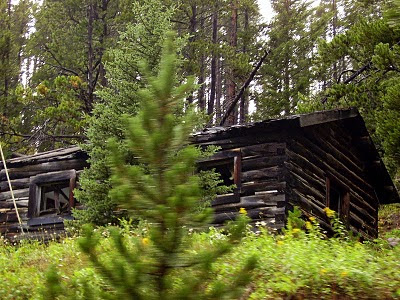 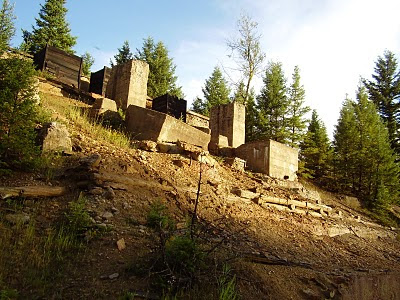 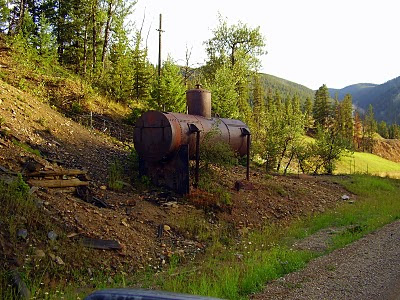 We finally made it to the highway...took us three hours to travel 30 miles....below is a view of the "Sluice Box" area....made it home safe and sound! 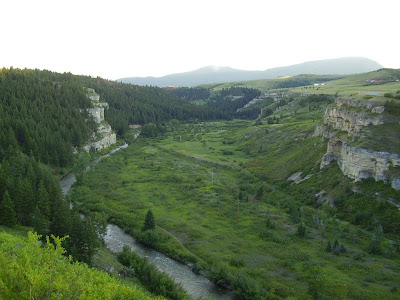 I won't be going back over that mountain again anytime soon.
Posted by BMW HACKER at 9:18 AM