Yesterday was a bit cool and windy, but a perfect day for a quick tour in the AZ, "boonies"...I wanted to test range again with the auxiliary fuel tanks I installed. I made sure all tanks were completely full. The auxiliary tanks run off one petcock. The bike stumbled at a mere 72 miles so I switched to the main tank. I made a stop at Dateland AZ and opened up the caps on both side tanks...finding fuel still visible in one of them above the "metal foil" in the tanks.....after sitting for a minute with the caps off, I could see the fuel level change, equalizing itself in the tanks. I got back on the freeway and ran another 35 miles before "drawing air" again. So I now know I can run a minimum of 100 additional miles with the side tanks, using approx. 2.5 gallons (at 40 mpg) of the tanks quantity. I might now drain the remaining fuel just to see how much is retained in the tanks. If my original "fill" quantities are correct, only a 1/4 to 1/2 a gallon would remain in the combined tanks.

Running 2 individual petcocks / isolating each tank might take care of the non-balancing fuel issue. It is also possible that the OEM fuel pump cannot draw the fuel up high enough as the tank levels drop down.(?)  Isolating each tank will require adding another petcock (which I have) and at least one more fuel line "T".  This set up will end up with a plethora of fuel lines so I think I'll leave "as is" for now. 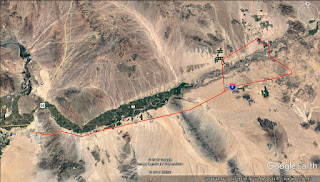 Got on I-8 and headed East to Dateland AZ  then another 20 miles East to exit
North towards  Hyder AZ. which was a WW2 Military Camp. (click on link) ....a Million Troops trained there according to the "link" info...

Crossed the "Gila River" which is dry most of the time...I suppose a major event will have it running water once a year or so... 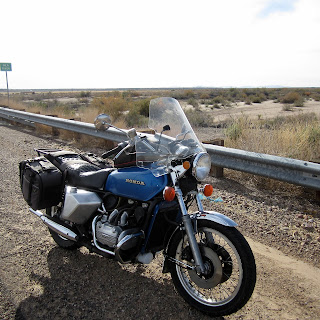 Took the old Agua Caliente Road. A local told me years ago that the Hot Springs Resort shut down in the 70's due to loss of the water source....seems that the onset of irrigation of surrounding farmlands upset the aquifer feeding the hot springs and the source gave out...leaving the hot springs dry... 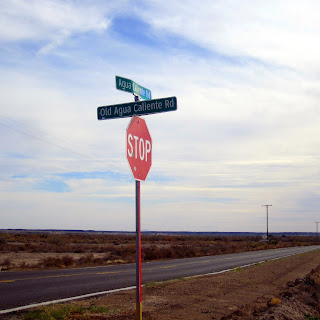 The location now sits boarded up and abandoned. So quiet here...not a sound to be heard. 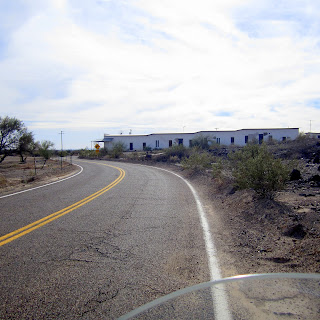 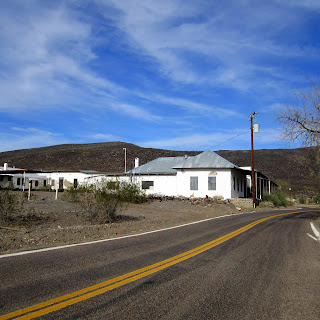 "Hyder Valley Supply" now out of business.....with the small local population I can't see how any business could survive. Judging from the thousands of empty beer bottles along the miles of road shoulders, bottled beer is a main staple of the locals....picking up the trash is not. 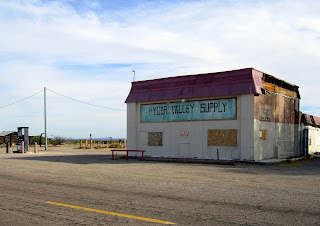 When heading back West, I got off the freeway at the "Mohawk Valley", following the frontage road for the final 60 miles. 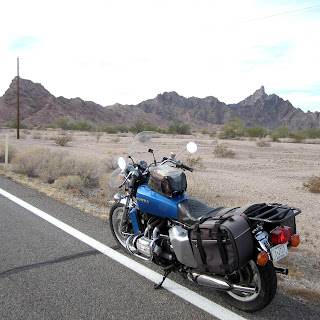 Ran across a group of Border Patrol Officers on a hill above an abandoned old gas station location. They had some sort of mobile tower erected, likely looking for illegal people / activities. Did not take a photo of them.
A nice day ride totaling 175 miles. Actually very pretty desert country. The bike worked flawlessly as usual. The Gold Wing likes to lope along at 65 - 75 mph and is happy there....I boosted it up to 90 mph a few times just for fun....Will likely need a new rear tire for next summers riding season as this one is getting a little thin.

Did you wave at the Border Patrol guys? :)

I've heard about those mobile towers. Face cell phone towers. Fake as in your call will drop or not go anywhere but your phone will connect to it and think it's genuine. Allowing them to see who you are and where you're at (direction only).


Whenever I head to the East or North I go through a Border Patrol Check Stations. I typically thank them for their service. The Check Station guys have a pretty boring job, interrupted by mostly arresting people passing through with weed in their cars. The Dog's noses seem to be pretty keen...lol

Being they are a "Federal Agency" they don't care if people have their "Medical Marijuana Cards"....equal treatment....just arrest everyone.