Took a quick ride up to Quartzsite last week to check out one of the local "Flea Markets". Also wanted to check the highway range of the auxiliary fuel tanks. Riding around town they ran out of fuel at 60 miles. I re-filled them and surprisingly they only took about 2 gallons total....my initial fill showed 2.8 gallons so I think the fuel pump meter was off at the gas station.
I ran to Quartzsite and hit "air" at 80 miles...haven't refilled the tanks yet. Either the tanks are not drawing fuel evenly or their capacity is around a gallon each. I could pull the fuel line off each tank and see if any fuel is remaining. If they are not drawing evenly, I could isolate each tank and add another petcock so each tank has its' own.

I routed the individual fuel tank vent lines up under the seat and they were open.....bought a couple of cheepo one way vent valves and installed them yesterday. /that should reduce any fumes or chances of leaks due to expansion....although I won't over fill the tanks.

I wandered around the largest Flea Market for an hour or so....found a nice set of Heyco, West German end wrenches for 5 bucks. Upon leaving the area, I spied a friend on a Ural Sidecar rig pulling into the Post Office. He and I have a way of crossing paths by chance quite often....this is the 3rd. time we've had this occurrence. I followed him out to his place for a quick visit and looked at his recent completed Gold Wing Project...an 1100 model he has redone....very nice bike and spotlessly clean. Also for sale....if I had room for a 4th. bike I would own it. 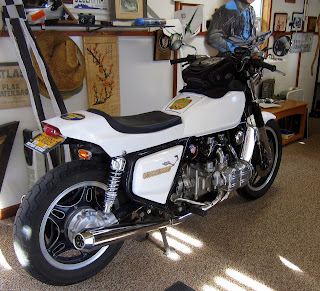 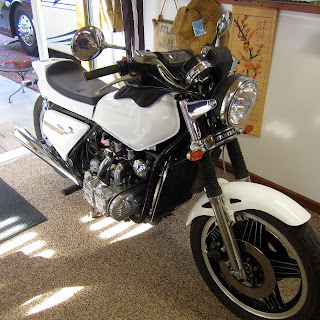 His "Adventure Rig Options" stir up some attention at the local Border Patrol Check Stations....lol 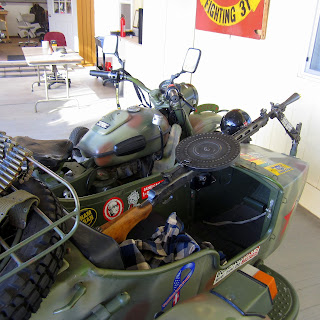 Took a break near Palo Verde at a Colorado River access point. 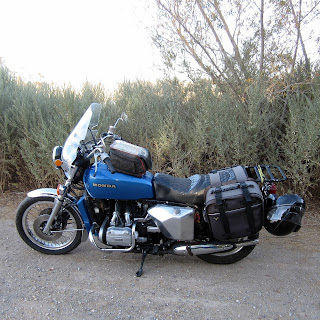 More like a lake here....a few folks were fishing. 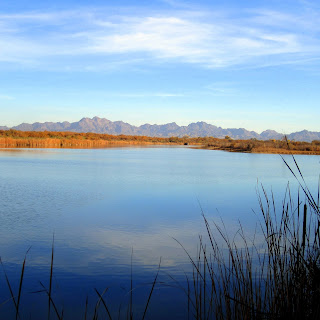 Worked my way down to Ogilby Road which then leads to I-8. The road is in rough shape. 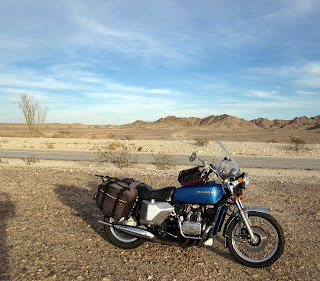 So I was able to make the 220 (or so) mile loop without adding fuel....should have 1.5 to 2 gallons left in the main tank. Safe range with the added tanks is now at 280 miles. I would normally have to fuel up at Quartzsite to make this loop.
Posted by BMW HACKER at 10:19 AM

Oh yeah, I bet that machine-gun replica gets the authorities attention!

Quartzsite....the mecca for RV owners apparently this time of year.