A few years ago I recall seeing a pair of Gold Wing Auxiliary Saddle Tanks listed on a site for $100.00. Decided to see if I could find a pair so listed a "wanted" ad on a goldwing site. I had a couple replies. One guy had a New set but wanted $450.00 + shipping which I thought was way high.
Another bike shop owner contacted me and had a used pair for $250.00 which I thought was a good price....not a "steal" by any means but a reasonable price. 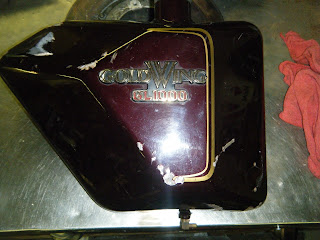 They are aluminum, so I'll probably strip them down to bare finish and install them without painting. I think they'll look pretty good with their raw finish. will "polish" them lightly.

I had a single BMW "Luftmeister" tank a few years ago, but was missing the threaded cap. They had an odd thread and never did find a cap that would work. The old BMW tank had a few coats of paint, plus an "epoxy" type base paint....the epoxy base paint was a nightmare to remove. Hopefully the paint on these is not the same stuff. I think the "raw" appearance looks fine: 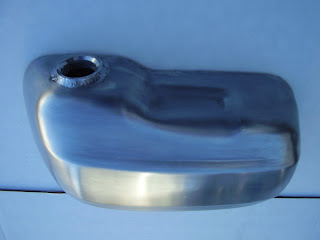 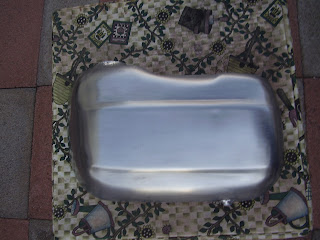 Fairly large tanks @ about 1 gallon each I was told. Not sure if I'll retain the emblems....we'll see how they look without. 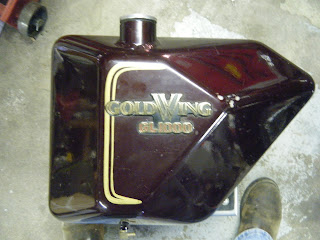 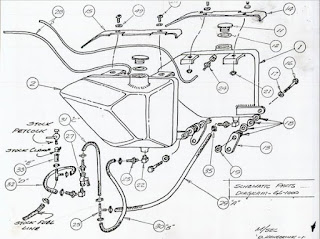 Nice find! I have an odd pair of the Luftmeister tanks that I haven't installed onto the Beemer yet. By odd, they don't have the vent line but simply a fuel line to run into a tee at the carb. Plus, a vented fuel cap. I'd only be able to install the left side as the sidecar subframe gets in the way.

I had a left side Luftmeister tank I was going to install on the sidecar years ago but would have had to remove the kick starter lever. Don't use the "kicker" often, but have had to a couple times when battery life was near its' end. I saw an "EML" rig at Death Valley and the guy had notched out a right side tank to clear the strut...looked pretty clean. The GoldWing has a pretty good range but 2 more gallons = 100 miles or so....plus they will always be worth what I paid for them (to someone) if I ever want to let them go. I'm just a "sucker" for "different" things....lol

I think I've seen pictures of that EML rig with the modded saddle tank. I'd like to get the range of the BMW with sidecar back up to over 200 miles.

Even with the 8 gallon Heinrich tank on mine I cannot quite(comfortably) hit the "200 mile mark". I sometimes tie a small 1.25 gallon can to the sidecar step....but don't really like carrying fuel in that way due to safety concerns with plastic cans....kind of like have a bomb attached to the rig. I'd be much more comfortable with a steel can. Found some surplus Euro military oil cans a while back...they were only $20.00 or so and held about a gallon. There is a huge Military Surplus Warehouse near Blackfoot Idaho. Need to stop there again one of these days.

Would you consider selling those GL1000 side tanks? Let me know. jdt3469@gmail.com