I'm always watching for "buys" on EBay.....searching Flea Markets for old misc. treasures.....keeping my eyes peeled for things I can resell at a profit if I don't want / need them.
I had a lead on a set of N.O.S. (new old stock) Henry's Floor Boards from an acquaintance a couple years ago but passed on them. Decided to buy them last Fall...the guy still had them. I was thinking of using them on my /5 but decided against it. Already have a set on my sidecar rig. Decided they needed to go to a new owner so off they went on EBay. Received a very good price for them.

This morning my neighbor said he spied a pair of old Motorcycle Saddle Bags at the local "Good Will" Store down the street. Asking $9.99 each. I hurried over there hoping to find a set of old Wixom Bags, but not to be. Ended up being old 50's Harley Bags. But for the "under $20.00" price I couldn't pass them up. 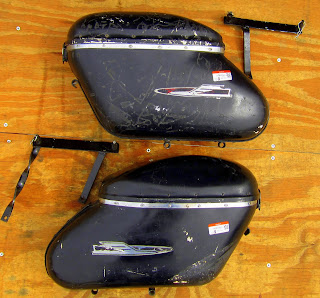 They've been painted a few times and have some old repairs but are actually pretty "sound". Will be a good project for refurbishment for someone. Only one used, similar condition pair on EBay right now...asking price @ $344.00. 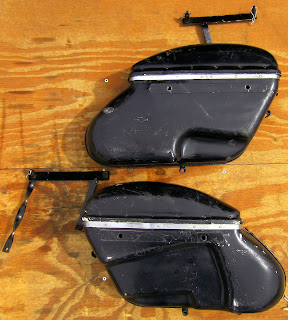 I held them up to my R75/5 to see what they look like. Actually looked pretty good but I would have to fabricate some proper mounts. A couple mounts were present but not all there. Surprised to see something like this at a Good Will Store...I guess you just never know what you might find. 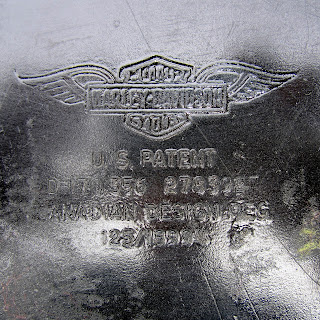 As far as "function", the saddle bags are too small for touring use and the lids are the type that would fly off if the front latch came loose. There were probably hundreds of these scattered around the shoulders of US highways in the 50's...lol
They'll eventually go on EBay.

I recently bought a lot of different vintage tools at Flea Markets around Yuma: Early Kawasaki "Meguro" tools, Toyota Tools and lots of Euro "DIN895" wrenches. Heyco, Hazet, Stubai, Dowidat are a few of the West German DIN Tool Manufacturers of the past / present. These Companies supplied most all European Automobile / Motorcycle Manufacturers with OEM Tools for their Tool Kits.
Funny that most Pawn Shops only hold higher prices on "Snap On"..."Craftsman" U.S made Tools when the value of the Western Euro Tools is also good. I now see a lot of "DIN knock-off" tools coming from China. The differences in quality is very apparent so no Chinese Tools are ever purchased.
I've cleaned out most every Pawn Shop in MT. buying these old wrenches. Typically pay from $.25 to $2.00 apiece for them. I sometimes offer single wrenches but usually will group up an assortment of "like Brand" tools and sell as a group on EBay.
Toyota Tool Group, purchase price $3.00...selling price $34.00: 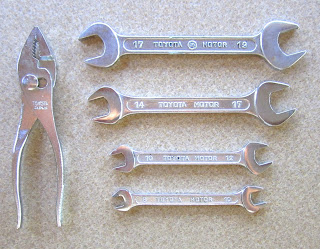 The Toyota Wrenches / Pliers are especially rare. I once bought a single large 21mm X 24mm Toyota Motors Wrench at a Flea Market for $1.00. I listed it on EBay and it sold for over $30.00. That sale got my attention to the collectible values of old tools. Another group of pristine old WW2 era Jeep "Williams" tools cost $5.00....sold for over $100.00 on EBay.

So this tool acquisition thing has become a hobby that makes me some $$.$$ and fattens up my Pay Pal Account for needed BMW Parts. The "nickel & dime" tool sales don't sound like much but I've probably sold well over $1000.00 worth in recent years, with a 500% (or more) profit margin. The buyers market is a bit small so I usually will only list tools every few months and don't constantly try to sell.
I try to keep a close watch on EBay for "new listings" as some bargains are often found there. Recently bought a nice alloy /5 fuel cap for $30.00, which is a good price. Typically sell for over $75.00. Found some very nice early /5 turn signals, with the side reflectors quite cheap. Some of these small parts I'm hanging onto for the present as the market value is constantly climbing higher. I saw a large /6 fuel tank on EBay this morning for $200.00. which is a very good price. Decided not to buy it and it sold minutes later. I try to be selective on purchases and let some go by if the timing for delivery is poor.

I had a very large selection of parts on Craigslist earlier this winter: 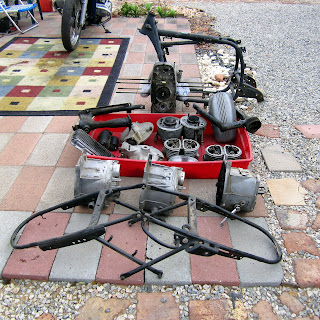 Had all these parts listed for the ridiculously low price of $250.00 just to get them out of here. Had a few "bites" and people were offering me less. That being said I had a change of heart and pulled the ad. Having a spare complete BMW engine / transmissions / final drives sitting around is not a bad idea. I have other spare drive train parts also, these were the ones in less than perfect condition.
I did give three BMW main frames away (one with  a Title) for free.  Did not have room to store them and no takers at $50.00 for all. Have a quite large selection of spares for future use if needed.

My "Holy Grail" of Searching / Picking is to find a "Hella Spotlight Mirror". These are very rare but I know there is one out there somewhere, waiting for me to find it!

nice, a money-making hobby, with the money going to motorcycle parts. win win!

My goal is to find a Teutonic seat one day. Still haven't been able to find one for my /5.

There was a Tuetonic seat on EBay the other day, but the seller was asking a ridiculous price. $400.00 or something like that. I have a spare Tuetonic seat, and new spring, but not the main mount. Watching for a mount to come up for sale. Was going to make a passenger seat out of it for my /5. But I never carry a passenger so haven't done that yet.

I don't know if you go on advrider site or not but I'm SLEEVEDOUT on there if you wanna work a deal.