On the road heading to Montana. We had 93* weather on Monday leaving AZ. Yesterday the temperatures quickly fell as we headed North with the low in the lower 20*'s. Encountered snow storms within 200 miles of Las Vegas. Attempted to make it to Wells, NV. but Mother Nature turned against us. Stopped just North of Ely NV. in a major blizzard....the snow came & went the remainder of the afternoon. We pulled off on a side road with a nice gravel pullout away from the main highway 93. We've "boon-docked" here in the past so I was watching for the turnout in the snow storm.
The two lane highway traffic was very heavy all day. We saw on idiot pass on a hill and the oncoming traffic had to run off the roads' edge to avoid a head -on collision, luckily he was paying attention. Another vehicle apparently attempted to pass in a sleet storm...hitting the windrow of heavy ice in the road, he shot off the pavement and into the ditch, ending up facing backwards in the sagebrush. Luckily he didn't roll or get tangled up with any other motorists. 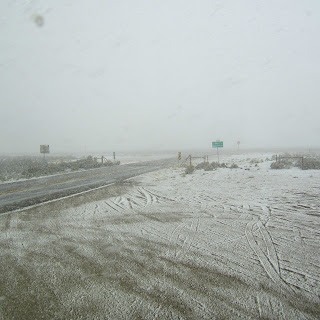 We were happy to be parked as the weather turned for the worse. One other traveler was also parked in the same parking area. 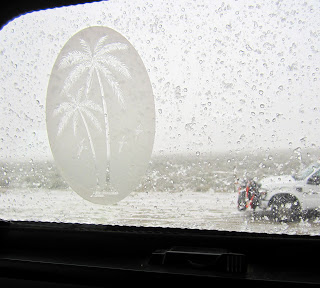 The storm continued to rage until about sundown, then the sky lightened up and actually saw some sun breaks right before dark. Got pretty cold in the night, in the low 20's. 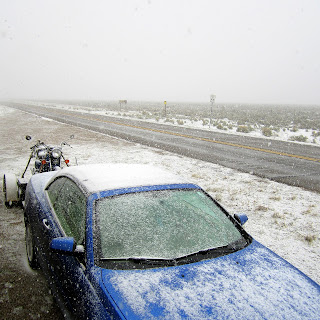 Today we'll depart when the ice melts off the car. We plan on traveling 300 - 400 miles today. Beautiful blue sky this morning.

looks like quite the storm....we're experiencing a pretty good blizzard here in the denver area today.

Quite the blizzard you are stuck in. I assume that this was with the RV and not just parked on the side of the road in the car.

Fortunately I missed our cold spell last week when it dipped to -20°F when the blizzard swept through AK.

Yes, we were safe & sound (& warm) in our motorhome. Hit more foul weather today on the Mt. / ID. border......then more yet just west of Bozeman MT. Decided to park at a truck stop near Three forks until tomorrow. The storms are just small localized "squalls" with heavy sleet / snow and heavy winds. Tomorrows forecast looks crappy from where we are to Billings....more snow & windy conditions. We have to cross the Bozeman Pass, which can get real bad....then the I-90 stretch from Livingston to Big Timber which has terrible cross winds often. Oh well, we're not in too big a hurry. Supposed to be nice & sunny on Sat.