Been contemplating the trailer hitch fabrication for the sidecar rig for the past few weeks. I had lots of different scenarios going through my head. Initially thought I would build a hitch that comes off the back of the bike. But that would take a lot of welding fabrication and $$$$ that I wasn't prepared to spend. Plus I may not like the trailer towing scenario and didn't want to have a huge investment in the deal.
After inquiring about other trailer attachments to other sidecars I decided to mount to the sidecar frame, rather than the bike. A very simple solution came together. 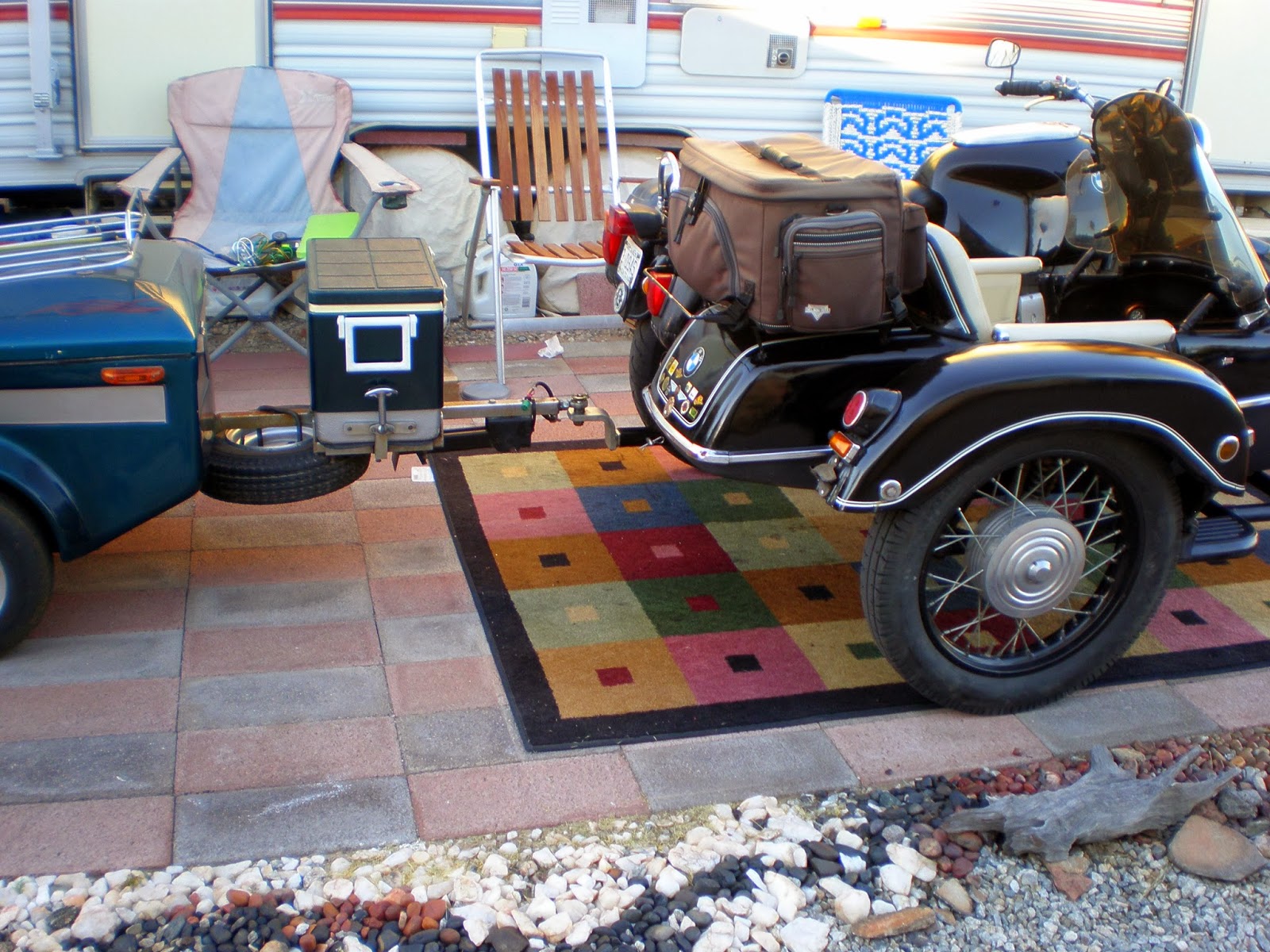 I ended up running a 5' section of heavy 1.5" tubing from the front frame through the rear frame, extending out enough for turning clearance. The receiver hitch plugged right into it after filing down the internal weld seam. 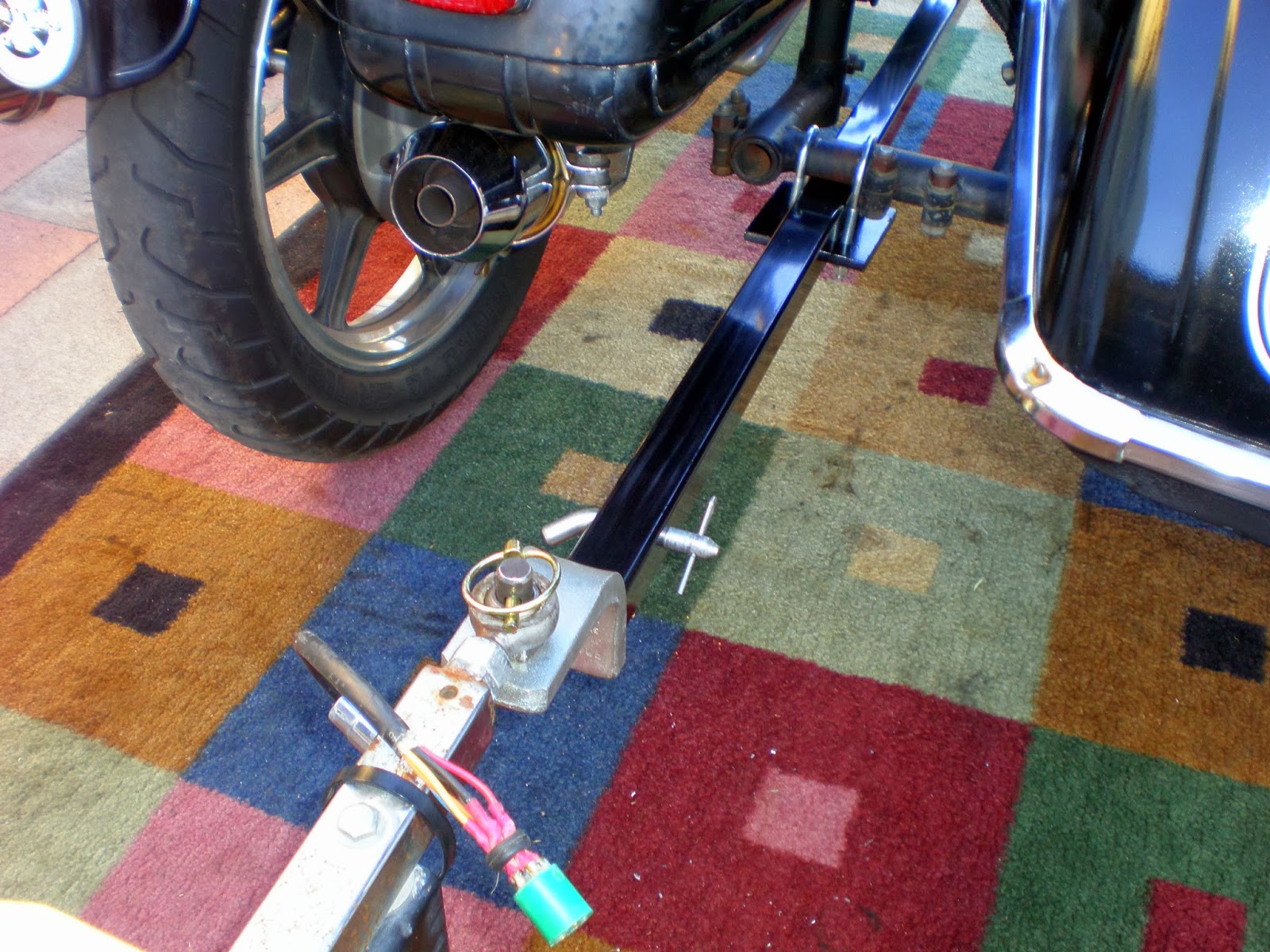 The front attachment was done by drilling through the tubing, placing metal spacers inside the tubing, (to prevent compression of the tubing) and using a u-bolt to attach it.
The rear was done similarly, except no drilling of the tubing (which would create a weak spot). I used a 3/8" thick steel plate and simply attached to the frame with u-bolts.
The strength of the tubing should be sufficient. I cannot deflect the tubing  when standing on it with my 160 lbs. I think the weak spot is likely the u-bolts as they are an "off the shelf" variety from the hardware store. I'll need to find some stronger "grade 8" u-bolts.
I utilized all 5' of the tubing piece I bought. I might be able to shorten the tubing at the receiver end, which will decrease the leverage on the attachment point. Right now I'll leave it at the length it is for the "road tests".
The current length also allows plenty of clearance for tight turns, shortening it much may allow the  attached cooler to hit the sidecar in a tight parking lot turn. 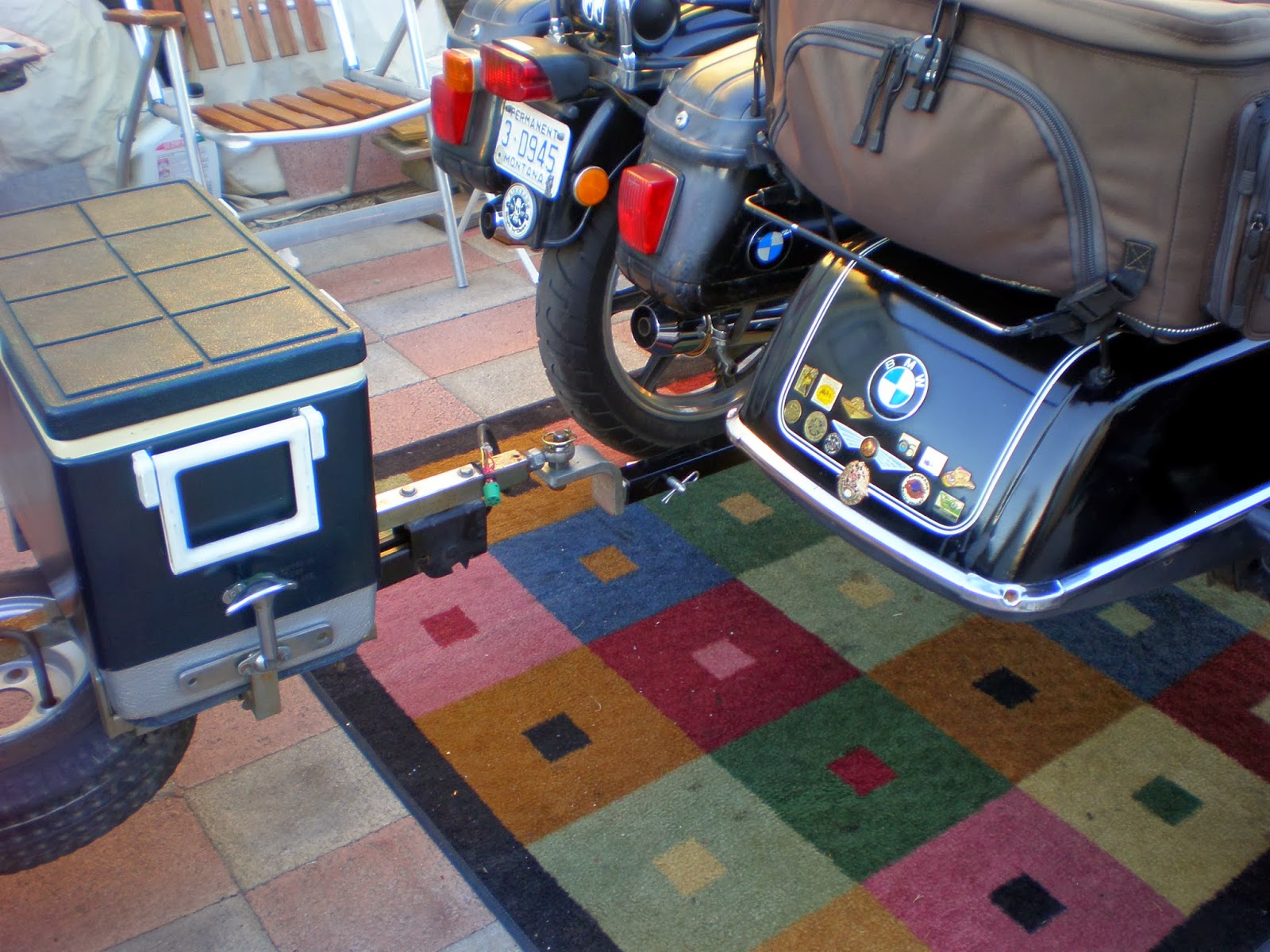 I ran the rig around the block a couple times and couldn't feel any real difference in handling with the empty trailer attached.The trailer tongue has a spare tire mounted to it under the cooler. I'll probably remove the tire and leave it off to lower the tongue weight.
I'll tackle the light wiring tomorrow. The trailer has a lot of additional lights wired to it. I'll disconnect all but the required lights.
Then I'll load the trailer with camping gear, have my "navigator"  hop in and we'll run some miles around the area to see how it handles.
I have reservations mounting the hitch away from the tug wheel as it will effect braking and cornering to some extent. The road tests will tell. Hopefully the over taxed airhead can handle this addition. The whole point of this is to take some of the load off the bikes' frame.


Decided it was time to retire the old period "Marzocchi" shocks I've had on the bike for the past couple years. Their "damping" action is getting pretty tired with the heavy sidecar use. I could rebuild them but am not into shock rebuilding. The shocks below are low mile EBay specimens that are in good condition. I looked for some original 1974 "shrouded" stock shocks but functional ones are hard to come by. The shocks below are for a R100/7 and should work fine on the sidecar rig. 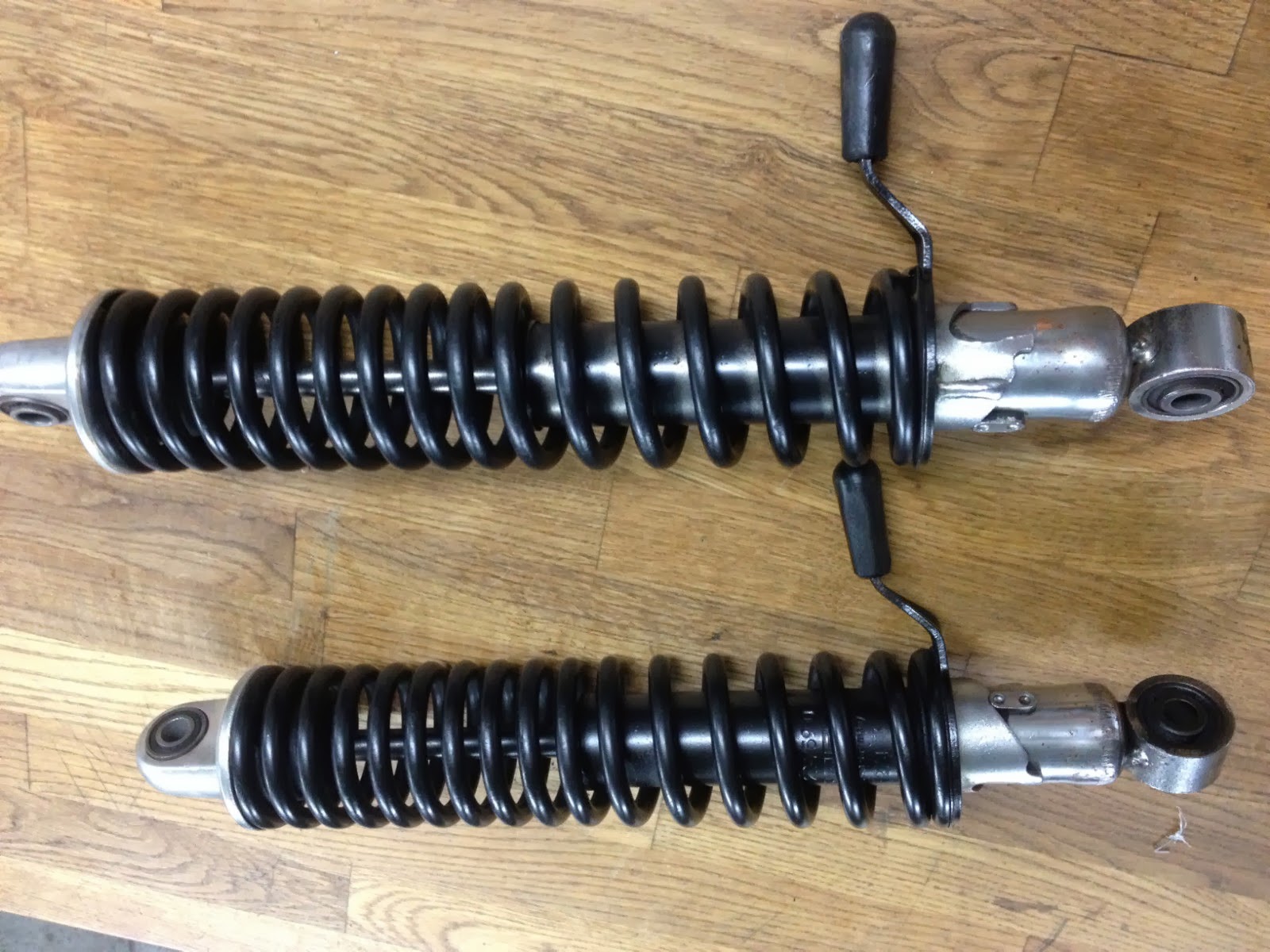 A nice, clean installation. Better than the Reynolds hitches I've seen on Airheads where the tongue load is carried on the rear subframe. You could always put a jog towards the bike in the square tube if you want the ball closer to the bike.

Greetings Richard....that is why I didn't want to mount to the bike as it would load the rear subframe even more. Those rear frames are not very "robust". I used a double braced 1973 1/2 rear frame when I built the bike, but it was cracked and I had it welded. It likely fell victim to one of the older saddle bag mounts that didn't have the lower brace.

Like RichardM said, a clean installation! FWIW, the trailer hitch for URALs is about the same location on the older rigs. The newer rigs, in the USA anyways, cannot tow a trailer as it voids the warranty so riders wait till their warranty runs out before thinking of towing a trailer. Ironically, trailers are apparently OK for towing in URALs in Europe. Not sure how that works but probably something to do with the litigious nature of the US legal system.

I've even seen where the towing point is actually directly behind the sidecar, that's how the URAL dealer in Anchorage fabbed up his rig. Swears by it.

I'm looking forward to your report on how the rig handles with passenger and a load.