Beemer in a Box 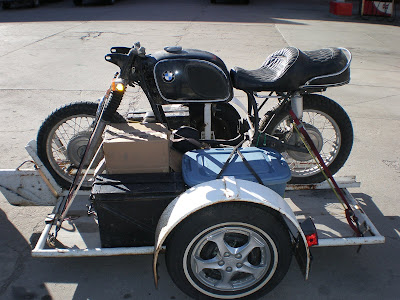 Well my fantasies of a "Barn Find" treasure were somewhat dashed upon viewing my latest purchase. We had driven 120 miles to Darby Mt. to check out the 1971 R75/5 which was offered to me . A "Basket Case" was an understatement for this old girl. It featured a partially disassembled engine, a completely disassembled transmission and parts missing too numerous to list. 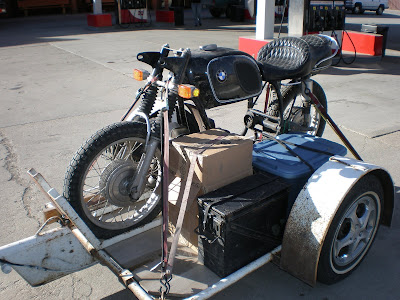 After driving so far I just couldn't leave empty handed so offered the owner a lower price than his asking price for all. The offer was accepted and we loaded it up. The fuel tank is complete except for tank pads. It has a couple of minor dings in it. The "BMW" roundels are in perfect shape so they'll go on my unused Toaster Tank. The tank will likely go on E-Bay. Wheels ,front turn signals, and many miscellaneous parts will sell easily on E-Bay. The cylinders and heads are removed and are present. The front and rear fenders are there and are in great shape with original paint so they are excellant sale items. The boxes included a few nice Japanese Bike parts so I'll likely list them. Also included was a brand new Harley Davidson Detachable backrest. I checked it out and new ones are over $200.00 so we'll see what that will bring. 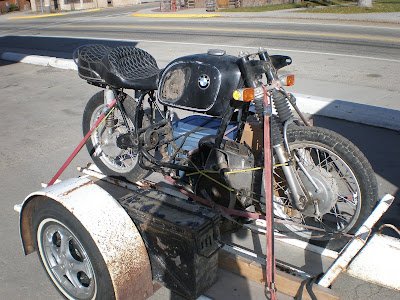 The "bucket" seat is one of the ugliest things I've ever seen but it does have a stock BMW grab rail on it. Don't know what I'll do with the seat. The bike has a 32:10 final drive which is the same as my stock final drive (which is 50% worn) so maybe I'll keep it for a spare. There are many usable engine parts so we'll figure out what to sell and what not to sell. I'll keep the electrical diode board for a spare and maybe the rotor if it's good. Most of the engine metal has been polished so someone had a love affair with the bike in it's distant past. The engine parts removed appear to be in perfect shape so I have no idea why someone would have pulled it all apart. The seller said he is missing another big box of parts which held the rear signals, headlight shell, carbs and a lot of the missing parts. If he finds the missing box he'll contact me and send them to me. I'll keep my fingers crossed but won't hold my breath.