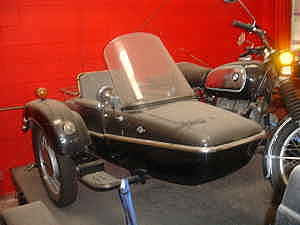 I recently had a gentileman contact me who ran across this old gem on Craigslist in Ca. She's been sitting for a number of years as the dust patina shows. Pretty poor photo but it appears to be complete. $5000.00 would take it home. Looks like the hack has its' own rear view mirror. Can't tell if it is a long or short wheel base BMW. The prospective buyer wanted my opinion of the R75 tug. The R75 is capable but it really depends on what you want to use it for. If one only wants an around town plugging around bike the R75 is fine. If you plan on longer travel, heavy loads and touring, modifications are in order. The modifications I've performed have been pretty much from my own experiences and observations. Hauling the hack is definately tough on all components of the BMW. 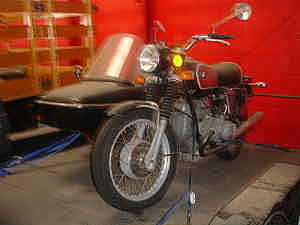 In my case I was somewhat bored with the same old ride and the hack addition really fit our needs at this stage of time. There are lots of set up rigs for sale out there but for me a lot of the fun has been setting up the rig and performing the modifications I deem necessary. I imagine some BMW "purists" would be agahst to see a nice old "Toaster" modified to such a degree. Each to their own. Our hack riding season here has stopped for a while as we have taken the hack off in anticipation of moving south in the next few weeks. We'll probably end up in the Las Vegas area working in November. I just disassembled the Jupiter Sidecar interior and it has been taken to an upholstery shop to have the interior redone in a white "Ultra Leather". I have an old ragged R90/6 seat which fits the R75 so I'm having it done in white also. Don't know if I'll use the stock BMW seat but I will have the option.
I just won a pair of old long/low BMW mufflers on E-Bay for $50.00. They use the stock mounts and sit down low, closer to the ground. The stock pipes sweep up higher. The low pipes will give the bike an older look and will also get the exhaust noise farther behind us. I also won a spare steering damper rod and hardware for $35.00 . My first BMW suffered a broken piece at the bottom of the damper so I want a spare set of hardware in case of a failure on mine. Losing the center steering damper would be catastropic on the road. Our bike suffers from a steering wobble and lightly adjusting the steering damper nuetralizes the low speed wobble. I ran across a complete R75 side car modification kit last winter at a BMW dealer garage sale in L.A. I didn't really understand all the parts included in the kit so passed on it. It needed a lot of additional parts and bearings to be used. Now that I am more familiar with side hacks I realize what I passed up. The kit had a widened, reinforced swing arm, 3 - 16" steel 5 spoke wheels, an earls' fork, and other misc. stuff. In hind sight this was a super set up and would have been ideal for what I need. It would allow much wider , smaller tires and lowered the rig. Irv Seaver BMW was having the "garage" sale and maybe the kit didn't sell. I will check this winter. I could have purchased the kit for $800.00 at the time. The fork change is definately in order for side car use. I am nervous about purchasing some of the earls forks I've seen as fitment isn't always that easy. Plus I don't want to spend thousands of dollars doing it. Oh well, another project for down the line.