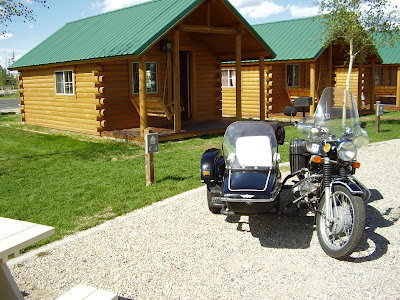 We made it to West Yellowstone on Sunday afternoon after a great ride through the park. We had reserved a small one room cabin a week before as it only cost $20.00 more than a tent site. We went into town in the early evening to eat and the temperature dropped about 30 degrees in a few minutes and rain poured down. We hung out til the rain stopped and back to the cabin we went. It rained on and off all night but by 8:00 am the clouds broke some and the sun was coming through. We did a quick Macdonald's breakfast and headed out around 10:00 am. 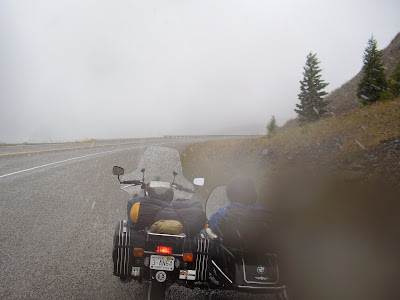 Our route took us around Hebgan Lake and Quake Lake. Approaching Hebgan we could see that rain was imminent so we stopped long enough to put on more layers and some rain gear. As we hit the Quake lake the rain got heavier and then turned to snow. These photos don't do justice to the snowfall. I had to pull over as I lost visibility and between the fogging face shield and the wind blown snow I was blinded. I took a quick pair of photos' and we headed out and made it about a mile to the Visitor Center. 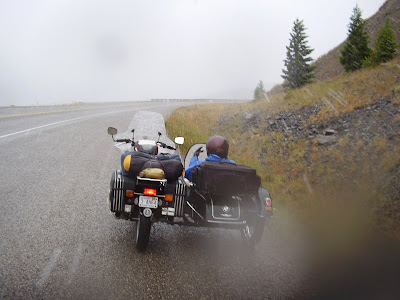 Uncertain what to do we sat for a minute. A couple of people in their cars were looking and pointing at us and photographing us as we were turning white with the wet snowfall. I decided to hell with it and we went onto the road again. The snow turned to rain in a couple miles and we breathed a sigh of relief. Within minutes we were back into a worse blizzard and I fought to see the road and the other traffic around us. This went on for 40-50 miles as we struggled along. The bike and sidecar windshields iced up and my face shield was iced over. This was probably the longest 50 mile ride of my life. I was able to ride a while with the face shield up and peered over the ice covered windshield. The snow turned into a sleet hail kind of stuff and I was blinded when the stuff went into my eyes. I had to shed my eye glasses early on due to fogging. We pulled to the narrow shoulder and I regained my composure before setting out again. We finally rode out of the heavy snow and pulled over near Cameron. The bike was covered in ice and snow and we were pretty well frazzled. The photo below shows the ice laded bike and passenger. Actually we faired well except for my frozen hands and feet. I could not unlatch my helmet as my fingers were useless. Darian finally got my helmet untied and we sat for a bit and regrouped. From there on out the weather was on and off rain which was not bad at all compared to the Sept. 1st. blizzard. It was nice to get home safe and sound. Definitely one of the longest hour or so rides of my life! 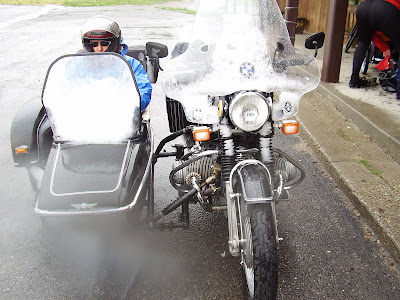