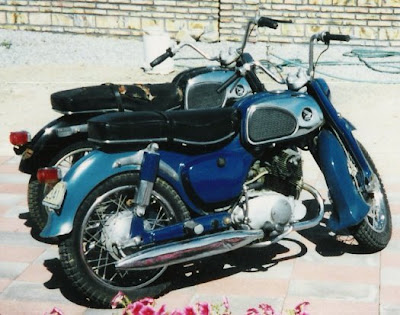 Over the years I have found many, many old bikes, particularly in Arizona. The climate in Yuma AZ. is very dry and old bikes seem to sit in a state of "mummification". Normally the heat will deteriorate all rubber parts but all in all the arid climate preserves the major components. Above are a pair of Honda CA 95's. The blue one is a 1961 model. These are a 150cc engine. The blue one had around 6000 miles. The black one was a 1964 model and had some engine troubles. I purchased the pair from a former Yuma county sheriff who had the bikes in his back yard for 30 years or more. They sat with a piece of plywood over them. I spent 4 hours getting the blue one running after it sat all those years. A battery and fuel lines was all it took. The owner had drained all the gas when he parked them. I paid
$250.00 for the pair. He had the original owners manuals, titles and keys. The tool sets were complete and never appeared to be used. 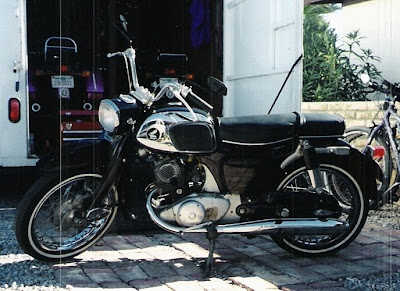 This is a 1967 CA95 also. I found it in Yuma for $250.00 also. It looked terrible when I purchased it. A little elbow grease and major cleaning brought out a beautiful bike. It was a simple repair to get running. Battery and a carb. cleaning. Had the original white wall tires. I think it had around 8000 miles on it. Was a great running little bike. 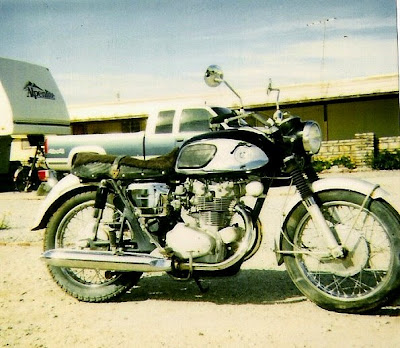 This is a 1966 450 Honda "Black Bomber". I got it from the Yuma Sheriff also. It had only 3000 miles on the clock. The mufflers and all chrome were pristine. The original owner had chromed the side covers. I spent a few hours to get it running. The tires were original and had flat spots from sitting all those years. They even held air. Of all the bikes I've had this is the one I wish I'd kept. It only needed tires, seat cover, fork boots, and tank emblems to be complete. I now see them going for thousands on E-Bay. I sold it for $650.00 to a fellow Airhead in Sacramento. 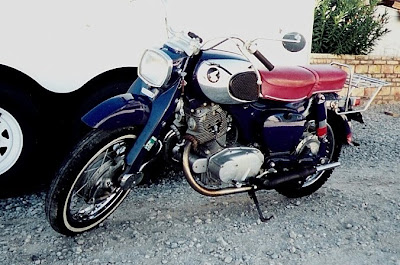 This is a 1969 305 Honda "Dream". Paid a whopping $500.00 for it. It was a runner and had very low mileage. 5000 miles I believe. Was missing original mufflers, and carb. cover. It drove like new. I did a partial trade for a M.C. paint job with this one. The blue w/red seat was a rare original color scheme. I always ran newspaper ads in Yuma looking for old non-running bikes. maybe I'll run another ad this winter, you never know what might still surface.