I watch the local "Craigslist" on a daily basis since you never know what might show up.
A couple weeks ago someone posted an older Yamaha XS400 for $600.00.
A one owner bike with a mere 2784 original miles on it. The down side was that it has sat dormant for many years with a couple gallons of stale gasoline in the tank. 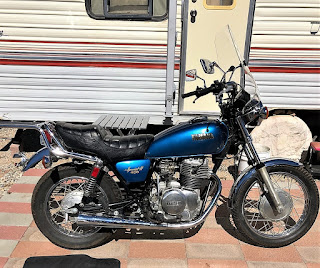 I went over to look at the bike and ended up making a deal for $500.00. Still has original tires which are as hard as wood. They will need to be replaced prior to riding it more than around the block. 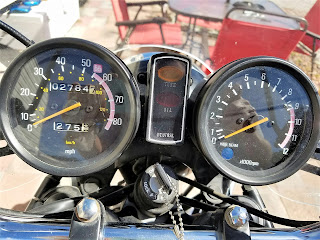 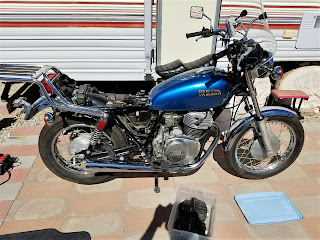 I immediately removed the carbs and fuel tank. Tank has some rust inside so it was drained and filled with vinegar to try to "cook" some of the rust out. I've used that method in the past but not sure if it will work on this....quite a bit of rust in the tank. I'm soaking it for a week or so and we'll see. My hopes aren't too high with the vinegar method.
The carbs were a mess. The floats / needle valves were stuck solid with varnished fuel remnants. The CV carb slides were also stuck. I freed the slides using "PB-Blaster" and got them removed. The float pins were another issue. After soaking for 4 days in carb cleaner they still wouldn't budge. I finally resorted to using a small butane torch and applied heat. That did the trick and eventually the float pins and needle valves were removed. 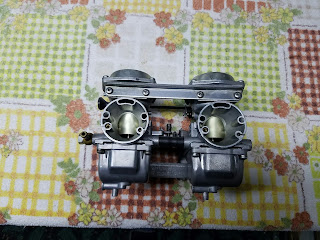 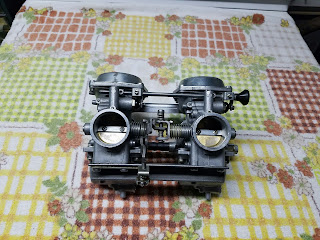 Unfortunately I got a little carried away and melted the solder on one of the alloy floats and it came loose from the holder. I was able to re-solder the float back together. The float swivels / pins required some filing / sanding to remove the near "concrete like" varnish. I had some replacement o-rings so used them, but didn't have new float bowl gaskets. Decided to reassemble with the old gaskets for now, they came off easily but are a little stiff. Easy to install new ones at a later date. 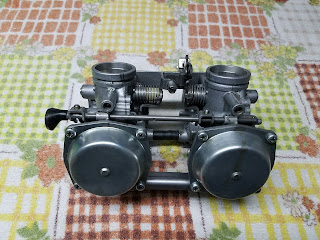 I recently ordered a new oil filter & o-rings o decided to drain the oil today....oil came out fairly clear looking and no major issues seen. The XS400 does have a small inspection plate / oil screen underneath. Haven't decided whether to remove the cover / clean the screen yet. As clean as the oil appeared it is not likely an issue. The oil filter housing thru-bolt is stuck solid so may need to cut it off to remove. I ordered a new Yamaha filter bolt today so will likely sacrifice the original one to remove. So far I've spent about $60.00 on repairs...will need 2 tires and a battery yet. Will also drain the fork legs and replace the fork oil. This model had front / rear drum brakes so no hydraulic brakes to repair. The chain was pretty loose so adjusted it to proper tightness.

UPDATE: The oil filter bolt / pressure tube removal ended up being an "afternoon project"....as it was REALLY "nature welded" into the engine block.   I fit the proper 12 MM "six sided" spanner wrench first off.....then went to a six sided 12 MM socket.....then to a twelve sided 12 MM socket....all slipped while attempting to loosen bolt. In desperation, I "drove" a slightly smaller 7/16" twelve sided socket on the bolt but it slipped also. Then I used a tiny Dremel Cut-off wheel and cut the mangled bolt head off....then drilled a small hole in center of bolt. Three different sized screw extractors were then used in an attempt to loosen the bolt. All simply slipped and gouged out more metal. Finally decided to attempt removal with a cold chisel / hammer. Used a "miter" type Dremel Bit and enlarged the hole, then cut slots in the perimeter so I could use a chisel. Finally was able to "break" the damned thing loose with the chisel. Took about 3 hours total to remove it, but no collateral damage....yay! 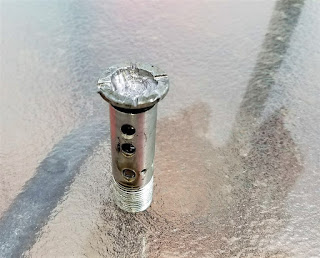 The new oil filter bolt / pressure tube is a Yamaha OEM bolt. The replacement uses a larger 17 MM bolt head, rather than the little 12 MM head. I used a bit of "anti-seize" on the threads and did not over tighten. 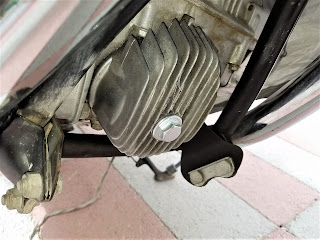 Bought the cheapest battery I could find at an implement store...$60.00 for a conventional lead acid type battery.

I rode the bike in the neighborhood a few miles and eventually had a flooding issue with the left carburetor. ...Pulling it apart I found one of the float bulbs full of gas. The solder on a seam must have breached when heating the float pins. Rather than screw with it any longer, I ordered one new float assembly and two new needle valves / seats. Carb removal is now a 15 minute process (practice makes perfect) so no big deal.

Ended up using Apple Cider Vinegar for 5 more days to de-rust the fuel tank. The rust vanished after that time frame. I flushed the tank well, then added some baking soda / water to neutralize. Then added some "Marvel Mystery Oil" and sloshed around. Tank interior came out looking good. I installed an in line fuel filter for insurance to catch any rust remnants which might surface.

This Model Yamaha used a "vacuum operated" fuel tank petcock. These type do not have an "OFF" position, but rather are supposed to shut automatically when engine vacuum ceases. I've had a few of these over the years and without exception, with age, none of them have worked properly. This one is the same, so I added an additional "in line" petcock I had laying around for insurance. I found an exact configuration petcock on eBay, without the vacuum assembly, so maybe I'll buy one at some point.

Done for now.....used some light de-greaser in all hard to access spots and gave the bike a good cleaning. The little windscreen which was on the bike did not fit well so I removed it. I decided to fit it to my /5 BMW. 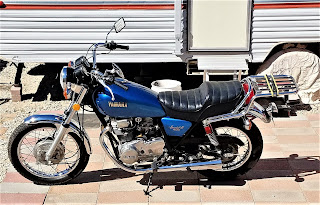 So now have a grand total of $690.00 invested in the bike, including the purchase price.
I'll definitely keep it for a "rider" for a while....or maybe my Wife might like to ride it. ... Plan on hauling it North to Montana this Spring and I'll license it there. Done for now.

Loved readingg this thank you