Time for a Sidecar Re-Fit

I'm seriously considering retiring from the working world this Fall so with that in mind will be planning some serious sidecar trips with my Wife. Our last "long" trip (in the only 800 - 1000 mile range) was to Death Valley in 2016. That trip brought forth possible transmission issues when a serious noise developed when I ran the bike hard, overheating the transmission. I change gear lube quite often and am finding metal "flakes" starting to show up on the magnet. So, the transmissions' service life is coming to an end. Rather than remove / rebuild that transmission I decided to have a couple of spare tranny's I had rebuilt for the swap. Both the transmissions came from "derelict" bikes so I have no clue of their condition. Both bikes (I was told) were in running condition before my acquisition. One with the 4 speed was a crash victim, the 5 speed bike had an engine issue. No way was I going to install either of them without inspection / rebuilding. Only want to install once! 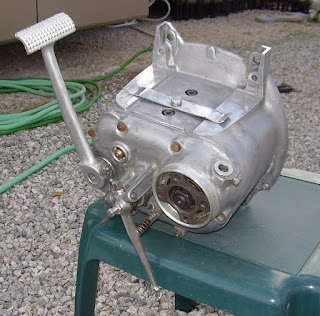 Near "As New" input splines: 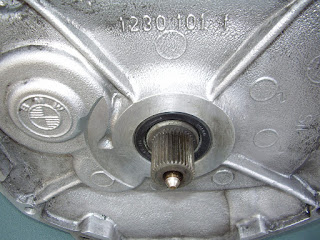 I had this clean 1972 R75/5 Transmission stored away and have decided to install it behind the R100S sidecar engine. Bob Clement, owner of Bob's Motorwerks, is in the process of rebuilding it and also a spare 1974 Five Speed I had sitting. The 74 five speed transmission has the kick start. That is the same model transmission I'm using in the sidecar now. The 4 speed is a more "robust" design and Bob recommends it for the sidecar. 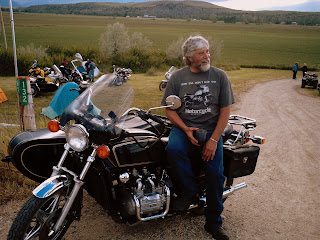 I'm currently running a 32/10 final drive with the 5 speed, but that might be a bit high geared for the 4 speed. I also have a 37/11 final drive which is one range lower geared so can swap if wanted.

I've noticed that my rear wheel appears to have a bit of a left "lean" so think the swing arm is probably "tweaked" a bit. Tire wear is normal, handling is not affected so I haven't bothered to do anything about it. Since I'm changing out the transmission, I'll swap out the swing arm with a heavier, later model LWB one I have.

Lastly, I may pick up a pair of matched replacement pistons / cylinders (currently on EBay) to have on hand if needed. The cylinder heads were redone, with new valves / seats / guides a few years ago so should be good for a while yet. I do have a loose pushrod tube on a left cylinder, although it is not leaking, the pushrod tube seal collar is loose and doesn't properly compress the seal to the engine block. I put a couple of hose clamps on the tube collar a couple years ago as a stop gap fix.

So this Winter I will separate the sidecar and go over (at least) the following....Transmission change, inspect clutch (only a couple years old / maybe 10,000 miles on it), change out swing arm, check and /or replace swing arm bearings, possibly swap out Final Drive, reseal oil pan & cooler which have been leaking, replace pushrod tube seals, new tires, and  go over all ignition system components.

As the bike sits now, I would not take off on a multi thousand mile trip as I know the Transmission is tired. Although it still works fine and shifts well, I know its' days are numbered.

Old bike line up in Bob's Shop a few years ago: A couple years after the previous photo 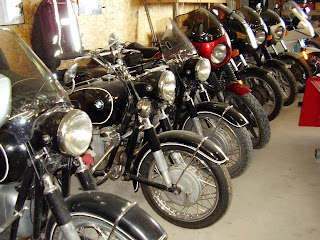 Bob used to have a yearly "Solstice Party" at his shop.
You never knew what might come roaring in on the gravel road: 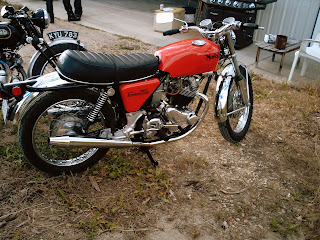 Bob performed some restoration work a few years ago on this WW2 Era BMW R75
He said it was the best sidecar rig he has ever ridden. 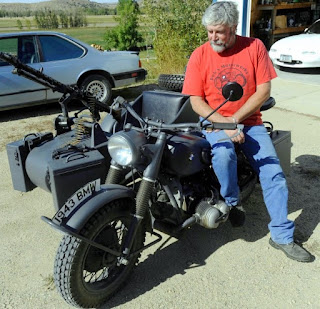 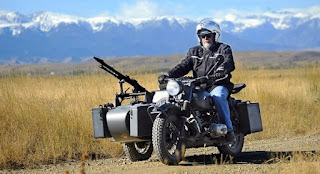 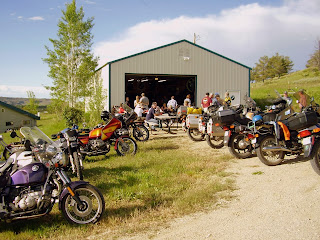 That looks like a lot of work you have lined up for the BMW rig. I had a five speed on my R100 sidecar rig and was told to never use 5th. The front bearing on the output shaft wasn't up to it. I sold the R100RT rig last winter as I used so rarely. The Ural is so much easier to drive though definitely slower.

Hey Richard,
You know I was told the same thing about not using 5th. gear. Ironically, running hard in 4th. gear is what led to my transmission overheating and beginning traits of possible failure. I have "nursed" the transmission for the past year and a half by keeping loads minimal and not running it too hard.
I was pulling a long 15 mile grade outside of Death Valley (also pulling my small trailer) and decided to stay in 4th. gear at 60-65 MPH. When I reached Death Valley Junction, I pulled over and heard a horrendous racket coming from the gearbox....pulling the clutch made no difference. I shut it down and the transmission was so hot I could not touch it. I let it cool down for a half hour or so, but the noise remained.
We rode slowly down into Death Valley to Furnace Creek and by the time we got there the noise had stopped and the transmission was quite a bit cooler. Found replacement gear lube, dumped the transmission and found the typical "mud" on the magnet plus a few "bonus" metal flakes. A tiny little piece of 3/4" long metal, resembling a wire brush "bristle" also was present. No idea where the "bristle" came from. Did not look like anything that should be in the transmission.
I've ran the transmission probably 1000 miles since the episode with no issues as of yet, but bigger issues are likely looming. So want to swap transmissions before this one self destructs...lol.... I do have high hopes for the 4 speed transmission...we'll see....

Ural Sidecar......I am seriously thinking about Urals.....Am not comfortable running much gravel with my BMW. That fact really lessens the options for any non paved back roads....2wd Ural would be just the ticket. What is your "Safe / Comfortable" highway speed with the Ural?

FWIW, 55 is the most I push my URAL rigs to, even on the interstates. I've found that folks just pass you by, seemingly amused. Only one or two jerks along the way on state roads that seemed offended at me going 55.

I'm on my four Ural now, and running them faster than 55 seems to assure the engine's destruction sooner. Overloading them is another sure fire way to damage things as is lugging the engine. Sigh.

I have high hopes that my fourth rig, with the R80 Beemer engine will be more reliable; at least when it comes to the engine.

On the supplements said...