I've sorely missed my old 1973 R75/5 BMW since I sold it a few years ago.
10 years or so back a friend restored a 1971 R75/5. He took it down to the frame and performed a ground up rebuild. Everything was attended to except the engine and transmission as they were in good working order. He had a professional "British Racing Green" paint job, painted the frame, had the "MotoMeter" instruments rebuilt, new OEM /5 "Cigar"  mufflers, new head pipes, 2 Tuetonic QSL solo seats, new Hepco Becker luggage, Euro (low) handle bars,...the list goes on and on...A couple years after he built the bike he happened across a 6" x 6" post on a dark road. Hitting it at highway speed he bent both rims but was able to ride the bike home. At that point in time the bike was parked and there it has sat. He offered the bike to me a couple years ago but financial resources were minimal so I had to pass.
Today he called me and offered the bike again. At this point I am longing for a "new" /5 BMW, the funds are available, so we came to an agreement. I'll pick up the bike in a month or so, as it is in the North San Diego County area.
I'm excited to get another /5 BMW on the road again. The bike has great potential and comes with lots of extra parts and accessories.
The 1988 R100RT "Mono" I recently purchased will definitely take a "back burner".... I might get it running and sell it off as a "Project Bike".  My other option would be to part the R100 out and save the drive train as a "back up".
At the same time I got a contact for a tired R80RT for $500.00. It would be a good parts bike, but I'm quickly running out of places for more bikes. Will likely end up passing on the R80....plus I wasn't planning on a "new" /5 project this winter....my winter bike project list is growing quickly.... 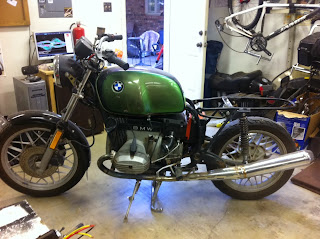 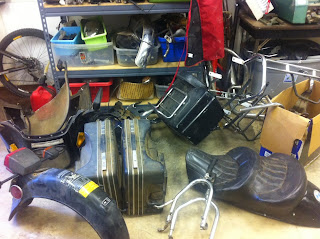 Not my "new" BMW below but one off the "net"......mine is coming to me in somewhat of an "assembly required" condition.It has a solo seat and the lower handlebars. 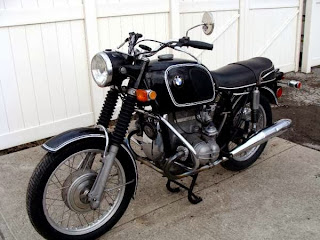 I'll never forget my first test ride on my first BMW. I had ridden my Brothers R80ST but it didn't leave much of an impression on me. When I made the R75/5 test ride, the bike reminded me of an old pick up truck. Clunky and somewhat antiquated. After a few miles I was in love and had to own it. I paid $1200.00 for it. It had numerous minor issues which I sorted out in the couple years I owned it. When sold, she was in need of a valve job due to an exhaust valve recession. 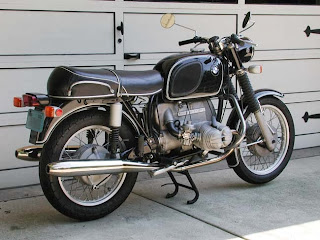 Above is a similar 1971 R75/5. My first BMW Airhead was a Black 1971 750cc model. They can be identified by their Short Wheel Base, side reflectors on the alloy turn signal housings, and lack of side covers. I've seen folks with 1971 models stating they are "missing" the side covers. They came without them and had no frame "tabs" for the placement of them. The weak point of the 1971 models was their first generation /9 - /10 Bing constant depression carbs which often have issues.
I believe they all had the larger touring type 6.5 gallon tanks, I don't recall ever seeing an early /5 with the smaller 4.5 gallon tanks. The chrome sided "Toaster" tank was not available until 1972.
Purchasing the 71 /5 "sews up" not purchasing the BSA Bantam I was looking at. Probably a god idea to stay away from the rare bikes anyway...probably would turn into a money pit with minimal resale value.
Posted by BMW HACKER at 7:02 PM

Another nice project bike. I always liked British racing green" and have considered painting my R100RT and sidecar that color maybe with gold pin striping. But that project is so far back on the back burner that it won't see the light of day for quite a while.