No camping planned for this ride so we were able to pack pretty light. We were on the road by 8:30 Sat. morning. A beautiful morning and not a cloud to be seen. We headed south through the El Malpais Monument. The roadway follows an ancient lava flow for a number of miles. 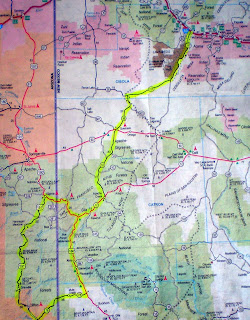 Very interesting sandstone cliffs along the route in El Malpais.
(left "click" on photos to enlarge) 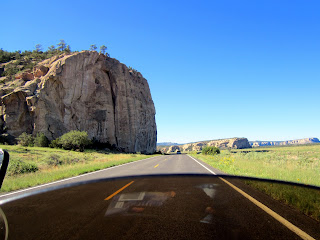 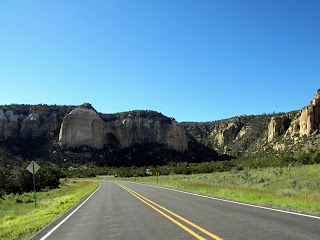 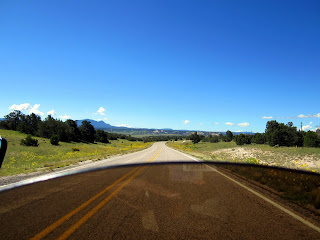 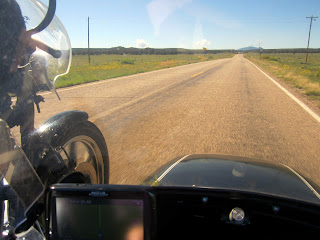 Miles and miles of yellow sunflowers.  We saw probably less than 1/2 a dozen cars.
Photo below was taken through the "smoked" sidecar windshield so the color is odd. 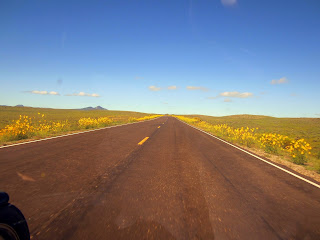 The scenery changes as we entered the San Francisco Mountains.
Darian in her navigator / photographer position. 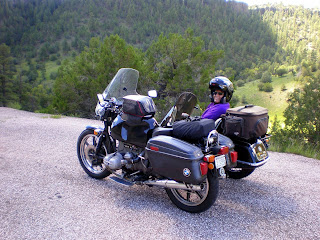 Great ride through the canyons. 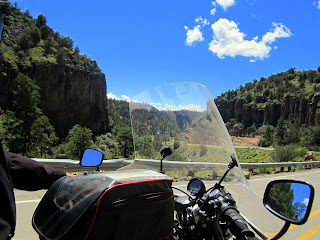 We had a room reserved in Alpine but arrived there pretty early. Decided to run over the summit to Eager / Springerville AZ. 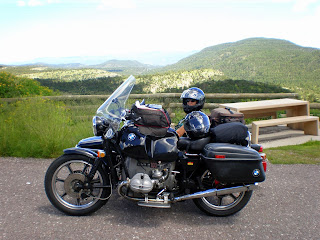 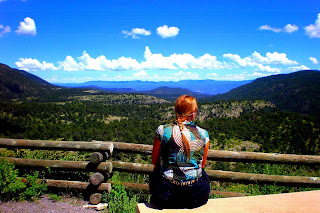 Down the grade into Eager / Springerville.
Typical afternoon "monsoon" in the background.
We've been seeing spectacular storms nearly every afternoon. Witnessed a few small "flash flood" episodes since we've been down here. 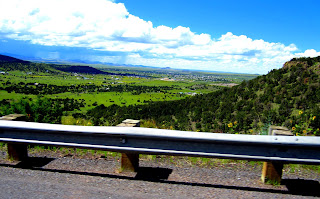 Spent the night at Alpine at the "Sportsmans Lodge". An old Motel but well kept. The owner is a BMW rider and had a couple bikes out front. We talked about his bikes for a while and discussed the route we were planning on taking the next day. We wandered down to a local "grill" and had steaks for dinner. A great day!
I peeked outside at about 11:00 PM and some guy had squeezed his 1 Ton Dodge Pickup in against the sidecar. I had a cover on it and the guy was less than 6" from the fender with his front right tire. It looked like he had hit it. I went out , uncovered the bike and moved it over a few feet.

The pushrod tube seal leak required attention all weekend. I have been stuffing small chunks of cloth rag below the tube / lower frame to contain the oil seep so it doesn't end up all over the rear of the bike / tire. Had to swap out the small piece of rag every 80 - 100 miles or so as it would saturate. The engine lost nearly 1/2 quart of oil via the leak in the 550 miles we rode. No more road trips until I get the seals replaced. That task will have to wait until we get to Yuma AZ...probably in mid - late November. I'll remove the sidecar and give her a good "once over" which I like to do every so often. I also would like to get a steel pipe brace welded into the Earls Front end....whoever modified it years ago removed the steel pipe bracing section (interfered with the front engine cover) and did not reposition / weld it. I currently have an axle shaft in the extra Earls swingarm hole for additional bracing, but need to get a proper brace welded in. The tight corners / switchbacks we encountered this weekend reminded me that I need to do this. No issues, but that is a LOT of stress loading on the front end when in such terrain.I've been meaning to accomplish this for a couple years but have no "trusted" welder located...I'll have to work on that when we get to Yuma AZ.

Day 2 took us into some awesome riding country....I'll hopefully post "Day 2" later in the week or next weekend......gonna be a long, busy work week for us. Will be hitting the road by 4:30 AM for the next few days.

Wonderful post. That is a huge tank on the tug, I went into your archives to read more about it. The stock 6 gal tank means that I'll need to carry a gas can on just about any road trip.

The tank is supposed to be 8.5 gallons but 7.5 - 8.0 is more realistic. I'm achieving 25 - 30 mpg depending on speed. I have an extra 1.25 gal. fuel container strapped to the sidecar step on trips like this. Towns are very small and I wasn't sure how many gas stations would be open. As it was, no problem, but after 80 - 100 miles I refuel if I can.
One year I got caught in the Mohave Desert when the only gas station for 80 miles was closed....ended up buying gas off some construction workers to get to Baker CA.