Late yesterday I decided to get a start on the R100S projects. The battery seemed low so I went ahead to recharge, might need to rreplace(?). I'll take on a number of small tasks while the bike is apart:
Clean fuel tap stainers.
Check ignition points.
Reset ignition timing.
Disassemble / lubricate starter bushings.
Clean electrical / ground connections.
Install the Breil Oil Cooler.
Re-synch Bing Carbs with Twin Max.
Upon removal the air filter element looked as new, so not a lot of crankcase blow-by getting into filter. I've retained the stock crankcase vent recycle into the airbox rather than an external vent. This blow by oil often fouls the filter elements over time.
This is the Breil Oil Cooler sitting on the stock R100S pan. 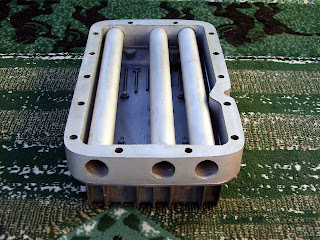 The starter has been acting a little sluggish so I decided to remove it, disassemble it and lube the bushings. The "sluggishness" might have been from the low battery but the starter has always seemed finicky. Since I'm tearing into the bike, might as well check everything on my "list". 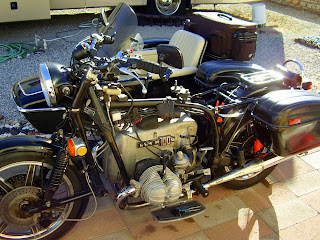 I removed the Heinrich Tank to drain it, then will pull the fuel taps to clean the strainers. Haven't done this for a couple years. Seems like there is always some debris on the screens after a couple years. We'll see.....The tank had leaves / dust in it when I found it. I simply flushed it out before putting it to work years ago. No rust, but it has always seemed to generate some small debris onto the strainers. 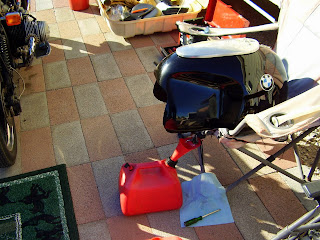 The starter comes out easily with 3 bolts. The front cover must be removed to access one of them. That's cool cause I need in there to set the timing / check the ignition points anyway.
The BMW Airhead design is so simple....took only minutes to take the engine down to this point. Of course I've done it numerous times and have had a lot of practice. 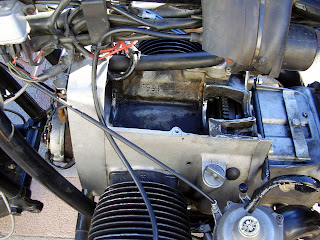 While in here I'll be cleaning electrical connections and generally checking things over. Looked over the brake master cylinder and all looks good. I've "shrouded" the coils with old rubber inner tube pieces as the Heinrich Tank tunnel contacts a few spots when in place. 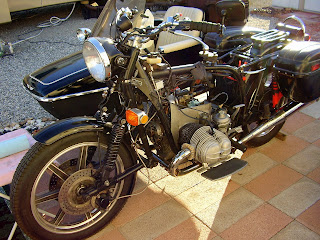 Had an interest in a 1993 Suzuki VX800 from a local Canadian seller. Rode into Yuma the other AM to check it out. Poor old bike has been pretty abused and laid down. Had sat for 6 years with fuel in the tank. Tank interior had a lot of varnish and minor rust. The carbs were not stuck and the owner had rolled the bike in gear and the engine is not "stuck".
Kind of a intriguing machine with the V- twin engine. 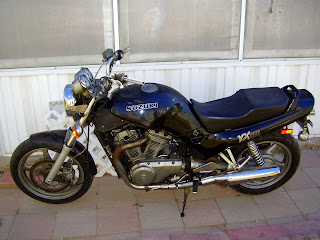 The odometer showed 28k odd miles. The bike had a lot of small issues, loose wires, dents, broken signal light, damage to instument housing, sun - rotted plastic, old tires, etc.
Could have probably hauled it off real cheap ($300.00 - $400.00)  but it looked like a one way money pit to me, the seller suggested $500.00 but was open to offers.
Quite a risk to buy a non running bike with all these small issues. Resale value would be low without a lot of $$$ investment. The brake hydraulics would have likely needed a complete rebuild also. 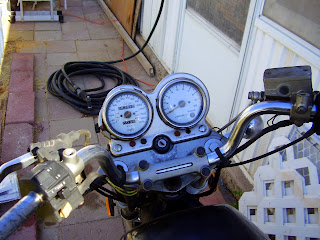 Nice summary and I like the way the oil cooler looks. I have the stock oil cooler and I'm hoping that it will be adequate. Not having an oil temperature gauge makes it hard to tell. Do you still have the stock gearing in your RS? I probably should look at all of the build posts but I haven't got around to that yet.

And it will be interesting to hear how the starter cleaning goes and if it helps. The stock starter always sounds like it's working really hard compared to the newer non-BMW ones.

I'm running a 32:10 Final Drive with a 1974 five speed kick start transmission. The 1974 transmissions were notoriously weak but this one is working well after years of hard duty. It may have been updated in its' past.(?) I have a "dip stick" type oil temperature gauge, but their accuracy is typically a little off....you get more of an "atmospheric temp" than a true oil temp. Many old school BMW riders say to throw them away.

32:10 is much more favorable to my 33:11, at least that's what I believe it is. As it is, 5th gear gets almost no use on the roads up here in AK and with the sidecar, I suspect that'll turn into never.

I really like the combination of the 5 speed and the 32:10 final drive. 5th. gear is like an overdrive, with the engine just loping around at 60 mph.
I was going to install a 4 speed transmission which I have, but I've found that the 32:10 final Drive is a bit high for the 4 speed. In the past a 37:11 Final Drive paired with the 4 speed was a good combination on my (900cc) R75/5. I ran a 32:9 for a while but it was geared a little too low, with pretty high RPM's at highway speeds. Nearly all my sidecar use is on pavement, so extra low gearing is not a real requirement.