The other night I was snooping around on EBay and saw this seat at $.99 with a few seconds to go....like a fool I bid $1.04. Low and behold I won the seat for that amount....without noticing that the shipping was $50.00. Crap! Darn impulse buying! More on the seat later.... 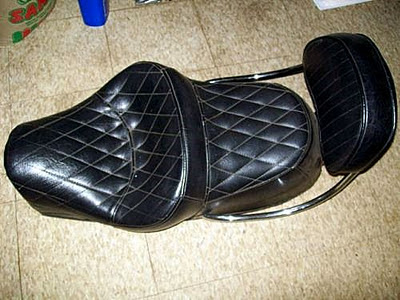 Weekend before last I took some time to sort out the R60 a little bit. Removed the fuel tank and seat and decided to give a shot at starting it up. I knew the the wiring had been modified to fit the "Puch" headlamp so opened it up to check it out. The 1971 BMW's don't have any fuses in the electrical system so burning up wiring is common. I temporarily tapped in a 30 amp fuse to the main power source. I have no key so I figured out how to simply "hot wire" the ignition switch. I had an old weak battery so charged it up while I checked for open wires which were unconnected. Wanted to make sure nothing would short out upon bringing the electrical system back to life. 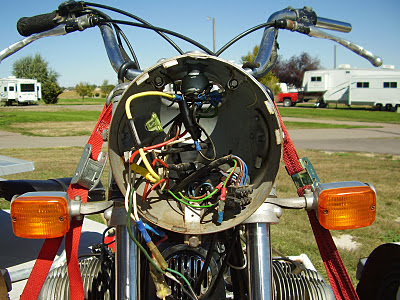 I looked things over and taped up a couple of unconnected light wires. Under the fuel tank , the dual coil system lives to power the dual plugged heads. This is a pretty expensive upgrade which a previous owner spent quite a few bucks on. 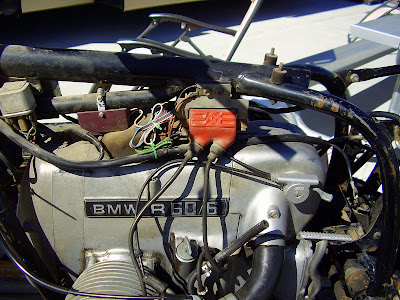 I hooked up the old battery I had which had charged to 80%....enough for this point. I made sure the crankcase was full of oil and rigged up a temporary fuel supply, in this case a large syringe body. I energized the electrical system and had no apparent shorts anywhere....I touched the electric start button and the engine turned. I pulled the carb tops and lubed the throttle slides and made sure they were free. So I went ahead and filled the syringe with a few CC's of gasoline and fully expected the carbs to leak but to my amazement, no leaks. 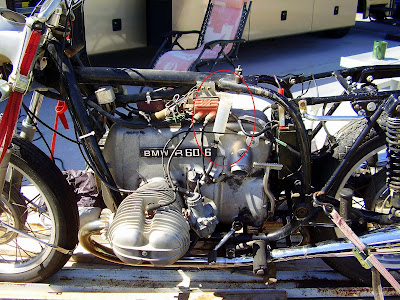 So here we go.....set the choke, hit the starter and the engine started up after a few seconds. She belched out a bunch of smoke from the oil I had squirted in the cylinders a few days earlier. After a few seconds I opened the chokes and the engine turned to a nice smooth idle. The throttle response was a little slow but it was running and sounded real good. 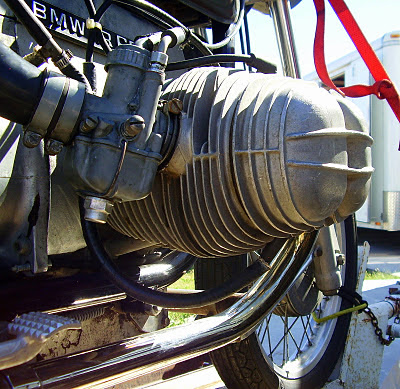 I ran it a few minutes and filled the syringe again to run it a few more. The engine sounds strong so I am happy that the thing will run!
A fellow rider on a motorcycle web site had offered me a free rear fender so I gladly accepted. I also had found a reasonably priced front fender on EBay about the same time so had fenders coming my way. They showed up today so I went after the installation when I got home from work. I had the proper mounting plates and bolts from other bikes I had parted out in the past so the installation went without a hitch. By chance both fenders are black so that is good.
The old girl is starting to look like a bike again. Neither fender is perfect but they look pretty good when mounted. 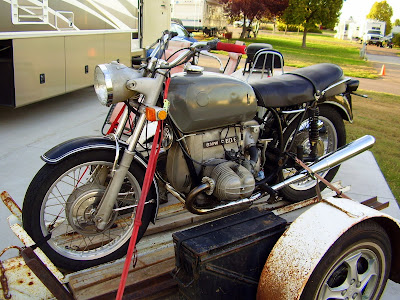 The seat was missing the hinges and luckily the $51.04 , $1.04 seat had both hinges in place. The allen screws were stripped so I had to drill out all of them, luckily I had old saved replacement screws in my bolt stash. New hinges run about $48.00 each so with the salvaged hinges I don't feel so bad about the crappy seat miss-purchase. I removed the backrest and after looking the seat over, discarded it in the dumpster. I placed the seat on the bike and the riding position was terrible due to the forward position....way to close to the fuel tank. I don't have room to haul around a seat I'll never use so good riddance. 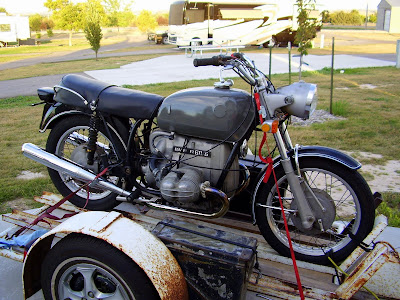 Now I need to hunt down a tail light lense and a pair of rear turn signals. I'll be changing all fluids and filter, flushing the fuel tank and mounting some tires before she is ready for the road. I think it will be a nice low budget rider when it is done. Don't have any "toaster" panels or BMW roundels for the tank but maybe I'll hunt some down at some point. "Toaster" panels are terribly expensive so maybe someone will come along and swap me a touring tank for the bare toaster tank.

My R100S sidecar tug needs a rear main seal, timing chain, etc....I was already thinking about tying the chair onto the R60 while the R100S in under the knife......lol