Parts found a little at a time....

I've been scouring the internet / ebay for needed cheapo parts. Since this is a "Rat Bike" project I won't go over board with high dollar new parts, except in the mechanical department. Function will take presidence over asthetics. Found the light assembly below for $39.00. I will use the signals and the tail light lens. The Front signals on the bike are original 1971 alloy units with the yellow side marker reflectors. The proper rear signals would be similar with red side marker reflectors. Original units are pretty tough to find as they were a 1971 model year only signal. When found they bring big bucks. I might install black plastic units in the front and sell the alloy units. 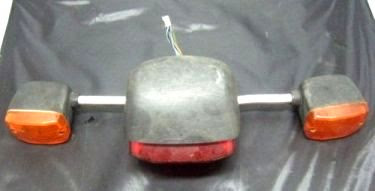 These well worn BMW "roundels" came up on ebay for $45.00 so I sprung for them for the Toaster Tank. New reproductions would have run around $140.00 for everything. The seller of the R60 said he might have the Toaster Panels but so far he hasn't produced anything for me. 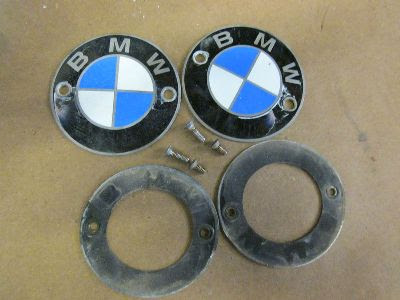 Since the R60 might be delegated for side car hauling for a short time I thought I'd better find a friction damper assembly since it was missing. $23.00 bought this one. 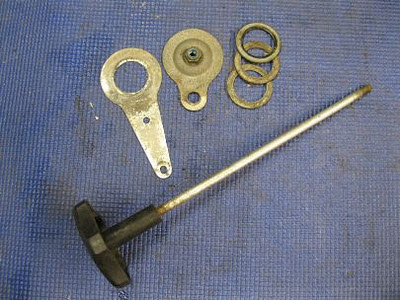 The lower keeper clip was missing but I had one laying around. 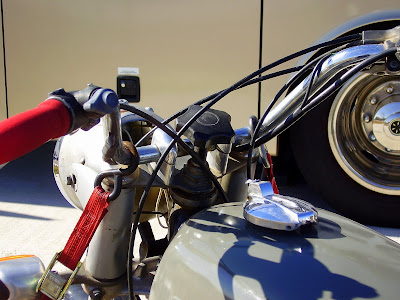 I removed the Krauser saddle bags and rack from the R65 to see if they'd fit....and they do. They sit a little further back than original bags would but that's OK. I mounted them on the bike while sitting on the trailer so I'll need to readjust them when the bike is sitting on the ground. I think the angle is off a little.(?) 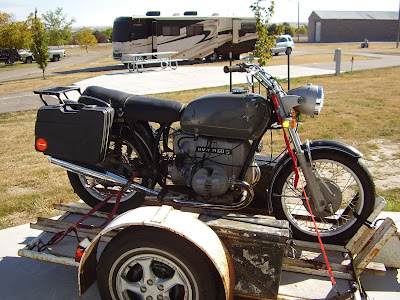 I'll need to be acquiring tires for the bike at some point, and my R100S tug is about ready for tires also. I see some Toaster Panels selling on EBay but am not sure how serious I want to get about them. They'll likely go for around $200.00.
When we get to Yuma AZ. I'll get really serious about getting the bike in running order.

I have found a very low mile 1978 R60/7 locally which has been disassembled. $800.00 will bring it home so I might take that one on too. It is a Euro. Spec. machine with only 7000 Kilometers on the clock. Appears to be pretty good. I'm waiting for some better photos so I'll post some when I get them.
Posted by BMW HACKER at 11:27 AM

if i could be a fly on your wall for awhile, man, i could learn some stuff. love seeing progress on your different projects...