Received my "new" Tokico Suzuki brake calipers and found them as stuck as the ones they are to replace.....went on line and found seal kits to rebuild them. First step was to free the stuck caliper pistons......Proceeded to give them a shot of WD 40 on a daily basis. This went on for 10 days. Researched techniques for freeing up the pistons...air pressure, grease injection, or using the master cylinder to pump them out......decided on the latter..... 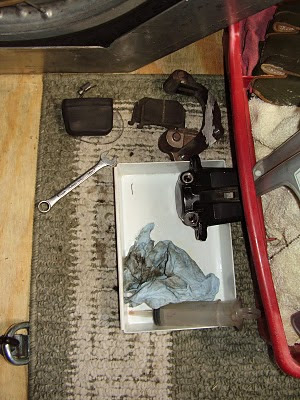 Proceeded to rebuild the master cylinder upon receipt of the rebuild kit. Everything looked pretty good in the old cylinder bore....some rust which was carefully removed with crocus cloth....completed the master cylinder rebuild and installed it. Spent hours attempting to get the cylinder to pump oil...no luck...took a nap instead.
Finally used a syringe to force fluid through the cylinder pistons. That removed the air lock in the cylinder. Once that was achieved the caliper pistons pumped right out. Cleaned up the pistons and bores and reassembled. Rebled the system and now we have brakes!...Finally! 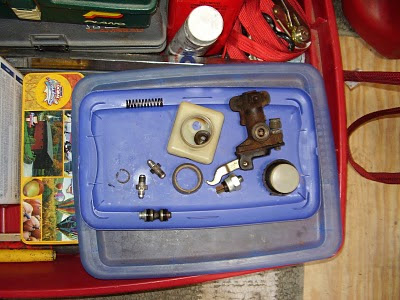 Today I take another shake down run and figure out how to mount the new hydraulic steering damper cylinder.