Friday morning was calm as the blasting wind quit about at sunrise. The weather was perfect for riding. The view below is looking back towards the previous nights campsite. There is a gravel back road which cuts over to Patagonia but I wasn't willing to risk running on gravel as a flat tire would be a real problem. I stopped in Green Valley for coffee and a bit of breakfast. Then on to Nogalas AZ. Nogalas is situated right on the Mexican border and is a very busy town. A lot of border traffic and trucks everywhere. I fueled up there and headed north. 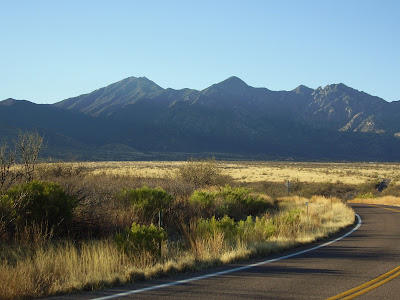 Thirty miles north of Nogalas I was in a little canyon area and the scene below caught my eye. Turned around to check it out.You see a lot of little shrines along the road in the south. The Mexican folk down there are serious about setting up and maintaining these shrines. This one is a bit more elaborate. It was carved into the rock and then had a steel gate installed. I walked up and it was chock full of religious items, candles and little items. 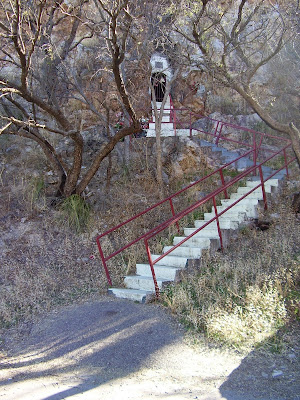 This tells about the origin of the shrine and a little history about it. 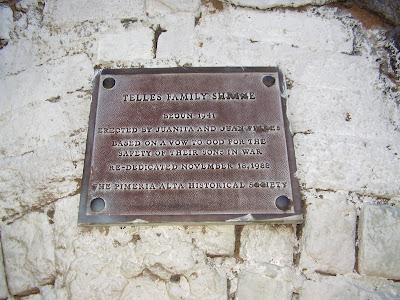 Patagonia AZ. appears to be a quiet little town. 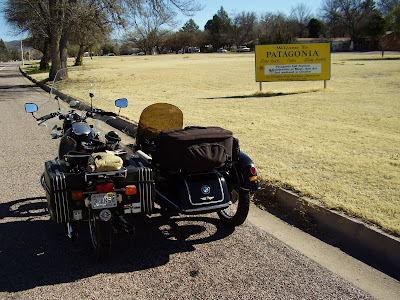 I headed north and was planning on turning just past Tuscon. Had to run the freeway for a few miles. They had about 4 or 5 exits closed going through town and before I knew it I had passed my turn by 20 miles. Pulled off at Pichaco Peak and refigured my route. Ended up going through Florence AZ. which is a major prison town. They have a number of prisons and it appears to be the main industry. Darian and I have both worked in prisons at one time and neither of us think we would want to make a career of that. I ended up in Superior AZ. for a food stop and a break. Found a little C-Store that had a Mexican Deli which was good (and cheap). Decided to head up towards Miami / Globe AZ. and camp up at Roosevelt Lake. 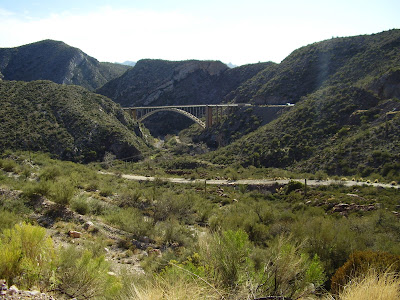 This is one of many bridges between Superior and Miami. It is a great road with canyons, tunnels, and fantastic scenery. There was a lot of truck traffic though. This used to be a big mining area. 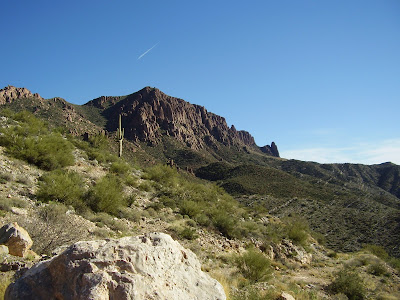 There is a lot of rugged country in this area of AZ. 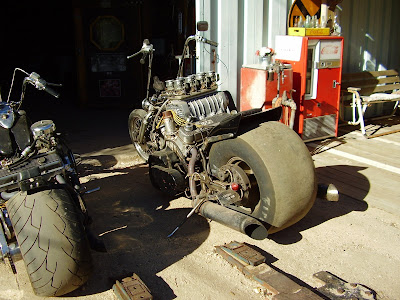 I was cruising up the road and I glanced over and saw this massive rear tire. Had to u-turn and go back to check it out. Visited with the builder of these monsters. The one on the right has a chevy 427, supercharged with 8 carburetors. Scary! The one next to it is a 350 chevy. The seats are at about a 45 degree angle and about 4" wide. Pretty spooky. Think I'll pass on one of these. 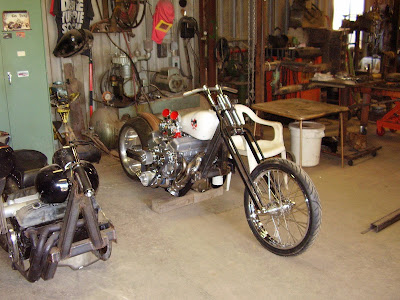 This is one with a 383 motor he is building for a customer. No front brakes! Next to it is the beginning of another one. He builds them with 2 - speed auto transmissions. He showed me a photo of one he built in the 70's with 2 - small block chevy motors grafted together. 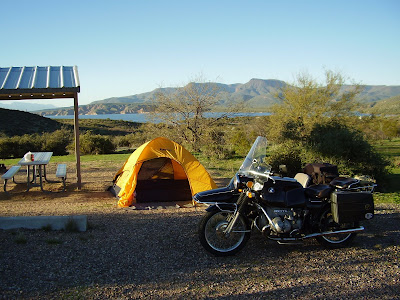 Made it to Roosevelt lake by 4:30 PM in time to get set up before dark. The coyotes were going crazy for an hour or so. This place has a huge campground with very few people. I tried to pay but a sign said you had to pay for a pass at the local stores / businesses. I wasn't about to drive back 20 miles to do that. No one ever came around and I was out of there by 7:30 the next morning so had my 2nd night of free camping.