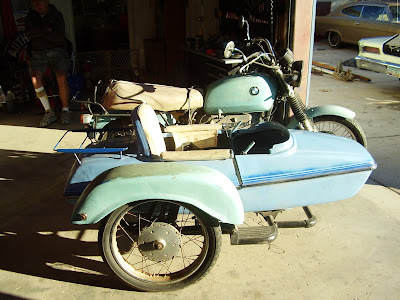 I spent a couple of days rigging things up after a lot of Internet research on "side car attachment for dummies / rookies". The attachment was identical to the R90 but they used the lower foot peg flange for one of the mounting points. I've read that this is not a good idea but went ahead with it. After some trail and error the bike was manageable although as a rookie the first rides were quite a bit spooky. Pulled off a quick wheel bearing maintenance , tire replacement, 6 gallon touring tank, a home made wind screen, a quick bit of body work and a paint job. We then took off on a thousand mile shake down ride to an Airhead Rally at Death Valley Ca. This ride was an eye opener and brought forth the many weak points of an R75/5 tug.......too high geared, not enough fuel capacity, under powered, engine heating, to name a few. We had so much fun on our 1000 mile shake down run that the decision was made to keep the hack setup. I had planned on selling off the R90 to recoup some of the investment but after realizing the potential of using the R90 engine top end for more displacement / horsepower I decided to take the hack project up another level. I spent the next three months of off time hunting down spare parts and acquiring odds and ends to do the necessary upgrades. Also sold off unneeded parts via the Internet to help support the job. Found that the R90 top end was in great shape and required only a cylinder hone and valve regrind. I replaced the piston rings also. My original engine was due for push rod tube seals so an engine tear down was coming anyway. 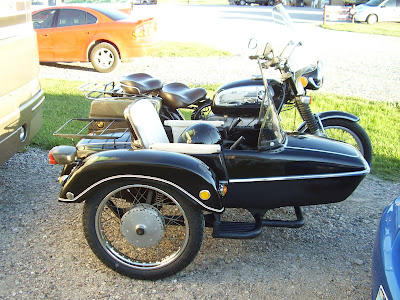 Did a lot of scrounging and eventually came up with the majority of things I felt necessary. I originally rigged a spare BMW "R" Bike tail light on the side hack but my home made bracket was prone to vibration and broke twice on me during trips. I hunted down an old reproduction Hella tail light which worked fine. A lucky "Craigslist" purchase bought me a $100.00 1976 BMW R60 with a Heinrich 9 gallon fuel tank. The bike was quickly stripped of what I needed and sold off the next day. 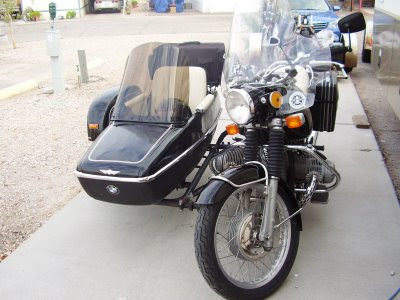 Throughout the summer a lot of additions were made and we've racked up 6000 miles since February. Changes to date; R90/6 Pistons / Cylinders / Heads
Re Jetted 32mm Bing Carbs (took quite a bit of experimentation)
9 Gallon Heinrich fuel Tank, NOS fuel cap, used tool box cover
Period "Henry's" Floor Boards
32:9 Final Drive (replaced stock 32:10 drive)
2 additional quart oil pan. (4 quart capacity now)
Dip Stick Oil Temperature gauge
NOS MotoMeter Tachometer / Speedometer
1968 R60/2 US front fender and NOS Braces
Dual "QSL Tuetonic 1000 mile solo seats (stock seat sucked)
Luftmiester header / muffler shields
Bar End Mirrors
New Side Car Windscreen
New Ultra Leather Side Car Interior
Hella Reproduction 50's Tail light
Found some new "Nelson Rigg-Pak" Luggage very cheap on eBay which works great on the side car. I re upholstered a BMW Stock Long Wheel Base Seat to match the side car interior but did not like it. I still need to deal with the poor braking of the /5 motorcycle. These are good brakes for what they are but not suited well for a side car. I have an updated Russian Sputnik Sidecar wheel w/ drum Brake which will be attached as soon as I can. I need to have a new axle fabricated to accomplish that installation. I have practiced some panic stops with the bike and surprisingly it is not that bad, but....under a surprise panic stop it wouldn't be too good. I'm stating away from an Earls fork as I still ride the bike solo at times. Future additions: A luftmeister auxiliary fuel tank, modified side covers, upgrade alternator to a 280 watt ( have that from R90/6), some sort of driving light (after I have enough juice to power it). Who knows what else. A proper side car sub-frame would be nice but the attachment has so far been very stable and haven't had any issues after over 6000 miles of mostly crappy roads. Half the fun of the side car has been "personalizing" it. I took pride in my mostly stock Toaster BMW, but after 13 years just got bored and wanted to try something different. This journey is definitely that! 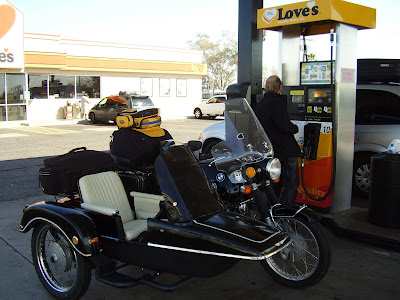 Loaded to the "gills" during an Arizona Road Trip. Covered 1500+ miles in 5 days. From Interstate to the crappiest two lanes imaginable. 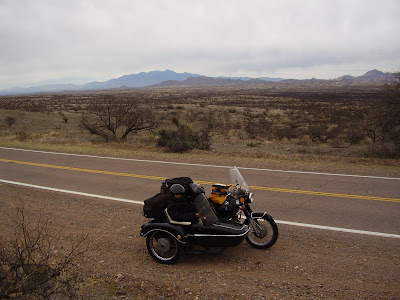 Out in the middle of nowhere AZ. Poor old rig is packing a lot of weight.
Posted by BMW HACKER at 11:31 PM

The Jupiter Hack was made for the smaller East European 2-stroke bikes so is rather light, but I like the light weight factor. It does take a little time to get used to it. Fast right hand turns can get a little "light".

I have obtained an old Jupiter sidecar which I hope to fit to a 1984 R80RT BMW. Is there any info available on the construction / dismantling of the bodywork?
In particular removal of the trim on the centre line of the body and the separation of the two body halves!
Regards.
Bill Jones.
County Durham. England.

I have not had any luck finding any parts or information for the Jupiter Sidecars since I purchased it. I did have a friend send me a corner trim piece I was missing from Eastern Eurpoe. The trim pieces are easily removed with the removal of the inside fasteners, and the hood comes off easily after diconnection / removal of the slider guide rods. I had mine disassembled completely in an hour. Good luck with your project. Due to parts unavailability you'll need to use your imagination. If you find a "parts hack" you'll be in good shape.